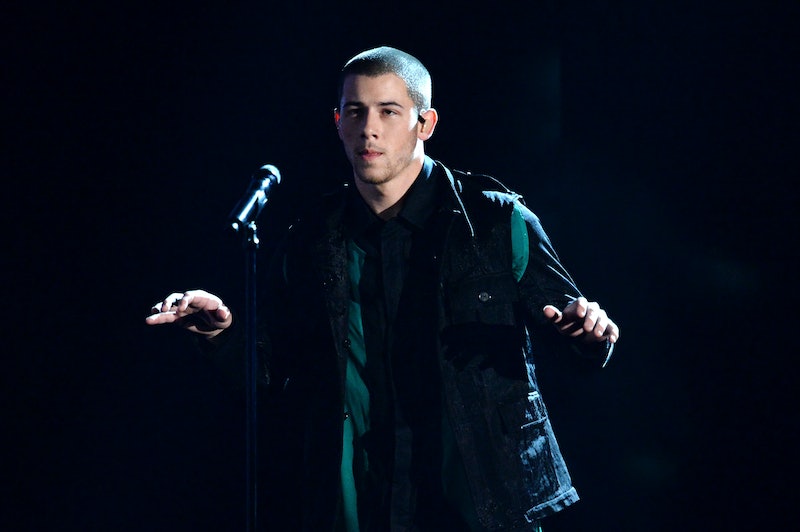 If you thought you were the biggest fan of Joe Jonas' band DNCE, then it's time you revaluate. Nick Jonas filmed DNCE's Billboard Music Awards performance on Sunday night, while rocking out to "Cake By The Ocean" alongside BFF Demi Lovato, and it was basically the cutest thing in the world. The Jonas Brothers days might be behind them, but it's clear that the Jonas brothers never stop being, well, brothers, and supporting each other in their musical careers. Not only did Nick know all the words to "Cake By The Ocean," but he whipped out his phone to take a Snapchat of his brother performing, acting like a proud soccer mom or something. I'm not sure whether to cry or scream or cryscream. It's just too much cute for me to handle, guys.

Joe was really throwing his all into the performance. There was red balloons and confetti all over the place, and he even left the stage to go out into the audience and dance with audience members, escorted by security and flanked by all the camera phones that whipped out at the sight. Listen, I'm not a huge, huge fan of Joe Jonas, but I am a huge, huge fan of DNCE — and I'm a huge fans of brothers supporting each other as Nick and Joe clearly do. I wouldn't be surprised if Kevin and Frankie were at their respective homes with their televisions turned on, watching their brothers totally crush it on stage, too.

Seriously, how cute is that? I cannot with the Jonas brothers, you guys. Nick and Demi Lovato's friendship gives me life, and Nick rocking out to Joe's performance gives me life.