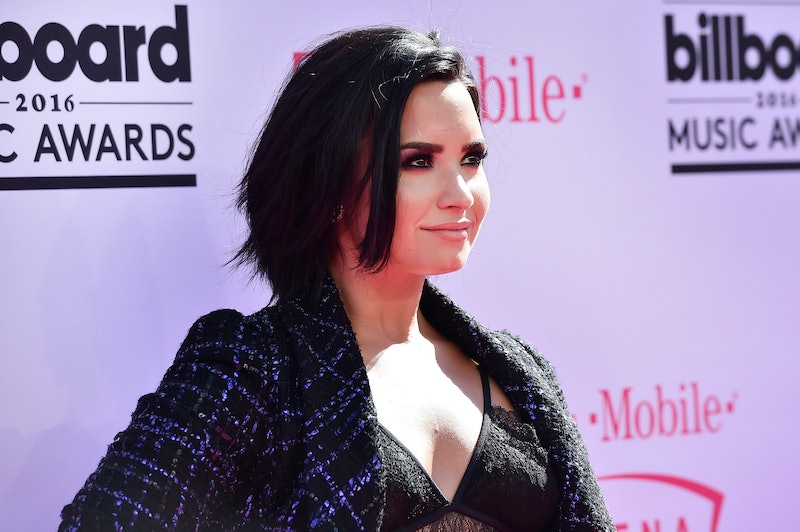 The 2016 Billboard Music Awards were perhaps more the 2015 Billboard Music Performances, but that's totally fine, because there was a wide variety of acts and many of the performances were super entertaining. At one point in the night, soon-to-be tour mates Nick Jonas and Demi Lovato took the stage for back-to-back songs. First, Jonas performed "Close", his duet with Tove Lo. And immediately after, Lovato sang her hit "Cool For The Summer." While I unabashedly love the song, what stood out to me during this particular rendition was Lovato's outfit. Demi Lovato wore a dress that seemingly referenced HB2 during her BBMAs performance.

The 23-year-old singer wore a dress (well, more of a see-through tunic) with a sparkly unisex bathroom symbol on it. While Lovato didn't specifically mention the new North Carolina bathroom laws during her performance, the fact that she recently spoke out about HB2, makes me think that the outfit choice was not a coincidence. The law blocks N.C. counties from protecting against LGBT discrimination, including the barring of transgender citizens from using bathrooms matching their gender identity.

Lovato and Jonas recently decided to cancel the North Carolina show that was scheduled as part of their upcoming tour. In a statement released to GLAAD, Lovato said,

After much thought and deliberation, Nick and I have decided to cancel our shows in Raleigh and Charlotte. One of our goals for the Honda Civic Tour: Future Now has always been to create an atmosphere where every single attendee feels equal, included, and accepted for who they are.

North Carolina’s discriminatory HB2 law is extremely disappointing, and it takes away some of the LGBT community's most basic rights and protections. But we will not allow this to stop us from continuing to make progress for equality and acceptance.

Some of Lovato's fans noticed her outfit, as well, and couldn't be more proud of the singer.