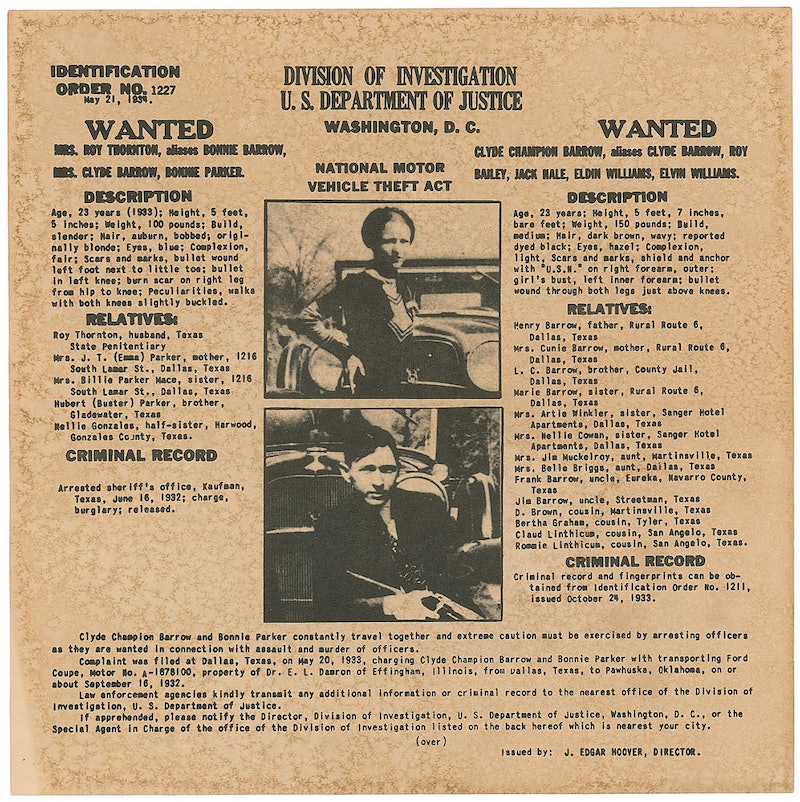 Eighty-two ago on May 23, police shot down the wanted outlaw couple Bonnie Parker and Clyde Barrow. Their ultimately tragic story, which takes place during the Great Depression, is charged with nostalgia, romance, and a distaste for the status quo, making it one of America's favorite crime tales. The two met in Texas in 1930 when Parker's husband, to whom she was married at just 16 years old, was in prison. A string of robberies landed both Parker and Barrow in jail intermittently over the next several months, but they weren't persuaded to settle down just yet. Together, they chased a life of crime until they were ambushed by police in 1934 and both shot to death.

Playful photographs of the two wielding their guns and posing suggest that life on the run was glamorous and exciting. But in reality, both accumulated some pretty serious charges. According to the FBI, the two were suspected of having been involved in 13 murders, several robberies, and a kidnapping in affiliation with the Barrow gang. Though their escapades turned deadly, Barrow, in particular, preferred to kidnap police and let them free with some money to find a ride home. The "Bonnie and Clyde" story has been perceived as one full of fun and games, but this progression of photos shows just how dangerous, and even fatal it actually was.

Parker and Barrow's criminal career was short-lived, only lasting for four years.

2) The Photos Prompted A Media Craze

Parker allegedly sent this photo of herself to the police station. It has been circulated for decades.

3) She Was Rebellious From A Young Age

Though Parker committed her life to Barrow, she remained married to high school sweetheart Roy Thornton, who was in prison at the time. Along her inner thigh, she had two hearts tattooed with their names inside.

This wanted poster was issued just two days before they were killed. The pair was affiliated with the Barrow gang, which had included Clyde's older brother, among others.

Barrow and Parker committed crimes throughout the central United States. The photo of the notorious hideout was taken by Barrow's sister-in-law, Blanche. The couple rented out the apartment for just a couple of weeks before a shoot-out with police officers forced them to escape. Two officers were killed on the premise.

Blanche Barrow, who was affiliated with the Barrow gang, was captured by police officers in July 1933. At any given time, this could have been Barrow and Parker. And as more members of the gang were discovered by police, the couple had to figure out how to operate under the radar without help.

7) Both Had Been Seriously Injured

In an attempt to avoid hard labor while imprisoned at the grueling Eastham State Farm, Barrow cut off two of his toes and never quite regained a sense of balance. After missing a detour road side, he later drove into a river bed, causing the car battery to gush acid over Parker's leg, of which she also never regained complete control.

The two were killed instantly after being ambushed by police in Louisiana. Officers found out they had thrown a party at Black Lake just two night prior and were expecting them to travel via the highway along a town called Sailes on their way back.

After the ambush, authorities found an arsenal of weapon from the car. No matter how many guns they carried, the two were finally outnumbered.

More like this
The Dog & His Handler In 'Gunther’s Millions' Are Worth, Well, Millions
By Gretchen Smail
A New Netflix Doc Will Explore The Unsolved Murder Of Jill Dando
By Sam Ramsden
This First Look At 'The Gold' Shows Jack Lowden In A Whole New Light
By El Hunt and Sam Ramsden
This Is When Netflix Is Going To Start Charging You For Sharing Passwords
By Darshita Goyal
Get Even More From Bustle — Sign Up For The Newsletter
From hair trends to relationship advice, our daily newsletter has everything you need to sound like a person who’s on TikTok, even if you aren’t.