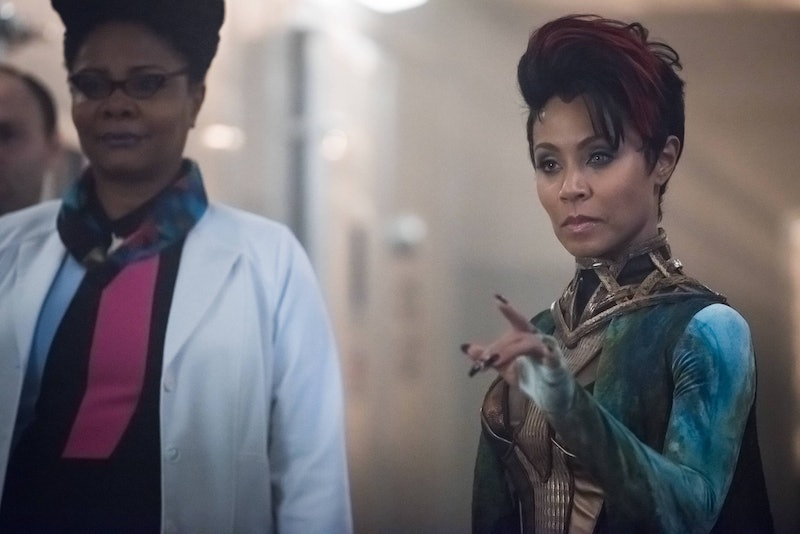 While the Gotham Season 2 finale made it seem inevitable that Hugo Strange would get away with all of his evil deeds, in the end, the tables were totally flipped on the evil doctor. Not only was Strange carted away in a police car while protesting his innocence, but Fish Mooney and Hugo Strange's experiments escaped, all released into Gotham City. It looks like Strange wasn't even able to ensure the safe delivery of his "monsters" to the woman who is giving him orders. Instead, Fish used her newfound powers of mind control to escape from Arkham, leaving Strange and Ms. Peabody behind.

And by a lucky coincidence, Fish's former colleagues, the Penguin and Butch Gilzean, just so happened to intercept her escape, nearly killing everyone on board the bus she used to get away. But when Fish appeared, the two gangsters acted like they had seen a ghost — which they basically had, since the last time they saw Fish, they were throwing her off a building. It's left ambiguous whether or not Fish had to use her mind control on those two in order to get a reaction out of them, but even though this thread was hanging, it means that Fish Mooney is back, and could be a huge part of Season 3.

And as for the rest of the prisoners that Strange was experimenting on, Fish abandoned them once Penguin arrived. But before Strange, Peabody, or the masked woman could get to the bus, a homeless woman set all of them free. The scene was all from the homeless woman's point of view, and her failing eyesight left most of the "monsters" as shapeless figures emitting growls, gasps, and emitting all kinds of superpowered signs like smoke and twisted limbs.

There's even what looks like a Bruce Wayne clone. Given that Bruce is still alive, he can't be part of the resurrection trials. But since Indian Hill and Wayne Enterprises are closely intertwined, this seems like part of a plan to either discredit or replace the real Bruce — who's even more just and civil-minded than his parents on this show — with a long-haired impostor. The real Bruce is planning to take on the council and destroy the power structure that's controlling Wayne Enterprises. But this fake Bruce might put a huge wrench in those plans when Gotham returns for Season 3.