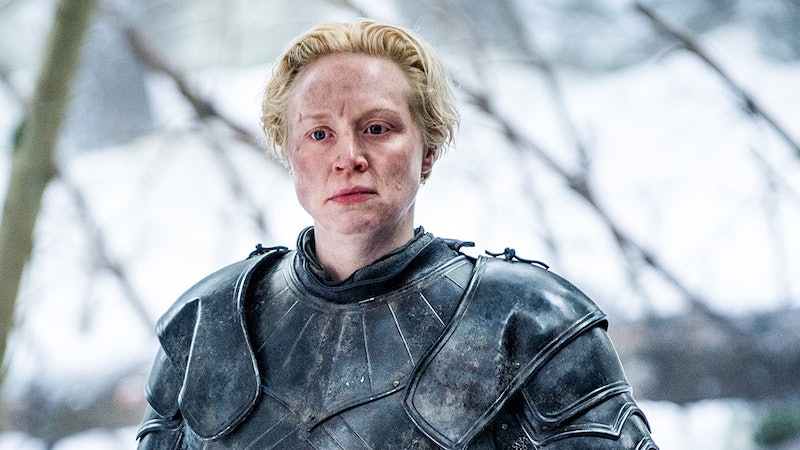 Women and girls are not supposed to be big. Not tall; not broad; not fat. They certainly aren't meant to take up space or traumatize passerby with their protruding muscles. Or at least, that's what we're often told. For those reasons and more, Brienne Of Tarth on Game Of Thrones is a crucial character — and arguably for young female viewers especially. She's exactly the sort of babe a broad-shouldered, 14-year-old, 5-foot-10 version of myself would've loved to have as a role model; and exactly the sort of woman I hope my own hypothetical future daughter might have around her as well.

Although the Brienne we see in the HBO adaptation of A Song Of Ice And Fire, played by 6-foot-3 British actor Gwendoline Christie, is by no means visibly fat, she towers above the vast majority of characters (save for maybe The Hound or The Mountain). Her physical strength practically demands attention. Her bone structure and height cannot be shrunken. She's the very embodiment of taking up space — thus defying one of the cardinal pseudo-requirements of femininity thrust upon so many of us. Although her personality, to a degree, is marked by humility and introversion, she could never be a wallflower. She's simply too big. She stands out too much. She defies too many expectations.

From experience, I can say that there are many parallels between growing up a large woman — tall and wide in bone structure — and growing up a fat one. One of the most striking of these is the simultaneous over-sexualization and de-sexualization of one's body.

Most folks who come across Brienne are struck by her physique immediately. Men crack jokes about whether there's a "real woman's" body beneath all that armor. They call her ugly repeatedly — drawing comparisons between Brienne and farm animals here and there as well. Women, on the other hand, poke fun at Brienne's inability to curtsy while eyeing her up and down with looks of disgust and confusion. She has never been with a man; the brief feelings of love she may have had for Jaime Lannister went more or less unrequited and later refuted by his sister/lover Cersei. Just as so many fat women are conditioned to think, Brienne does not believe that she deserves romance or sex, because she does not fit into the confines of what womanhood and femininity are ~supposed~ to look like.

And yet, most men feel entitled to speak of her and her body as they wish. They feel entitled to deem her free for the taking. When Brienne and Jaime are captured by a group of Roose Bolton's men in Season 3 — aka the father of the closest thing Game Of Thrones has to Satan incarnate — they prepare to take their turns raping her. Granted, these are individuals who have constructed existences colored in the murder and assault of more human beings than we could likely ever count. But when it comes to Brienne, they are simultaneously fascinated and disgusted by her. Locke, Roose's bannerman and the one who commanded his men to take Brienne into a tent as she writhes, screams, and attempts to escape, even tells Jaime, "I've never been with a woman that big" — an air of excitement to the new experience he's about to have.

Jaime Lannister thankfully saved Brienne from being gang raped that evening — but the notion that she should be "thankful" for any kind of male attention being directed her way (even if the attention is coming from violent sources) never quite diminishes. After all, she does not look as ladies are expected to look. She prefers armor to brocade evening gowns. She'd rather wear pants and boots than dresses and sandals. She has no time for makeup or frills. She's a better sword fighter than far too many men, and this frightens them for reasons beyond safety.

Yet Brienne's strength never waivers. Even when she is thrown into a pit with a bear and nothing but a wooden sword to keep her alive, she remains strong. Even when she is being beaten by The Hound, she is strong. Even when Sansa and Arya Stark both reject her desires to remain loyal to their mother and take them both under her protection, she perseveres and ultimately saves Sansa's life. Despite living in what is very clearly a marginalized body as per Westeros' standards of beauty and acceptability, Brienne is forever loyal, forever kind, forever ruthless when need be, and forever herself.

For instance, when Brienne and Jaime Lannister are in a bath together at Harrenhal in Season 3, Episode 5 (after Jaime has been captive for over a year and has lost a hand), he confesses the story of how and why he became The Kingslayer. It's an emotional ride, and one that leads Brienne to stand up abruptly in frustration. Although viewers cannot see her, Jaime has a full-frontal peak at what is actually beneath Brienne's armor. We see only the naked outline of her curves, but enough to know that her figure is far more traditionally "womanly" than the inhabitants of Westeros have assumed it to be. Jaime himself is floored; his breath quite literally taken away. He has not been in a room with a naked woman for many, many moons — and it's a reminder that Brienne, although physically powerful and overall inimitable, is in possession and control of her own unique femininity.

Of course, the most recent season of Game Of Thrones has alluded to the possibility of genuine romance for Brienne. The great hunk of a Wildling man, Tormund Giantsbane, visibly swoons from the first moment he lays eyes on her as she arrives at The Wall. Atop her horse, Brienne is even taller, even grander, even more visible, and even more magnificent. Our favorite (male) ginger can't get enough, and it shows.

While we have yet to see this relationship flourish, we know that Tormund is a noble and loyal man. He's one of the good guys — much like Brienne. He's also got a healthy sex drive and seemingly knows that there are few things more striking in this world than a woman in control of herself. He does not know much about Lady Brienne as of yet, but it's her beauty and strength that draw him in. It's not a "conventional" beauty per se, but it's valid nonetheless. It's attractive and interesting and different — and Tormund clearly appreciates those qualities. While no one's worth should arguably be correlated to how sexy they read to those around them, the scenes we experience between these two are healthy reminders of the subjectivity of beauty and attraction; healthy reminders to anyone who's ever felt unworthy of love or passion or intimacy because of the body they live in.

The way Brienne chooses to present her body is also crucial to the character. Her armor is more than steel protection. It's a clear differentiator between her and the majority of the ladies of Westeros. There are no dresses in this woman's arsenal, except the one she is forced to sport at Harrenhal, and that makes her markedly different to her peers. Brienne's armor seemingly protects her not only from the physical pain or injury that can be brought upon by fights and brawls and wars, but from the pain that can come simply from being different.

Oftentimes those who grow up in bodies that are stigmatized in any way will try to hide beneath layers of fabrics and garments that obscure our silhouettes. Some might argue that this is Brienne's core reason for utilizing armor, but I would wager that it's the exact opposite. Because of the era and culture GoT is set in, being a big woman in armor makes her stand out even more than being a big woman in a dress. But this way, she is in full control of her image. She is making it so that any stares and glances are coming on her own terms. People will look at her regardless of what she's wearing, but at least in this way she can choose what it is they see. What they see might be a big woman — but they are also seeing a big woman who knows her strength and power.

The remaining half of GoT Season 6 is set to take Brienne to new places: Romantically, politically, and otherwise. But we've already started to see the character deeply develop. In private conversations with Sansa, she reveals a more feminine side to herself that we had not gotten to know beforehand. One that delights in girly conversations with fellow women, and takes note of the personalities of the men around her in a way that only women and feminine people in touch with emotion and philosophy arguably ever could.

Through her, we have seen gender binaries blurred. We have seen the societal definition of "womanhood" stretched, torn, and completely shattered. We have learned that women do not look or feel or behave in one way. We have learned that women can be just as strong, powerful, and fierce as the men in armor around them. And we have discovered that having a good heart and a good sword hand are not mutually exclusive. Brienne is not a stereotype for femininity, and that's precisely why she's invaluable to young women everywhere.