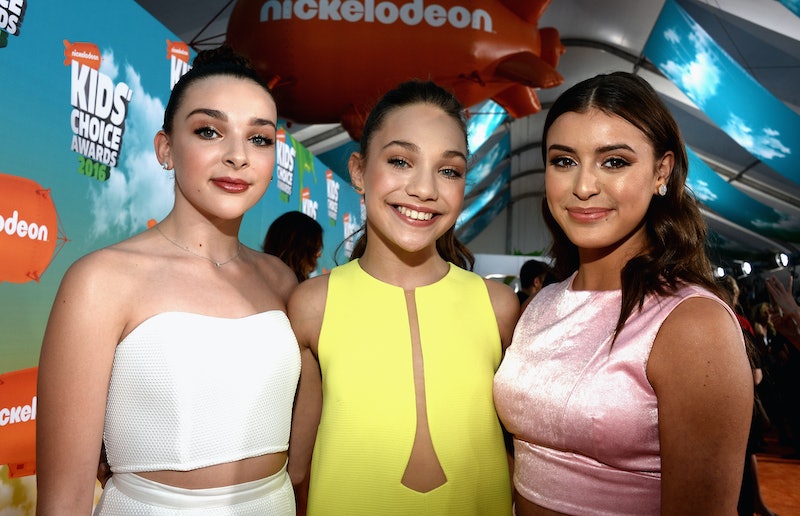 When Maddie Ziegler decided to move on from Dance Moms and Abby Lee's Dance Company, she faced a lot of resistance from Abby and a lot of conflict over her final performance. But, Maddie has always had a group of close friends among her fellow dancers, particularly Kendall Vertes. Although, after leaving Dance Moms, are Kendall and Maddie still close friends? While Maddie is definitely busier these days, working on movies, judging on So You Think You Can Dance, and starring in more Sia music videos, she will always make time for her friend Kendall — these two are definitely still BFFs. They post quite a few pictures on Instagram and Twitter of them meeting up and hanging out, both for professional reasons and just because they're two teenage girls who love to document their lives and friendship online.

Kendall has always been by Maddie's side on Dance Moms. She even broke down in tears when what should have been her first duet with Maddie turned into a solo that Abby wound up giving away to JoJo. Kendall has been learning more every season, and sticking up for their collaboration — even if Abby wound up making the ultimate decision — was just one of many ways that Maddie and Kendall's friendship is still very important to both girls. Here are some of the sweetest moments exchanged between these two BFFs recently that prove no amount of work or distance can keep these friends apart.

When They're Missing One Another

Even though they're both from Pittsburgh, they must have to spend more time apart than usual since they're both so busy. That's a totally relatable BFF struggle.

When They Make Time For One Another

And, when they do get the chance to hang out, Kendall and Maddie are super excited.

When They Bro Out

Note the black and white filter in order to emphasize the seriousness of this hang.

When They Support Their Other Friends

Maddie and Kendall are helping their mutual friend Alexandra Chang's line of T-shirts, Zeitgeist get some traction with their own reality TV fame.

Somehow their friendship is even more adorable in GIF form.

When They Hang With Mackenzie Too

Maddie's younger sister was also a part of the Dance Moms crew, and she's also welcomed into her friendship with Kendall — all of the ALDC girls are tight.

And When They're Practically Family

If you've ever been so close to your BFF that you felt like you were siblings separated at birth, that's how close Maddie and Kendall are.

Even though both Maddie and Kendall have been busy forging careers that include things other than just Dance Moms, Maddie's official departure from the show hasn't done a thing to push these friends apart — if anything, they seem even closer now.