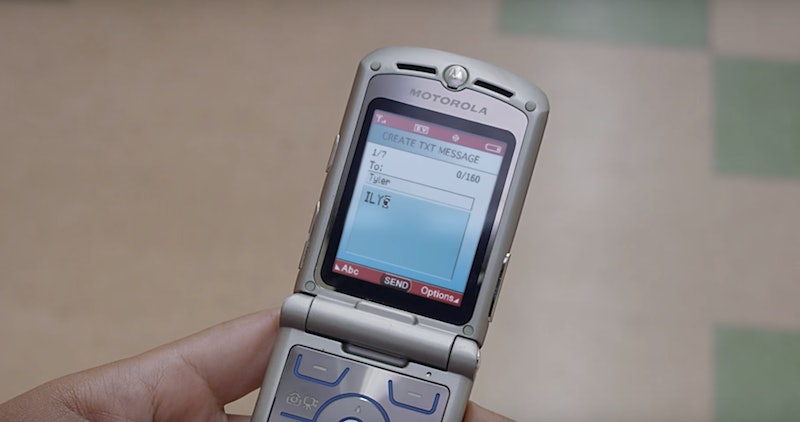 Remember in 2004, when your teenybopper self could pretend to be ~busy and important~ by whipping out your pink RAZR that you low-key shared with your little sister and taking a backwards-camera-facing selfie with your prepubescent squad? Well, folks, prepare to relive the glory days, because Lenovo just teased that the Motorola RAZR flip phone is coming back. With a 45-second spot on YouTube featuring some very 2004-looking teens texting on T9 like the pros we once were, they let the masses know that your ultimate Cool Girl status symbol will indeed be resurrected. Details will come on June 9 at the Lenovo Tech World conference.

Now, I know what you're thinking. We have smartphones now. How on earth would a flip phone integrate into our touchscreen-ruled lives? Consider this: How long has it been since you hung up on someone in a huff and they really felt the impact of that dropped call? Without the slam of flip phone echoing on the line, how does anybody truly master the passive-aggression of phone politics anymore? So there is at least one compelling reason to bring it back.

That, and I'd really love to watch all the tech-savvy Gen Z punks try to use T9 and squirm.

In all likelihood, though, the phone will be updated to our 2016 standards of design. Lenovo plans to reveal a whole slew of new models at the conference, and although we don't have any specifics about this one aside from the blast from the past, we can pretty safely conjecture that it will include touch screen technology. The real question is how exactly they'll incorporate the flip phone aspect.

As it turns out, a flip phone made according to our modern expectations actually opens up new realms of possibility. We are so ~advanced~ as a society that it's quite possible that this would allow for multiple screens on one phone. Imagine having Facebook, Twitter, and your text messages open at the same time. You'd never be able to safely cross a street in New York again!

No word yet on what exactly we can expect, but all will be revealed come June 9. In the meantime, I'm putting it out in the universe to anyone and everyone involved in this project: It may have been a long 12 years since we first fell in love with the flip phone, but you will not be able to sell me on any kind of RAZR return unless it still comes in PINK.