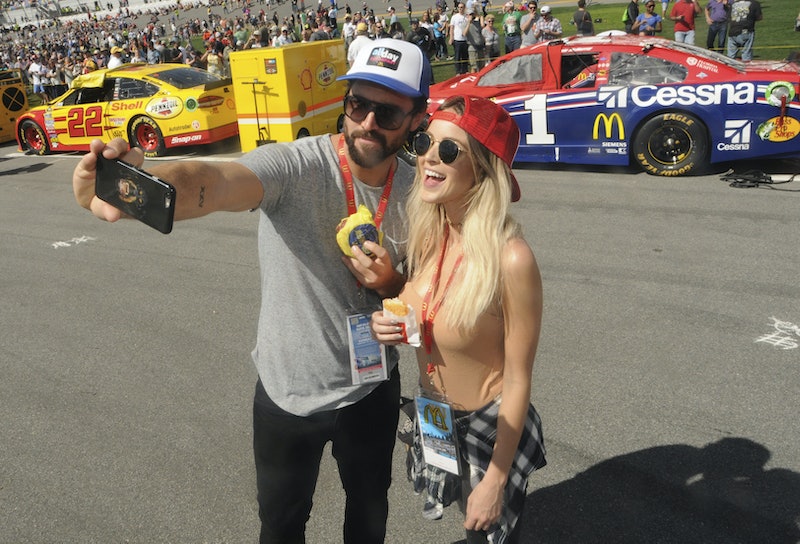 If you use the Internet or social media, there's a good chance you have a Snapchat and follow many of your favorite celebrities. The Kardashians, naturally, are now some of the most collectively followed human beings on Snapchat, but there's plenty of love to spread for those who are fans of the Jenner family in particular. Kendall and Kylie Jenner's older reality star bro has had some pretty big things happening in his life lately, so if you want to also keep up with him, you might be wondering: What is Brody Jenner's Snapchat name?

A lot of us older millennials might have a closer relationship to Brody Jenner as compared to Kendall and Kylie, since we knew about him even before Keeping Up With the Kardashians premiered. For many, he is the Kardashians' step-brother, but for me, he's Brody Jenner, L.C.'s hot boytoy on The Hills, who was always causing trouble with the ladies. Nowadays, Jenner is somewhat of a jack-of-all-trades, and I can't really tell you exactly what he does, besides being a reality star, DJ, sometimes-model, and world traveler. And to document his varied life, last year, Jenner joined Snapchat with a very witty play on his last name: nextjenneration.

I have to say, I am impressed with his Snapchat name. It is clever and it still has his name involved in some way, but it maintains a sense of mystery. Good job, Brody. Unlike his younger sister Kylie, Jenner isn't exactly a Snapchat King quite yet and uses the app like many of us in the "normal world" would. Well, except that Brody Jenner doesn't really live a normal life.

Considering he just got engaged to Kaitlynn Carter, I can assume that his fiancée makes many cute appearances on his Snapchat, because they seem to be very, very in love and joined at the hip.

Another reason to follow Jenner is the incredible locales that he visits. It seems like he is always visiting an exotic island and doing some pretty amazing extreme sport along the way. Jenner and Carter travel a lot and document their adventures, so there's no doubt that his snaps will have some pretty sweet views.

If you're lucky, you might even catch a glimpse of the 32-year-old hanging out with his younger sisters in the wild.

Jenner's also been spotted hanging out with some fellow The Hills co-stars lately, so, um, we all should probably be following him at this point. Just remember "nextjenneration" and you'll be up to date with all your Brody Jenner needs.