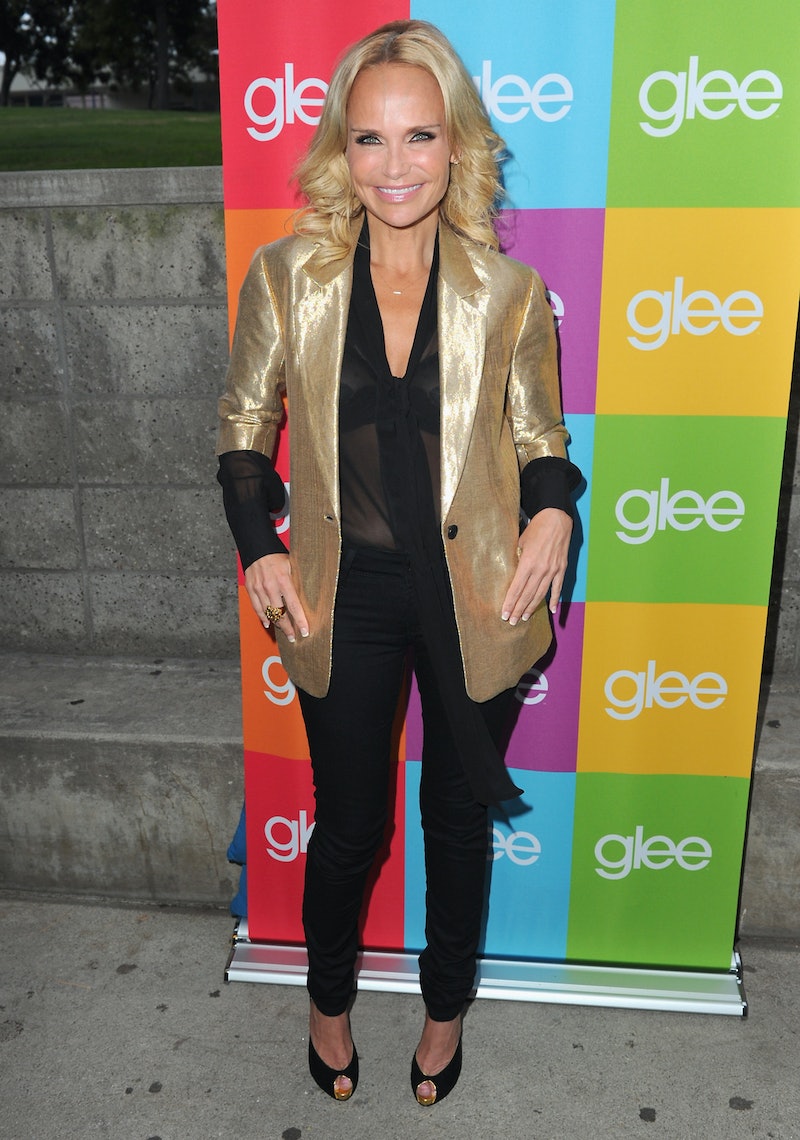 Believe it or not, May marked the seventh anniversary of Glee . Seven! It feels like just yesterday, especially considering I practice full-on Gleek behavior in my everyday life (like re-watching the series DVDs and listening to the soundtrack when I’m sitting on the 405), but hey, that’s just me. Who else can’t believe it? The show’s shining guest star Kristin Chenoweth, who played William McKinley’s hot mess, yet seriously talented alum, April Rhodes. Bustle caught up with the Broadway star amidst the release of her latest on-screen endeavor, Hard Sell, to reflect on the greatness that was Glee and all of her “kids” from the show who have continued to make her proud by kicking ass with their individual careers since they fled the Glee nest in 2015.

Self-proclaimed Gleek or not, no one can deny how iconic the show was in allowing choir lovers everywhere to non-awkwardly belt it out in everyday situations and embrace their true selves, no matter what that looks or sounds like. After all these years, the 47-year-old actress, who was a total choir geek in real life, lights up reflecting on how Ryan Murphy and co.’s creation had such great influence on her life and the lives of so many others.

“For me what Glee [does] is that it continues to make impact. This is why I’m proud of the show,” she says. “When I was in high school choir, it was not cool. There were four of us. Now in my high school there are 300 [members].”

Chenoweth’s overwhelming gratitude is apparent: “I think the short answer is: Thank you, Glee. Thank you.”

She also can’t help but gush about all of her “kids” (including Lea Michele, Chris Colfer, Naya Rivera and Dianna Agron), whom she joyfully shared the McKinley halls with and continues to be so “proud” of. “I’m pulling for each and every one of them,” she says. “I only want greater success than they already have in whatever way that they ultimately decide. Honestly, that’s what I want.”

As for her own character, April Rhodes, Chenoweth says that she couldn’t help but embrace how much of a lovable mess she was (as the rest of us did). For a refresher: April was Will Schuester’s old classmate who fell short of becoming a Broadway star when she unwillingly became pregnant — and then succumbed to alcoholism. Her Hard Sell character is also a struggling addict, but something about Glee’s serious-yet-fun nature caused Chenoweth to fall in love with her character.

I loved it, I loved playing the hot mess and in such a comedic leverage. Glee was interesting and a fine line to walk because it’s such an out-there comedy. It’s so fun for me and what I love to do. I hope Ryan gives me another chance to do something like that again, but maybe something very different because I think he’s a genius and I’m also very proud of him.

But seriously, Ryan, let’s give this Broadway babe a call ASAP. “I agree! He needs to cast me in something,” she says with laughter. “C’mon, Ryan.”

Feud is coming soon, Mr. Murphy! Just throwing that out there. In the meantime, I’ll continue to Gleek out down memory lane, happily re-watching Chenoweth and the Glee crew in my beloved DVDs while praying for a very necessary cast reunion.