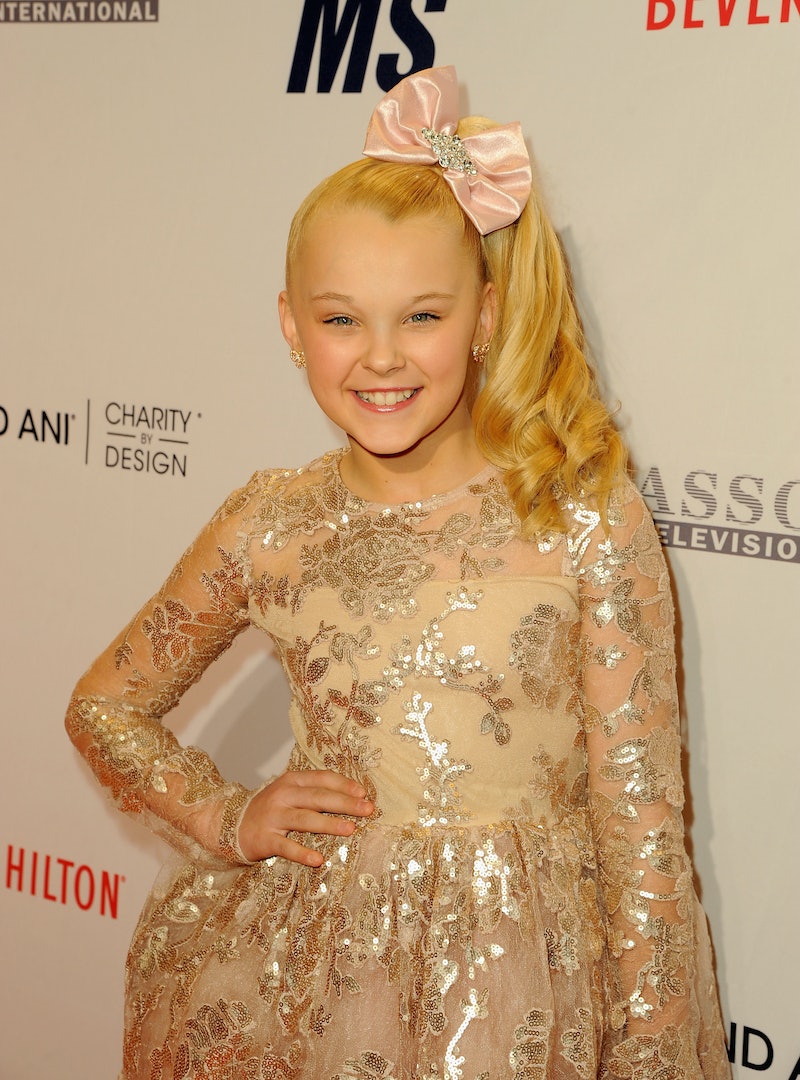 Dance Moms' JoJo Siwa is having a big year. The dancer and singer joined the Lifetime TV series last year, has a hair bow line at Claire's, and she just turned 13 years old. If that wasn't impressive enough, JoJo Siwa dropped a new song and music video for her single "Boomerang" and tells Bustle all about it at her 13th birthday party at Madame Tussaud's wax museum in Hollywood. The Dance Moms star's single "Boomerang" is an upbeat tune about not caring what the haters say and being triumphant over cyberbullying. Siwa says that the song was inspired by the fact that even at 13, she has already experienced a lot of haters on social media herself. "I've gotten a lot of social media hate, and I just don't want anyone else to have to go through that," she tells Bustle on the red carpet of her birthday bash. "And that's how I came up with 'Boomerang.' It's about coming back from the hate."

Siwa has also formed the Siwanators, a movement to "just walk away from the haters and bullies," according to the Dance Moms star's official website. She shares with Bustle her own tips for dealing with unwanted social media attention. "You can't listen to what the haters are saying," Siwa says, sounding wise beyond her 13 years. "You got to be you. If someone likes you, great, and if they don't, great."

The entertaining music video features her mom Jessalynn Siwa, Kendall Vertes and Kendall's mom, as well as JoJo's trademark bows and a dance off in school. The lyrics include powerful statements like, "Hide behind the screen ‘cause they’re just so mean / But we don’t play it like that," and at one point, Siwa even samples Daft Punk, which is always rad.

The experience blended two of Siwa's passions, but the teen says it wasn't easy — both skills are hard work, but she loves it. "There's a lot that goes into both singing and dancing, so I have to practice and work really hard all the time," Siwa says. But the talented teen took a break for her 13th birthday bash, which included treats from Dylan's Candy Bar, dancing under disco balls among the wax figures, and friends from the Dance Moms cast in attendance — including alum Maddie Ziegler.

Siwa joined Dance Moms in 2015 after a memorable turn on Abby’s Ultimate Dance Competition Season 2. Since then, fans and viewers have gotten to know Siwa, and her penchant for big bows in her hair and glittery wardrobe, so much that she now has an accessory line with Claire's stores. But even as she's busy with music, bows, and, you know, becoming a teenager, Siwa is still enjoying filming Season 6 of the show that helped her achieve success at the tender age of 13. "I really like how we're doing different dances," she says of Dance Moms. "We usually just stick to the same old, but now we're branching out and we're doing some crazy stuff, which is really fun."

You can look forward to seeing JoJo and her dances when Dance Moms returns for the second half of Season 6.