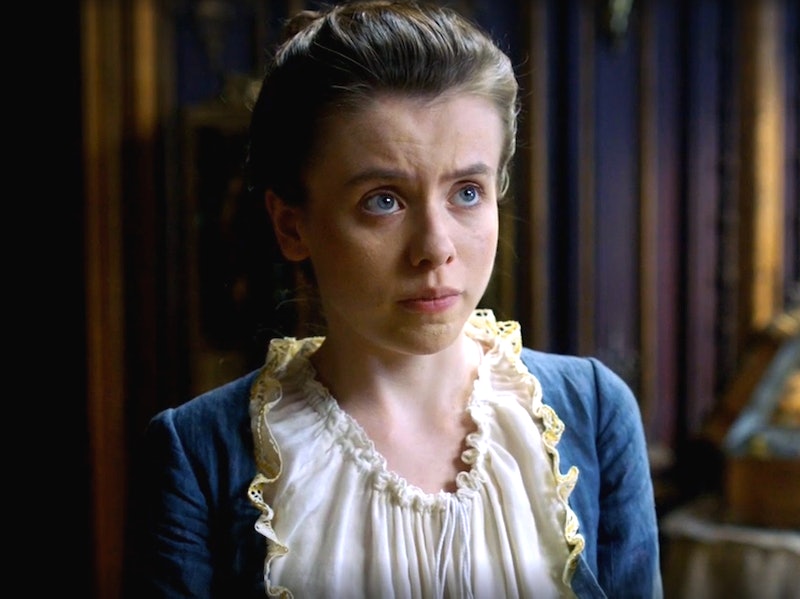 There's a misconception among some people who've never seen a full episode of the Starz series Outlander — that it's a bodice-ripping romance novel come to life. Outlander is that, on occasion. But, it's also a character-driven drama with raw depictions of violence, trauma, terror, and recovery. British actress Rosie Day plays the demure Mary Hawkins in the second season of the show. When fans first met her, Mary was somewhat overwhelmed by 18th century France, her bawdy and frank companion Louise de Rohan, and her pending arranged marriage to much older gentleman. And, then, the worst happened. While traveling by foot at night with her friend Claire Fraser, the group was accosted and Mary Hawkins was raped during the shocking Outlander episode. "In that century, rape was a tool to be used," Day tells Bustle in an interview. "It was a war tool."

The 21-year-old actress says that she's personally much "more confident" than the 15-year-old young woman she plays in the time travel series, though she does feel close to Mary's "kind of innocence." To film the assault scene, Day drew on her role in the 2012 film The Seasoning House as a training ground for portraying the survivor experience. In that movie, Day plays a victim of a sex trafficking, and says she did "lots of research into the experience of women who've been in that situation."

She's emphatic about the supportive environment on the Outlander set throughout the two night shoots spent creating that "harrowing" scene. "They always made sure I was OK and comfortable, and that I never felt out of my comfort zone while doing it," the actress says. Day admits that she hasn't seen Mary's rape scene yet, or indeed any of Season 2 ("I'm not very good at watching myself anyway — I sort of hide behind the pillows."), but she was pleased to hear feedback from viewers that the assault "was handled in a really sensitive way."

Outlander has been praised for being an anomaly in an industry where sex is almost always depicted on screen through the male gaze. Love scenes between Jamie (Sam Heughan) and Claire (Caitriona Balfe) are blisteringly hot, yes, but they're also packed with nuance and emotion. Claire is a vocal, active participantin her sexual pleasure. Heughan's body is on display as much — if not more — than Balfe's. ("All hail Outlander, the best sex on television," Vulture writes.) The show is a beacon of sex-positivity and feminism for so many viewers; why include scenes like Mary's assault? For Day, it was a matter of duty.

"Obviously there's a social responsibility to portray [rape and recovery] correctly," the actress says. "It's a terrible part of life, but things like that still have to be shown because people are experiencing that in real life." As a self-proclaimed feminist, Day says she's proud to be on a show that depicts female pleasure, especially in the eras when Outlander is set. "Sex was about kids, and that's it," she claims. "To show women enjoying [sex] is really important."

At the same time, sex can be a display of power and a way of strategically minimizing another person. She points to Jamie's rape at the hands of Jack Randall at the end of Season 1 as an example of that. "Mary is a pawn in somebody's game," Day hints about future developments. "She's just been used for that, as young girls were. They had no power and they had no say."

So, though Day doesn't believe any piece of media can "wholly capture one person's experience [with rape] because everyone's experiences are so different," the show would be ignoring the realities of its setting and the world in general if it didn't portray sexual violence at all. "Outlander is a very well-rounded show, and I think it shows both sides of [sex]," she says.

So where does this experience leave Mary? Day respects her character's resiliency and quiet strength, which was on display in the scene back at Jamie and Claire's home in the aftermath of the assault. "It was such a sensitively written, beautiful scene," Day says. "And you see the fact that Mary still has hope, even after everything that happened, that she could be with Alex and that she has a future." Unfortunately, her great friend Claire, who "looks after Mary in a way that girls weren't really cared for back then," encouraged Alex to break his engagement to Mary because she believed that their marriage would negate the existence of her 20th century husband Frank. While Day can't divulge where Claire's timeline-meddling goes, she does hint that the "dynamic changes" between Mary and her older friend.

After experiencing the powerlessness, lack of freedom, and physical peril that women lived with during the 18th century, Day has no desire to touch the stones of Craigh na Dun to go back to that time. She'd rather trade places with Claire Randall and visit the years after World War II. "Women had taken over men's jobs and they had a bit more power," Day reasons. "And the fashion was really quite cool then." After a bit of thinking, she reconsiders her answer. "But then I'd like to go back to the time of the suffragette movement, cause I'd love to fight in that," she explains. "I'm quite a 'girl power' kind of girl."

And, it's that spirit of Day's that led to such a dynamic portrayal of Mary's harrowing assault in Outlander.