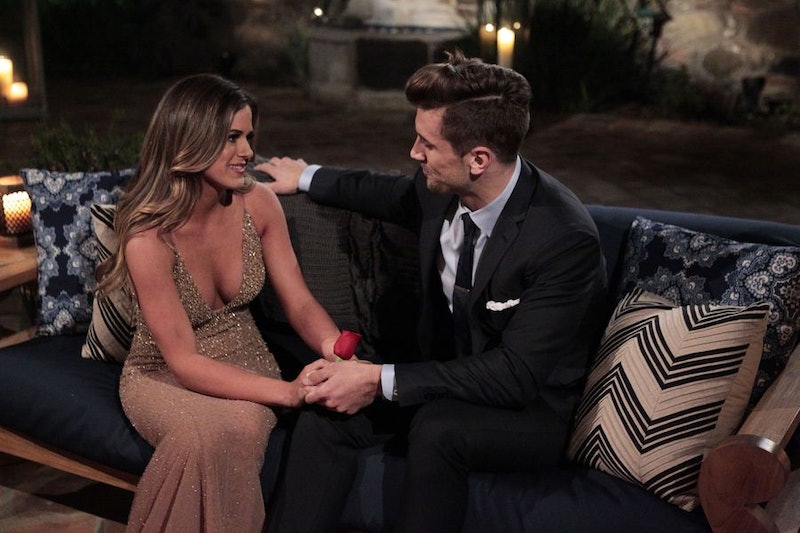 After the long hiatus since The Bachelor wrapped up earlier this year, I am so glad that The Bachelorette is back, especially because I absolutely adore JoJo Fletcher. And who can deny her immediate chemistry with Jordan Rodgers, her First Impression Rose winner?! OK, so it wasn't the most dramatic episode, but according to the preview for the next week, there's a chance that Rodgers could actually be on The Bachelorette for "the wrong reasons." I didn't want to believe it, but now there's even more evidence that what the guys were saying about him could be true. After Monday night's premiere, Rodgers' ex, Brittany Farrar, posted about him on Instagram, claiming that he cheated on her. Chris Harrison might have actually been right when he said that this would be the most dramatic season yet. ABC tells Bustle that they are not commenting on the matter. Rodgers could not be reached directly for comment.

It was kind of obvious there had to be at least a little weirdness between Rodgers and Farrar already, since, judging by her Instagram, she's still really good friends with his brother Aaron's girlfriend, Olivia Munn. Plus, in Monday night's episode, Rodgers did mention a bad breakup, so there seems to be a lot going on behind the scenes here.

After the show, Farrar posted a photo on Instagram with a very interesting caption, which definitely has me wondering what exactly happened here. You can see the image here, and read the caption below:

The way Farrar tells it, Rodgers cheated on her, and that's why they broke up. And just like the guys claimed on Monday night's episode, it sounds like she also thinks that he is on the show for fame. She even tagged him in this post. Savage AF, y'all. On top of that, it would seem that his brother's girlfriend is upset at Rodgers too, because as a fan pointed out in the comments, Munn double-tapped the photo.

As someone who had a lot of faith in Rodgers while watching the premiere, I'm pretty disappointed by this. He and Fletcher hit it off right away, and it was easy to see why. He's cute, he's charming, and he seemed like a really genuine, decent guy — at least, from the 10 minutes or so of screen time we got of him on Monday night. I also thought it was really cool that he didn't mention his brother even once, because I feel like that would have been an easy way for him to grab Fletcher's attention. But maybe that's not who he really is after all. Is Rodgers actually going to turn into this season's villain? Is the show giving him a good edit because they want us to like him, and I fell blindly into their trap? What is happening?

There has only been one episode so far, and no matter what appears on social media, these people are all still strangers to those of us watching at home, so the possibilities are endless when it comes to what's really going on. There's a chance that none of this is true and that Farrar is just bitter about their breakup. I'm looking forward to seeing it all play out, though. And if Farrar is right, I will be sitting here sipping tea like Kermit waiting for her to post more commentary every week. I may be willing to let go of my Rodgers-themed daydreams for more of that!