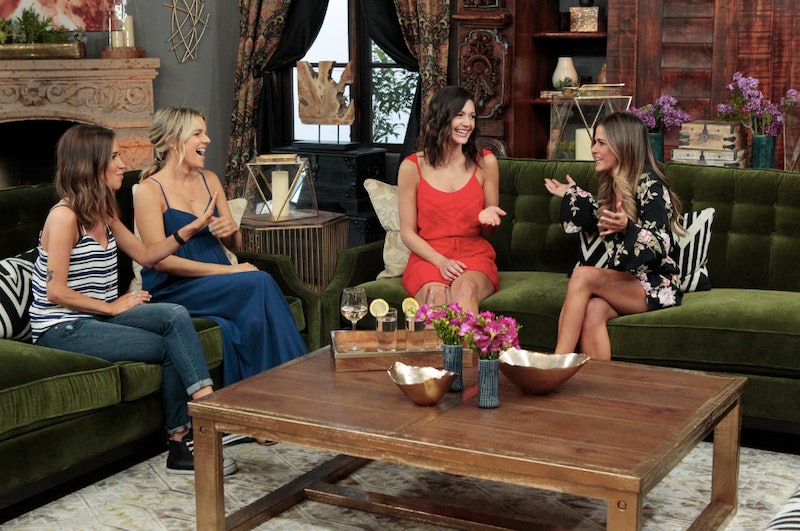 For me, watching The Bachelor/ette is twofold experience. I watch because ridiculous stuff happens, which is especially entertaining to chat about while watching with friends or gossip about with co-workers the next day. But I also watch because I genuinely start caring about whether the Bachelor or Bachelorette will find love. To someone who isn't a fan, it might sound crazy to make fun of something while being actually invested in it, but for those of us who watch the show, that's just how it works. Because of this, fans can end up with some pretty complicated feelings. And for me, one of these tricky situations occurred during the Season 12 premiere Monday night, when current Bachelorette JoJo Fletcher said, "I cannot wait to find the person that I'm supposed to spend the rest of my life with. And be done. And be happy."

First of all, saying that you can't wait to be "done" is perhaps the worst way you could sell a TV show that asks viewers to find value in watching you date people. (That's all good, though, because not 10 minutes later, dudes were showing up on "unicorns" and making the whole thing worth it.) But aside from that, it's just a bummer of a statement to make. I get that many single people feel like they want to be done at times. Dating gets exhausting, and you're like, "Jeez. Can I just get to the part of the relationship where we sit at opposite ends of the couch together while scrolling through Instagram?" But to be setting out on a journey, to use Bachelorette parlance, in which you are about to meet 26 men in an attempt to find one to spend your life with, going in with an "I'm ready to be done" perspective seems 1) to be really rushing things, and 2) to be setting yourself up for failure if you're truly looking to stay with someone forever.

Many of the things stars of this series say sound scripted (see: Jordan Rodgers saying he hopes he's JoJo's "draft pick"). It's a TV show, and that's how it works. But when a Bachelor or Bachelorette says something about wanting to be done, it doesn't sound scripted. It sounds like someone inadvertently confessing that they are desperate to achieve a goal, even though they might not totally know why. And JoJo’s phrasing stands out to me, too. Can she really not be happy until she’s found a husband? I doubt that she's totally unhappy without someone, so why put it this way? It sounds like it's a chore. I would use similar words if I were talking about finally doing the three loads of laundry that have been cluttering up my apartment.

JoJo is not the first star to say something like this. Just last season, Ben Higgins repeatedly shared similar thoughts on The Bachelor. He and JoJo are both so young (Ben was 27 while filming; JoJo is 25). Hearing these thoughts seem to suggest that they're rushing through life. It can be disconcerting, and it fills my brain with a lot of questions. Why do they want to get married so badly? Why do they want to get married so soon? Are they settling for someone who isn't right for them simply so that they can achieve a goal? Why is marriage a goal in the first place? It's the same thing I feel when I look at Facebook. I've been out of high school for nine years, and I constantly see former classmates posting photos of their engagements and weddings. I wonder why so many of them want to do this.

There’s nothing wrong with wanting to get married, start a family, or grow old with someone so they can help you with practical stuff like cleaning the gutters and bonding over the fact that you actually do have a favorite child. I just hope that Bachelor/ette stars are not rushing to that point, because there's also pleasure in getting to know someone and figuring out life together. The show isn't going to going to give us that side of things (it's a reality show that films over a set period of time and loves drama; I wouldn't expect it to). But the contestants and stars should recognize that there's more to a relationship than the traditional milestones, and not go into this process already resigned to just take whoever seems best out of what is a very, very small sample size of human beings.

When it comes down to it, Facebook friends I'll never speak to in person again and Bachelor/ettes can choose to get married for whatever reason they want. I just hope that they're doing it for the "right reasons" for them, and not because they feel external pressure, which only gets stronger when they go on a dating show that promises a Neil Lane ring if you do it "right."