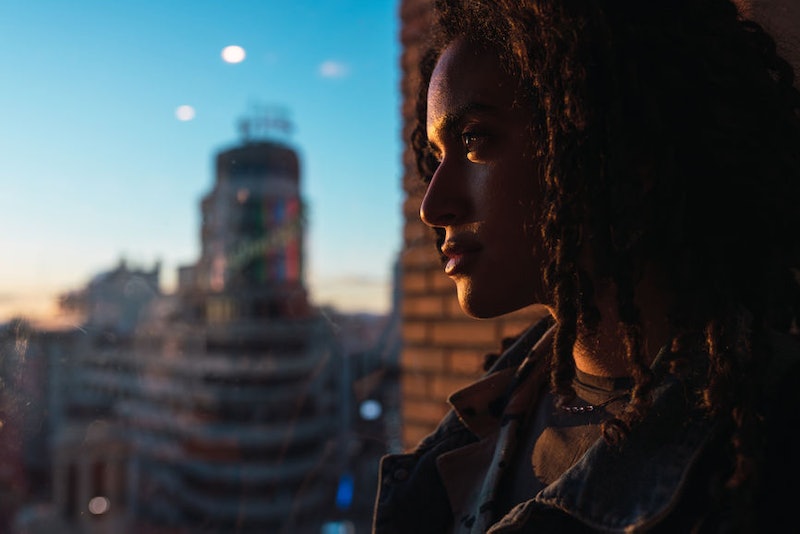 ADDICTIVE CREATIVES/Stocksy
By Suzannah Weiss
May 24, 2016

When you picture depression, you might picture somebody laying in bed, too sad to get up. But while that might be one symptom for some people with depression, it can look and feel very different for each individual. That's what the Twitter hashtag "My Depression Looks Like" is showing: Depression doesn't always match the stereotypes we hear about in news articles or see on TV. It also has many lesser-known symptoms, and for many, it looks like nothing at all because they're not allowed to show it.

According to a 2013 Centers for Disease Control and Prevention report, 10.7 percent of adult women and 7.7 percent of men experience depression. The umbrella term "depression" encompasses a number of psychological conditions, according to the National Institute of Mental Health; it can include persistent depressive disorder (symptoms of depression lasting for several years), perinatal depression (depression during and after pregnancy), and seasonal affective disorder (depression during the winter). Each of these can also present themselves in a number of ways — for example, in addition to the "sad, anxious, or 'empty' mood" and lack of energy that typically characterize depression, people with depression can also experience irritability, restlessness, loss of appetite, trouble sleeping, difficulties focusing or remembering things, and physical pains like headaches and cramps.

Although not much is known about the hashtag's history, one of its earliest appearances ocurred back in January from a user known as @birdonabird with the tweet, "#mydepressionlookslike a super clean house with nothing out of place because I'm not creating anything." (@birdonabird tells Bustle that they, too, are not sure where it came from.) It may be a riff off the #MyAnxietyLooksLike hashtag, which was started in 2014 by Amanda Alcantara. #MyDepressionLooksLike has recently begun trending again, with Twitter users employing it to talk about depression's many and varied manifestations.

Along with the notion that it only occurs in one way, another misconception about depression is that you can tell when somebody's depressed. In reality, depressed people will often act the same way as people who aren't depressed because it's not socially acceptable to admit you're struggling with depression; furthermore, since people with depression are used to feeling that way, it may not even occur to them to behave differently.

In addition, people with depression are often criticized when they're open about it. "People think depression is something we can control, like we can just snap out of it," Kristin, 41, a user of the hashtag, tells Bustle via Twitter direct message. "And when we don't snap out of it, it's because we're lazy."

The inability to express when you're depressed can be an isolating experience. "There is such a stigma with depression that showing how it really makes you feel is almost looked down upon," explains Meg, 24, the author of the tweet above, via Twitter direct message. "Most of the time, it's easier to pretend nothing is wrong than to try and explain to people that you feel so empty, not because of one specific reason, but because of your depression."

Alexis, 29, who also used the hashtag, feels similarly. "I think people like me who are depressed try to be happy and put a smile on our face and people think we are 'fine' when deep down, we want to scream and cry and punch a wall," she tells Bustle via Twitter direct message. "Just because someone's sad, doesn't mean they are depressed, coin flipped... just because someone 'looks' happy doesn't mean they aren't hurting inside."

Fortunately, the hashtag is challenging these assumptions about what depression looks like, and by doing so, it's also helping people realize their own experiences with depression are more normal than they might have thought.

Images: ADDICTIVE CREATIVES/Stocksy; all tweets used with permission of their users.