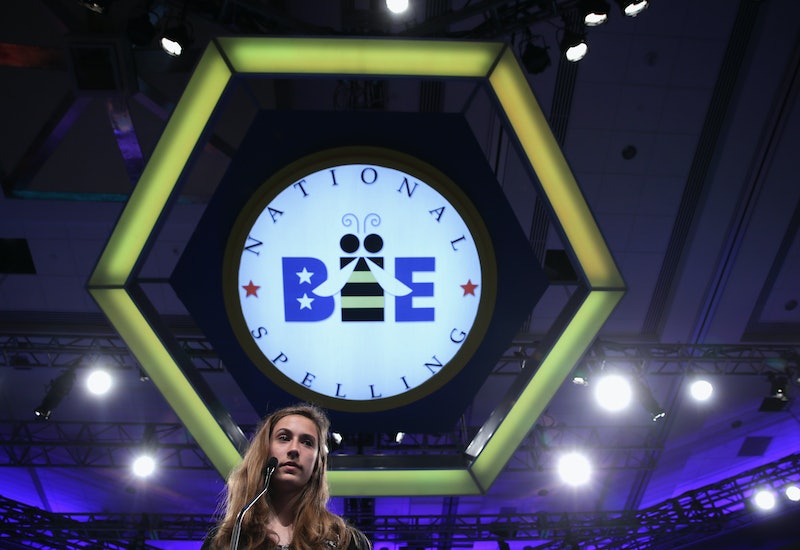 On Tuesday morning, the 89th annual Scripps National Spelling Bee kicked off with the preliminary test, which determines which spellers will compete in the finals, which will be televised on Thursday. There will be a total of three rounds to narrow down the pool of participants. According to the bee's official site, this year's competition will begin with 285 contestants from schools across the country. After spending months on end flipping through dictionaries, these kids will have the opportunity to wow the nation with their knowledge of the myriad rules and language origins that combine to form the vocabulary we use today.

Each year, the competition prompts a reminder of what we often take for granted. The English language is incredibly complex and packed with history. A student's dedication to spelling words correctly is not just dependent upon a great memory, although that is definitely a plus. Rather, it requires them to study grammar, parts of speech, prefixes, suffixes, etymologies, and sometimes even definitions. When those students step onto the stage, they bring those hidden intricacies to life.

The following factoids show that, contrary to common belief, the Spelling Bee is sure to keep you on the edge of your seat.

1) The National Spelling Bee Is Preceded By Several Others

Prior to traveling to Washington, D.C. to participate in the National Spelling Bee, students must jump through hoops that vary from state to state. Oftentimes, they participate in a series of one or two classroom bees, along with a county-wide parochial one if they attend a private school. From there, an all-school county bee is followed by the state bee, which determines who will score a ticket to D.C.

2) It's Crazy Popular On Social Media

During the week of May 25, 2015, the National Spelling Bee was tweeted about even more than Game of Thrones and The Bachelorette.

If this says anything, the 2012 final round attracted over a million television viewers. On top of that, the Maryland Ballroom at the Gaylord National Resort & Convention Center, where the bee is actually held, is over 31,000 square feet.

The first-place champion wins $40,000 from Scripps, a $2,500 savings bond from Merriam-Webster, and a 1768 Encyclopædia Britannica Replica Set Deluxe Edition, among other prizes.

The first National Spelling Bee was held in 1925, after nine newspapers collaborated to make what they called a "dull" subject more interesting. It had just nine contestants. The competition was taken over by the E.W. Scripps Company in 1941.

6) Contestants Can Tie For The Championship

7) It's Considered A Sport In Its Own Right

8) It's Been Televised For Decades

The Bee was first televised live by NBC in 1946, predating the births of most millennial's parents.

9) Boys And Girls Have Equally Shared The Prize

In National Spelling Bee history, there have been 48 female champions and 45 male ones.

Though students are allowed to respell words, they could be disqualified for spelling it differently than they did the first time.

11) Some French Words Are Used

Each speller has two minutes at the microphone. A traffic light indicates roughly how much time remains.

13) This Year's Bee Might Be Harder Than Last Year's

In the past, bee officials resorted to using a list of 25 extra-difficult words when there were just two or three contestants remaining. Now, they have increased that list to 75 words. Organizers explained their reasoning to NBC News:

We recognize the advanced skill of our competitors and have changed our rules to raise the bar even higher.

14) A Six-Year-Old Is Competing This Year

Akash Vukoti is a first-grader from San Angelo, Texas. At such a young age, he's already guest-starred on the NBC show Little Big Shots.

15) The Majority Of Students Are Eighth-Graders

Since eighth grade is the cutoff for the National Spelling Bee, this year will be the last shot at victory for 126 of the 285 contestants.

16) Some Are Continuing A Legacy

Of the 285 spellers, 29 have relatives who have competed in the Bee before.

17) Many Have Been There Before

About 70 spellers this year have competed in past bees. For Zander Reed, in particular, it's a fourth chance.

18) Officials Can Choose From Thousands Of Words

There are an astonishing 472,000 words in Webster's Third New International Dictionary, the Bee's official dictionary.

No one, including E.W. Scripps Company, knows. For now, it will have to remain a mystery.

20) Most Contestant Have Good Luck Rituals

Whether it's acting as if they're writing the word on their hand or tapping their foot, each speller has a unique spelling process.

21) One Of The Officials Is Famous