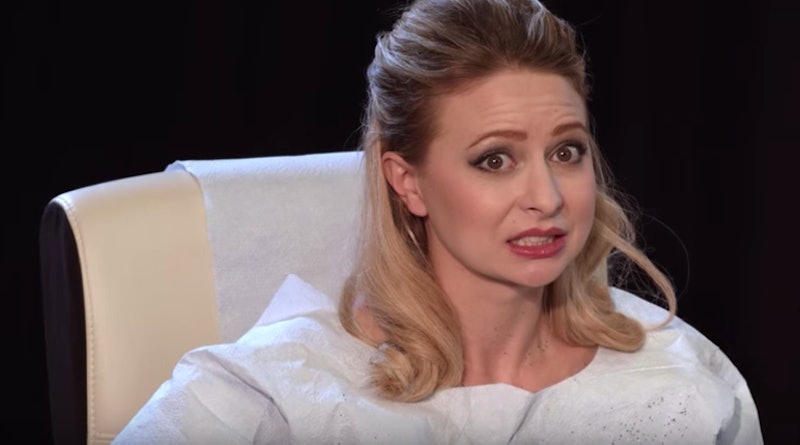 Birth control sucks, and I know I'm not the only one who feels this way, because I have this same conversation with my fellow uterus-having friends all the time. Clearly, so does comedian Honora Talbott, whose new sketch shows what it would be like if birth control options were like boyfriends. Bless you, Honora. You are doing the important work, truly.

OK, so maybe it isn't birth control itself that sucks (although it can certainly have some unfortunate side effects); perhaps more accurately, trying to find a birth control option that actually works for you sucks. Yes, obviously unintended pregnancy sucks more, but as someone who has spent literally almost a decade trying to find a birth control method that doesn't send me into a serious depressive spiral (the pill), take away my libido (the pill and the NuvaRing), or make my cramps unbearable (copper IUD), I've just about had it.

But hey, at least we have "If Birth Control Were Your Boyfriend" to help us throug it. Not only did Talbott write and direct the video, she also stars in it as OBGY-Jen, the very perky host of Contraception Connection. What is Contraception Connection, you ask? It's everyone's least favorite (thankfully fictional) dating game starring The Pill, The Copper IUD, The NuvaRing, The Diaphragm, and one very unlucky lady, aka all of us people who need birth control.

While the overall premise of the sketch is hilarious and so on point (including a Plan B bonus round featuring The Pull Out Method, who is "zero to 100 percent [effective in preventing pregnancy] depending on how dope your boyfriend's dick is," and yes, I did a spit take, too), it also makes a great point:

Mmmmhmmm. That is a very good question. Why does this whole responsibility thing feel deeply, unfairly one sided, even though it takes two of us to, y'know, make a baby? Actually, to be honest, I can answer my own question: The systematic, sexist, toxic double standard that celebrates sexually active men and shames sexually active women means a whole big percentage of the population sees this one-sided responsibility thing as good and moral and just. Straight up.

Yes, there is the injectable birth control Vasalgel that's currently being developed for men, but I suspect that an awful lot of straight, cisgender dudes are not going to be willing to get a shot in the ball sack. Even though people with uteruses who like to sleep with people with penises routinely get to either ingest something or shove something up their nether regions in the name of none of the participants in a sexual encounter involving penises and vaginas unintentionally becoming parents. There is a huge amount of unfairness and inequality going on here.

Anyway, let's meet our contestants! Uterus-havers, these are literally your only options! Dudes, you can just tune out because somehow this whole "preventing pregnancy" thing seems to just not really be on you at all!

Ah, the pill, which has sent me into a deeply depressive spiral that's incredibly difficult to crawl out of every single time I've tried it, despite working my way through a variety of different brands and hormone dosages. And I'm definitely not the only woman who has struggled with these side effects; in fact, in a 2013 study by the CDC showed that a third of women surveyed had tried five or more types of birth control dosages and over 50 percent had discontinued at least one form of birth control because of side effects. And yet, many pharmaceutical companies have shut down their contraception development programs.

Basically, oral contraception is a pill that contains either estrogen, or a combination of estrogen and progestin (both of which are hormones). The pill prevents our ovaries from releasing eggs, and makes cervical mucus thicker, making it much more difficult for sperm to reach the eggs. Taking it every day at the same time makes the pill most effective, so this is also not the method for the busy or the absent-minded.

IUD stands for "intrauterine device," and it's pretty much exactly what it sounds like: An insertable T-shaped device that provides long-term birth control just, like, on its own (up to 10 years), which is rad. A copper IUD doesn't crowd your body with additional estrogen hormones, which is also rad. Because of these two elements, this is the birth control option most of my friends have decided to go with. The downsides? It might cause increased bleeding and cramps every month. Which, for me personally (maybe not for you, but for me), means that I would essentially be housebound.

Um, OK, the diaphragm. It is a shallow, silicone cup that you insert into your vagina ( Bedsider describes it as "Meg Griffin's hat on Family Guy," and like, yeah). It covers your cervix, blocking sperm. Sound unappealing? It has to be used with spermacide to truly be considered effective. There, I just made it worse.

Diaphragms have actually been around for a pretty hefty amount of time — their precurser was invented in the 1800s, and Margaret Sanger brought them to the United States in 1916 — but they fell out of favor during the '60s with the advent of hormonal birth control. There's been a move to bring them back in recent years, though, so do with that what you will.

NuvaRing is a flexible, plastic ring that you insert every month (and by you, I mean you yourself do it at home). It's usually prescribed to women who react badly to estrogen and progestin, the two hormones used in most birth control, for two reasons: The dose is lower, and the NuvaRing also doesn't circulate them throughout your entire body like the pill does.

Check out the full video below. That final question makes even more sense after all that, doesn't it?