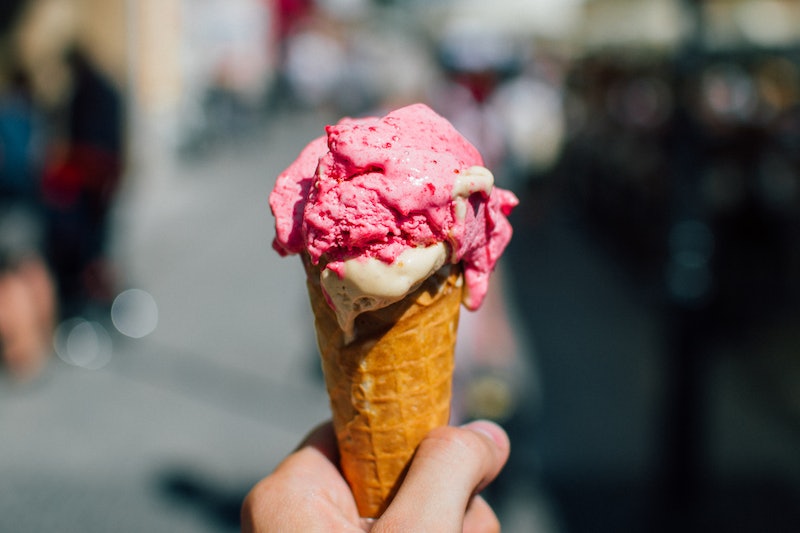 And the hunt for the elusive hangover cure continues. The latest idea comes from manufacturers in South Korea, and their solution to the pounding heads, brain fog, and queasy stomachs that follow one-too-many strawberry daiquiris actually sounds pretty interesting: It's a hangover cure ice cream bar. The big question, of course, is whether it will work; after all, most research has concluded that there's no such thing as a hangover cure. We do know that some things are better to eat after overindulging than others, though, so let's take a look at what the science says about this ice cream treat.

First, the details: A convenience store chain in Seoul will introduce the “Gyeondyo-bar” on Friday. The translation of the bar's name means “hang in there” in English; the goal, of course, is to help people recover from an overenthusiastic night. Although this is the first ice cream that’s specifically geared towards easing the negative symptoms of excess alcohol consumption, Reuters reports that hangover remedies generate around $126 million in annual sales in South Korea.

One of those remedies is a hangover drink called “Hut-gae Condition,” which has been sold in China, Japan, and Vietnam since 2014. It was also famously featured in a music video by Snoop Dog and Korean pop star Psy, aptly called “Hangover.”

Other post-drinking remedies popular in South Korea include skin creams for women, which promise to restore softness after a night on the tiles, as well as a whole load of supplements available in shops. There’s even a popular pork-based hangover soup that’s served around the country.

For the curious, here's what the ice cream bar in question looks like:

So, what's the key ingredient in all these products, and more importantly, do they actually work? The answer lies in a plant extract: According to Reuters, many of the popular hangover remedies (including the ice cream bar) include raisin tree fruit juice (Hovenia dulcis). Use of this extract to relieve hangovers apparently dates back to the 17th century, with a medicine book from that era detailing its usage as such. The question then becomes, of course, whether or not science has proven the ingredient to alleviate hangovers — so I did a little digging to see what I could find.

In 2012, a study published the Journal of Neuroscience found that oriental raisin tree extract reduced symptoms of alcohol intoxication in rats. Pharmacist Jing Liang, one of the researchers from UCLA who lead the study team, told New Scientist at the time that he was confident the component of the raisin tree extract (DHM) will also help humans get drunk less and alleviate hangover symptoms, after seeing the same effect in his rat experiments. “DHM will reduce the degree of drunkenness for the amount of alcohol drunk and will definitely reduce the hangover symptoms. ... In time, it will reduce their desire for alcohol,” he said.

This is pretty amazing, and considering the hugely detrimental effect alcohol consumption has on global health — the World Health Organization estimates that 3.3 million deaths occur each year which are alcohol abuse related — more studies into the effects of raisin tree extract are definitely needed. If the extract can combat hangovers, could it also help combat alcoholism? It's an interesting question, and one that could have wide-reaching implications.

However, this latest addition to the Korean hangover-cure-crew contains a pretty minuscule amount of raisin tree extract — 0.7 percent, in fact — so it’s really hard to gauge whether or not the product is just a pretty clever marketing ploy, or whether it actually works.

Obviously the best way to avoid a hangover is to take it easy in the first place, but when it comes to the best and worst foods to eat for a hangover, there are a few rules to follow: Although sciene says you shouldn't opt for orange juice on a hangover because it's a stomach irritant (just like alcohol), the good news is that a high protein breakfast is supposed to sort you right out. Or, you could switch up your beverage of choice beforehand; some research states that light-coloured alcohol contains lower levels of congeners, which are harmful by-products of alcohol fermentation. An ounce of prevention is worth a pound of cure, right?