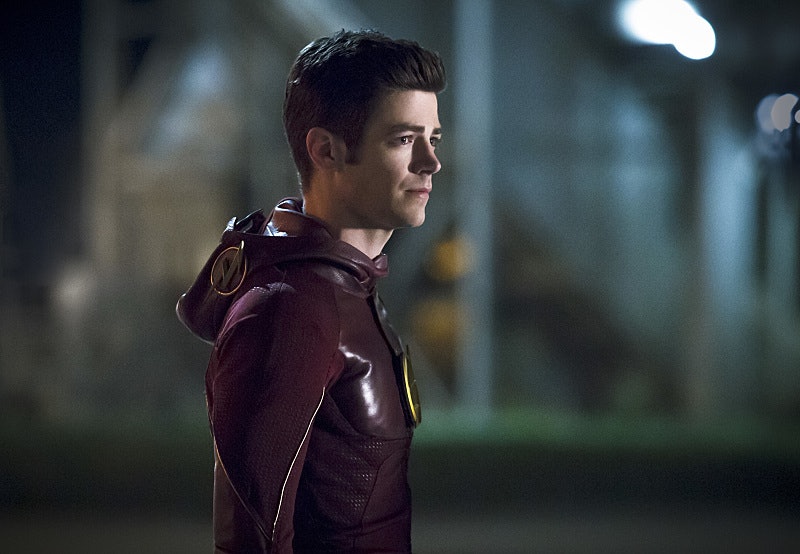 Just when I thought I was going to have all hiatus to fume over Barry giving Iris an, "It's not you, it's me" speech before ever truly getting together, he had to go and overshadow his blunder, Iris' epic declaration, and that long-awaited WestAllen kiss by doing something totally and completely insane. When Iris gave her blessing to Barry for him to do "whatever he needed to do" and explained that she'd wait for him regardless of what that was and where it took him, I don't think she ever anticipated this. And by "this," I mean Barry saving his mom in The Flash season finale, going back in time to defeat Reverse-Flash before he could kill Nora Allen. And in the process, Barry changed the entire past, effectively altering his whole life and the timeline we know from the past two seasons of the series.

Let's just sit down, take a second, and do some breathing exercises before we all blow a gasket. Because, guys I am not going to lie, I am seething over the fact that Barry went against pretty much everything he was supposed to have learned this season. Lessons such as undoing the closure he found over his mother's death, finally accepting that he couldn't control the universe, and understanding that alterations to the timeline always, always, always means disastrous consequences. You know, all those very important things. This last minute, grief-stricken decision is a total character regression for Barry, and will have a huge impact on The Flash's overall story.

In episode 21, the Speed Force helped Barry to accept Nora's death. He learned that with that tragedy also came the immense amount of good he has (or had) in his life. Namely, his relationship with Joe, becoming The Flash, finding friendship with Team Flash, and his love for Iris. All of those things were set in motion by his mother dying. So, with Nora now alive, doesn't that mean that his life took a vastly different course? What does Barry Allen's life look like now that he did, technically, grow up with his parents, instead of the Wests?

There's only one thing for certain as we ponder that question going into Season 3 — while Barry may remember who he was without Nora, his life will be inexplicably different because no one else will. Forget romance, will he and Iris still be friends? Will he still be The Flash? Will he have an occupation that doesn't involve forensic science? And, what does this mean for the others? Where will Cisco, Caitlin, and Wells be? Will Eddie, Ronnie, and Henry still be alive? Will Joe and Wally still know one another? While Earth-2 may have seemed like a bizarro Flash universe, Barry's newly altered timeline may be even more perplexing. Will he end up letting Nora die once again to rectify this next season? I suppose we'll have to wait and see.