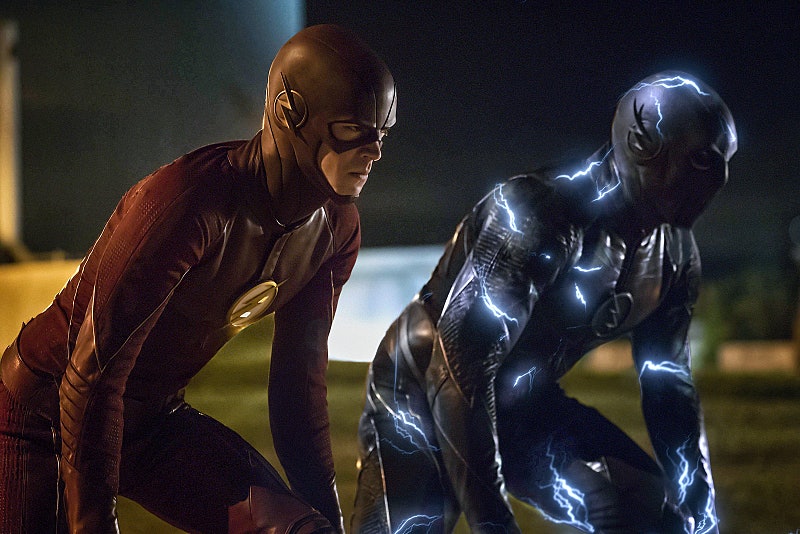 If Season 1 is any indication, then I have a sneaking suspicion that The Flash Season 2 finale is going to unveil an epic cliffhanger that will leave us begging for more. Unfortunately, however, it's going to take some time for that plea to be answered thanks to a little thing called summer hiatus. That's right, my friends — like it or not we still have months to go before The Flash Season 3 premieres in the fall. No official date has been announced, but The CW recently revealed its 2016 fall schedule, which confirms that our beloved speedster will be taking up residence in its usual Tuesday night 8 p.m. time slot. But that means we still have a solid four-plus months ahead of us without our Central City gang. (I can already feel the withdrawal symptoms kicking in.)

On the plus side, though, it's looking more and more like The Flash's third installment will be well worth the wait and provide answers to a few highly anticipated questions, including the oh-so mysterious background of Miss Caitlin Snow. In fact, during a recent interview with Collider, executive producer Andrew Kreisberg hinted that Season 3 could very well be when we're finally introduced to Caitlin's mother. "We haven’t met Caitlin’s mother yet," he told the outlet. "We got a little talk between the two women, which will probably play out in Season 3."

Kreisberg is referring, of course, to when Caitlin and Killer Frost came face-to-face in Zoom's lair a few weeks back and described their mother (on both Earths) in a not-so flattering way. Aside from this brief mention, though, we know almost nothing about Caitlin's family or her past, so it'll be interesting to see how all of that plays out. It's also worth noting that Killer Frost made mention of having a brother, which means it's entirely possible that Caitlin may discover a long-lost sibling at some point during next season. And, of course, there's always the possibility that she herself will journey down the Killer Frost path. I mean, she's certainly experienced enough loss to be tempted to give into her darker urges.

But that by far isn't the only thing fans have to look forward to upon the show's return. In light of Supergirl switching over to The CW, the network has also announced a major four-way crossover for next season between Arrow, The Flash, Supergirl, and DC's Legends of Tomorrow. "Next season, Arrow, The Flash, Legends of Tomorrow, and now Supergirl will join forces in our annual crossover event, our biggest ever," CW head Mark Pedowitz announced during CW Upfronts. And though I know this probably goes without saying, but this is a big deal, you guys.

I mean, we're talking about four separate superhero shows coming together for an epic crossover event. I can't even begin to express my excitement over al of this and the inevitable amazing friendships that will bloom because of it. (Kara and Felicity are totally going to become BFFs, right?)

Suffice to say, if you weren't already pumped for Season 3 of The Flash, then rest assured you are now. Let's just hope that this pesky little hiatus problem will go by as fast as our red speedster. (Please?)