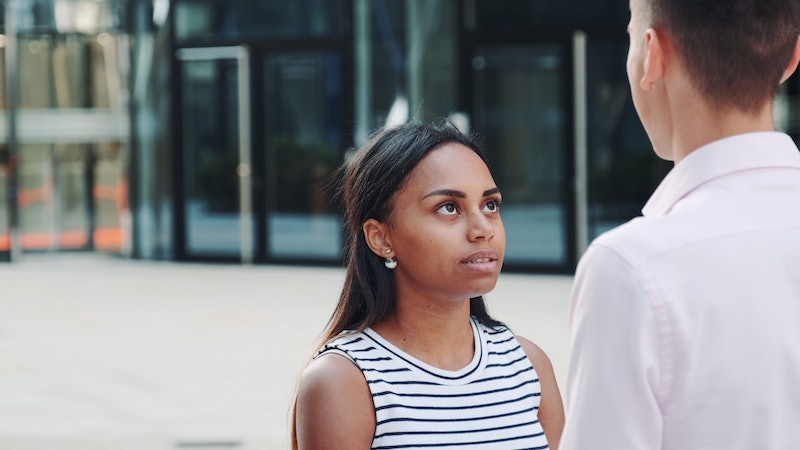 The way that we have arguments with our significant others has been the subject of a lot of scientific interest in the last 30 years, as psychologists have begun to realize that conflicts within relationships aren't necessarily negative things; those conflicts (and the ways that we resolve them) can indicate a lot about the health of a relationship and whether it might survive into the future. Right now, a lot of the work in this field has only focused on heterosexual couples in marriage situations, but the research is still developing; and as it develops, we're gradually expanding what we know about what a "good" argument looks like, and what habits or techniques couple who aims to "argue well" should try to adopt or avoid.

Arguments — as anybody who's ever gotten into a 50-minute knock-down-drag-out about washing dishes will attest — are rarely concerned solely with their subject matter. They're also tests of emotional limits, expressions of anger, resentment or worry, and, as a 2013 study from Baylor University found, experiments with power: the Baylor researchers found that people prioritize their partners giving up power in arguments over getting an actual apology at the end of the argument. But despite the many variables in a relationship disagreement, there are certain behaviors that can cause trouble — and many of them are subtle, involving body language, context, vocal tone, argumentative frequency and other less obvious factors.

Here are seven traits of couples who manage to fight "well," according to science. A lot of it, as is often the case, comes down to this: don't fight badly.

1. They Have Good Attachment Behaviors

A 2011 study found that the roots of good argumentative behavior in a romantic relationship may actually be formed long before you and your partner ever got together — like, all the way back in infancy. The idea of attachment behaviors has been a part of psychological theory since the 1950s with the work of John Bowlby, and essentially argues that styles of "attachment," or intimate closeness and care from parents, can influence people's emotional styles from very early on in life. And the 2011 study, which was conducted by researchers at the University of Minnesota, found a link between attachment styles in childhood and the ability to resolve arguments with spouses as adults.

The study was focused on a cohort that had been closely followed since their birth in the '70s. In 2011, they and their partners were brought in and their argumentative styles were observed. But while researchers observed arguments from inception to completion, it was the period after an argument (the "cooling-off period", as the researchers called it) that indicated something very interesting. Some couples could instantly switch to another topic and chat happily after an argument, while others just couldn't let the problem go.

The difference, researchers found, was in their differing styles of attachment to their parents. If they'd been "insecurely attached" to their caregivers as very small children (in other words, if the parent didn't make them secure in some way, whether by rejection, absence, inconsistency or intrusion), they found it really difficult to resolve or move past arguments as adults. But the researchers also found that if one partner had been insecurely attached but the other had a secure childhood, they were likely able to work issues out eventually.

Argument resolution is a large part of effective arguing. And according to one study, resolving them face-to-face will likely lead to better outcomes than attempting to wind them up via text. This doesn't seem like a very surprising revelation, but we also can't take it entirely to heart because of the study's unusual parameters: all the participants were 18-to-25 year olds, all were in straight relationships, and a full 33 percent identified as Mormon (the study was conducted at Brigham Young University, a university owned and operated by the Church of Jesus Christ of Latter-day Saints). Not exactly a representative sample of the U.S. population, as The Atlantic pointed out when the study emerged in 2013.

But even if the findings might not apply to everybody, they're still interesting: the researchers in charge found a direct correlation between attempts to reach resolution in inter-partner disagreements via text and a feeling of unhappiness in the relationship overall. The researchers also uncovered a few more "duh" moments, like the idea that "For men, texting to hurt their partners was negatively associated with reported partner attachment, relationship satisfaction, and stability." But, oddly, social networks like Facebook didn't seem to play much of a role (though I still wouldn't recommend trying to patch up a serious relationship argument over FB Messenger).

Quantity matters in arguing as well as quality, according to psychological pointers. A 2011 study that had followed the same 2,033 people for 20 years, all of whom were married, found that conflict styles and frequency tend to persist throughout relationships over a lifetime, though they may ebb and flow slightly in response to life stresses and changes. The Ohio State University researchers found that the class of conflict frequency in a relationship, from low to high, tended not to change over the course of a 20 year relationship. This indicates something interesting about the fixity of relationship styles: if you're arguing now, you likely won't stop arguing, even if the issues in your relationship shift.

The researchers also discovered something unsurprising but depressing: if you're in a low-conflict relationship with equal decision-making power between both partners, it's much more likely to survive than a high-conflict one with elements of inequality. Low conflict was highly associated with equality, but we're not sure what's cause and what's effect there: they may argue less because there's better division of labor, or there may be equal division of labor because of less interpersonal hostility.

4. They Express Their Anger Without Defensiveness Or Whining

One of the most seminal studies of argumentative health in marriages was published in 1989, and focused on how spouses argue and what it indicated about the strength and possible longevity of their relationship. The research, published in the Journal of Consulting And Clinical Psychology, found that certain types of fights improve marriages and others degrade them, which wasn't the conventional view on conflict at the time. It turns out that certain behaviors in arguments are healthy, while others can prove seriously destructive to the relationship in general.

Good emotional arguments, according to the 1989 researchers, involved three separate components: the freedom to express anger without being interrupted or shut down, the understanding that they'd made their feelings clear to one another, and a resolution that satisfied both sides, usually via compromise.

5. They Don't Use Contempt

The same 1989 study provided a list of some of the worst behaviors to use in argument situations in a relationship, and further studies have reinforced their findings. Problematic emotional strategies include defensiveness, contempt, stonewalling (or avoiding the issue altogether by shutting down), using blaming language, creating ultimatums, refusing to compromise, and whining. None of which will be surprising to anybody who's encountered any of these behaviors in an actual argument.

But in the years since, Professor John Gottmann, one of the authors of the original study, has increasingly focused on one particular argumentative bad behavior as the death knell for marriages: contempt. Behavior that indicates total disrespect for the partner's choices and voices — like eye-rolling, dismissal or sarcasm — is, according to Gottmann, one of the highest predictors that a couple will eventually divorce. According to Psychology Today, it creates giant rifts in marriages and partnerships by implying rejection, trying to gain power over the other person, and making the other person feel belittled and hopeless — none of which bode very well.

6. The Woman Calms Down First

How this particular piece of information applies to non-heterosexual couples isn't yet clear, but a 2013 piece of psychological science discovered something interesting about "good" arguments: if the participants are one male and one female who are married to each other, their relationship is likely to be happier if the woman is able to calm down first and then redirect or untangle the argument.

Wives "cooling down" first, in the sense of lowering their heart rate, pulse and general adrenalin levels, tended to be associated with more conflict resolution and better relationship health over time than husbands making the first conciliatory move. The reason for this is faintly murky, but the study's authors think it may be because of traditional deference to women in emotional arenas, even if they're not the best emotional communicators in the individual relationship.

7. They Pay Attention To Tone Of Voice As Well As What They Say

This links back to what we've learned about contempt, stonewalling and other negative argument behaviors — it turns out that arguing people are highly sensitive to both the actual arguments being made and the tone of voice in which they're relayed. And tone of voice proved to be so important that an algorithm constructed around it by the University of California in 2015 was able to predict the end of a marriage 79 percent of the time.

The algorithm took on board two years' worth of conversations between couples in counseling, broken down into acoustic components, and lined that up with their marital status five years later. It could spot patterns of seriously negative tones and emotions without needing to know what the people involved were actually saying — and those tone patterns were so important that they alone could predict whether the couples would split or stay together. In other words (pun intended), watch your tone, as your mother always said. It may be the difference between a lasting love and one that ends up in the bin.