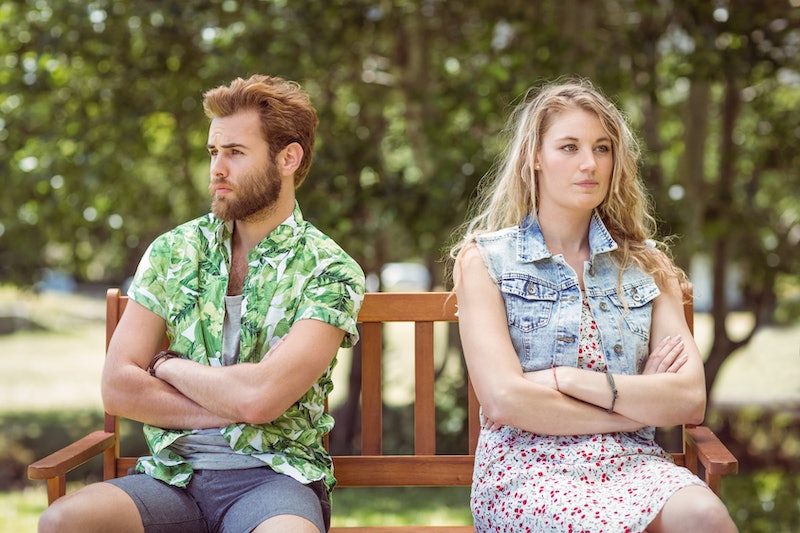 Fighting with your partner is the worst. It's uncomfortable and unsettling, and no one likes it. But even if you don't like to fight, sometimes we shoot ourselves in the foot and make arguments worse without even realizing it. Everyone can have little tiffs with their significant other and get over them in a flash. But there are other times that include yelling, screaming, and often leave you questioning the entire relationship. No one has a fight with their partner and thinks, “that was fun” at the end of it. Most of the time, you both work through it and (hopefully) get down to the bottom of what the fight was about.

To be fair, fighting isn’t necessarily a bad thing at all in a relationship. In fact, it’s quite normal and healthy. With that being said, certain fights are helpful, and certain fights most definitely are not. The consistent benefit of an argument is being able to learn from them. And of course, on the flipside, the negative of an argument is not learning from them, and making your relationship worse by continuing with unhealthy patterns. After receiving my Master’s in Psychology, working with couples in therapy, and working as a matchmaker for It’s Just Lunch Seattle, I’ve seen countless ways people can make fights with their partner worse. These unproductive ways of communicating often lead to an even bigger argument or more heated emotions.

Here are the ways you might be escalating your fights with your partner.

In the moment, we can say things that are rude, hurtful, and that we wish we could take back. However, the problem with this is that we can’t take them back. If we call our partner names or say something harsh, they may forever remember it. Your partner will likely begin to lose respect for you, because name-calling is always disrespectful. So start calling yourself out if you’re calling your loved one rude names or insulting them unnecessarily, because it is never a good thing.

One sure way to make an argument worse is by yelling. Raising your voice doesn’t just raise your vocal cords. It also raises the level of emotion in an argument. I get it — you're frustrated, and sometimes the only way to release your anger is though speaking louder. However, this is usually learned from unhealthy patterns you saw growing up. If yelling is your go-to response to most arguments, it's probably time to change these learned patterns and create healthier ones (that don’t hurt your ears). For instance, try taking a break or a walk before saying anything at all.

When you say “always” or “never” in a fight, it is usually for the dramatic effect. However, this isn’t a play or a blockbuster movie. This is real life, and by saying these words, it will just cause your partner to become more emotional or upset. Make sure you use them with caution, and only say them if you truly mean it. Don’t be the girl or boy who cried “You are always on your phone" or "You never spend time with me."

No one likes to be compared to someone else — especially not while arguing. Sometimes when you’re trying to get your point across to your partner, you might compare him or her to another relationship or person. This isn’t going to make your significant other see the light. It’s only going to make him or her see red. Make sure you are just sticking to the main characters in this discussion: you and your partner.

5. Bringing Up The Past

The past should stay in the past. The worst time to bring up something that should have been left in the dust is during an argument. Even if you’re trying to give your partner an example, make sure you are staying on topic. Bringing up how he or she “didn’t do this or that” a couple months ago is only going to cause an even bigger mess.

It’s very easy to want to shut down when you are partner aren’t seeing eye to eye. However, if you shut down, then so does the communication between you two. If you shut down, nothing is going to work. It’s fine to take a minute to regroup, but make sure you come back to fix things. You can’t instantly stop talking to someone and simply restart without any problems. It doesn’t work on a computer, and it won't work in your relationship.

The body can say it all sometimes. This is certainly true if you're having an argument with your loved one and he or she gives an eye roll. There can be so much behind a simple sigh, or crossed arms, or a shake of the head. Make sure to keep your body in check while discussing things with your significant other, and things will go a lot more smoothly.

Want more of Bustle's Sex and Relationships coverage? Check out our new podcast,I Want It That Way, which delves into the difficult and downright dirty parts of a relationship, and find more on our SoundCloud page.