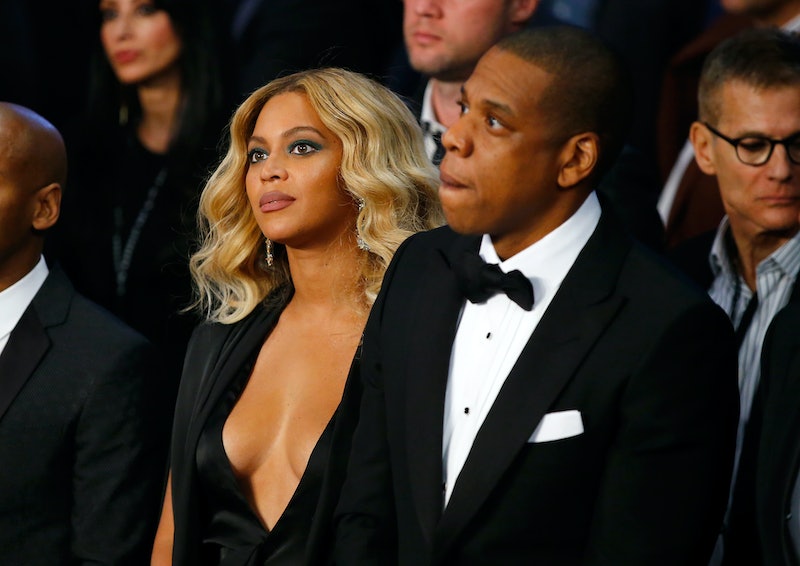 Sometimes I feel like I live my life waiting for a member of the Knowles-Carter Family to publicly respond to the drama, but, thankfully, I didn't have long to twiddle my thumbs this time around. Jay Z has responded to Beyoncé's Lemonade with a guest rap, Which is, y'know, kind of a huge deal, given that fans interpreted the entire album as a confessional from Beyoncé about her husband allegedly being unfaithful. Since Jay Z is the husband in question, Lemonade had many of us in the real world shifting around awkwardly wondering what's going on in this marriage and how much of the album to take literally. Was it a storyline manufactured by the two of them to build interest in their marriage? Or was it a peek at something more serious that's been going on behind closed doors? Will analyzing Jay Z's "All The Way Up" rap lyrics give us some clues one way or the other?

I figured that hearing from Jay Z would at least push me a little further in the correct direction of how to interpret Lemonade. And since he did a guest rap on "All The Way Up", by Fat Joe and Remy Ma, and featuring Infa-Red, Jay Z, and French Montana, this is the perfect opportunity. We get an entire verse of Jay Z, where he not only calls Lemonade out by name, but also makes some other sneaky references to his and Beyoncé's relationship. And you best believe not a single one of them sneaked by me, so let's take a look.

Jay Z starts out his guest rap with this line, which reassures us that his relationship truly is intact, but the fact that he brings it up so casually makes me wonder if it was all a ruse to make that money. It's right there in the word "worth" — "the fact your marriage made it is worth millions." It suggests a cashing in of sorts, perhaps on our desperation for something to be wrong between them, because we're so thirsty for the drama.

And speaking of thirsty, let's talk Lemonade . On the one hand, Jay Z is bragging about the success of his wife's album, but, on the other, I am still picking up hints of an inside joke, something we're not involved in. It sounds to me like Jay Z and Beyoncé found a way to make their relationship not only survive but thrive, simply by playing into all the negative energy that surrounded it. "You think I cheated? Well great, here's an album about how I cheated, and I know you'll drink it right up. Meanwhile, my happily-married wife and I will be laughing all the way to the bank."

This is a reference to an iconic shot of Tupac in a bathtub covered in gold, but I'm more interested in the use of the word "our" when it comes to Blue Ivy Carter. It would've been really easy for Jay Z to say "my baby" or "my daughter," but instead he made it very clear that he and Beyoncé are still a team, and that Blue Ivy is their first priority. Which, again, would figure into the narrative of them doing whatever it takes to provide for her future, even if that means suggesting her parents were on the outs.

Clearly there's the obvious reference not only to the Prince song "Let's Go Crazy," but to the actual fact of Prince's death, with his body being discovered in an elevator in his house. But there's yet another layer to this lyric, and I'm sure Jay Z is cognizant of that fact. Any time someone in this family references an elevator, it's impossible for your brain not to go right back to the Solange elevator incident at the 2014 Met Gala. Even though that event was highly publicized and discussed, the Knowles-Carter clan never broke ranks to discuss it, and came out of the situation even stronger.

I suspect we're supposed to draw the same conclusion from Lemonade — that's as much of their personal life as they're going to show you, and you should come to terms right now with the fact that you'll never know whether it was honest or just another facet of our image that you willed into being. If I'm on to something, it's honestly a pretty good strategy, and I can't even be mad at the deception, if there is one, because the art is so good.