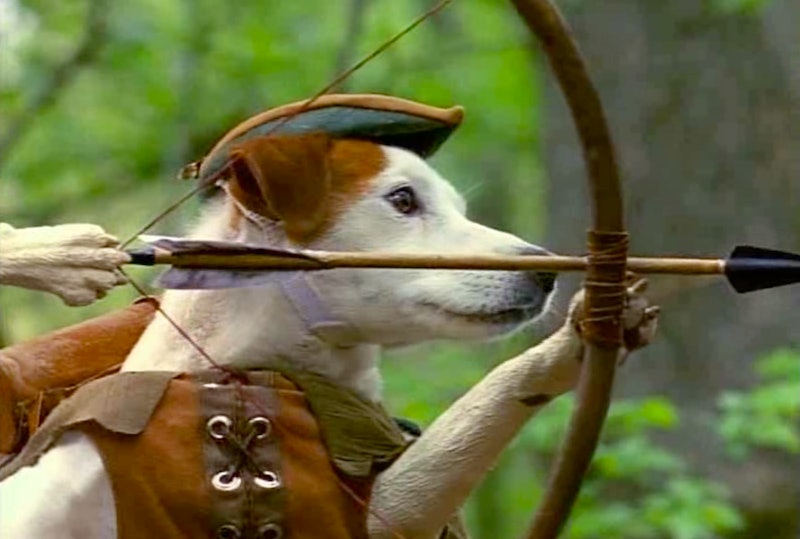 How often did you come from school, plop down on the couch, and switch the TV on to Wishbone as a child? Wishbone brought us all the best literature from a dog's-eye view, and the classic books shown in Wishbone are well-worth reading. Wishbone had everything you'd ever need: books, dogs, and plenty of adventure!

From diving into Shakespearean plays to solving Sherlock Holmes mysteries to dallying in the affairs of Jane Austen's novels, Wishbone took us into all kinds of literary worlds. The star of the story was always a handsome hero — Wishbone himself. Somehow seeing a terrier perform all the greatest roles in literature made every story instantly accessible.

Plus, Wishbone's life in the real world was not without its own epic flavor. Flanked by his owner Joe, Joe's friends, Sam and David, his crazy neighbor, Wanda, and of course, Joe's mom, Wishbone got into all sorts of shenanigans, using the lessons from literature to solve problems. Because of Wishbone, I know that literature has infinite power.

It's always fun to soak up the '90s nostalgia, and with most of Wishbone on YouTube, it's easier than ever. So, with these excellent episodes to rewatch, we can again ask ourselves: What's the story, Wishbone?

Wishbone's dive into The Odyssey brought us plenty of imagination and adventure. From his encounter with Poseidon to his crazy archery skills as he takes back his home, this episode is jam-packed with great moments. Plus, back in the real world, Wishbone, Joe, and the gang embark on a mission to save their park from being paved over for a shopping center.

2. "Paw Prints of Thieves" — The Adventures of Robin Hood

Some of the best parts of Wishbone were when Wishbone got to jump around in crazy action sequences. This episode is filled with those! Plus tons of kooky characters, from Robin Hood's gang to the stuffy lords he steals from. This one is classic Wishbone.

What's the only thing better than one adorable dog? Two adorable dogs! When Wishbone accidentally gets taken to the pound, he falls in love another dog, Rosie. But after Joe finds him and takes him home, Wishbone tries to run away to get back together with his puppy love. In this one, we see Romeo and Juliet as a play, with Wishbone in (adorable) Shakespearean garb. Sa-woon!

4. "The Entrepawneur" — The Metamorphoses by Ovid

The story of King Midas stuck with me for years after I watched this episode. Joe starts his own grocery delivery business, and Wishbone dives into this tale of King Midas and his golden touch as a cautionary tale about becoming too obsessed with money. Leave it to Wishbone to bring Ovid perfectly to life. This one even has a song.

5. "Bone of Arc" — Personal Reflections of Joan of Arc by Mark Twain

When Sam joins the boys' soccer team, Wishbone launches himself into the story of Joan of Arc. Wishbone, playing Louis de Conte, accompanies Joan to raise her army. With two great stories of badass girls standing up for themselves, how could you not fall for this episode?

Joe tries to use the revolutionary technology of... a calculator! So naturally, Wishbone takes us into a science fiction-themed adventure about using technology in new ways. As Wishbone travels through time, we learn a lot about technology and hard work. Of course, one of the most horrifying things about the future for Wishbone is that people don't read.

With Wishbone playing Sancho, we dive into the world of Don Quixote. The dramatic antics of Don Quixote are so fun, especially when paired with Wishbone's trademark snark. As he and Wishbone set out on their exploits, you'll immediately get caught up in the spirit of the classic novel.

If you ask me, Wishbone is truly at its best when it dives into mythology. This one has golden apples, gods, dragons, a greedy king, and great feats-a-plenty. Some pretty classic Wishbone moments happen in this one, and you'll get swept up in Hercules's perseverance in the face of some of his biggest (and strangest) challenges.

This two-part episode brought Joe and the gang to a creepy house in their neighborhood, complete with a black cat for Wishbone to chase. As Wishbone combines their spooky quest with the eerie tale of The Legend of Sleepy Hollow, any kid watching was sure to get the heeby jeebies.

10. Wishbone's Dog Days of the West — Heart of the West ( A Call Loan , The Reformation of Calliope , Cupid a la Carte ) by O. Henry

This movie-length episode of Wishbone is obviously a must-watch. The episode takes us into the heart of the Wild West, with Wishbone playing Long Bill Riley as he teams up with Tom Merwin to stop a bad guy named Calliope Catesby. Meanwhile, Wanda gets caught in the crossfire of the media, creating a scandal back in the real world. This one is fueled by the power of friendship.