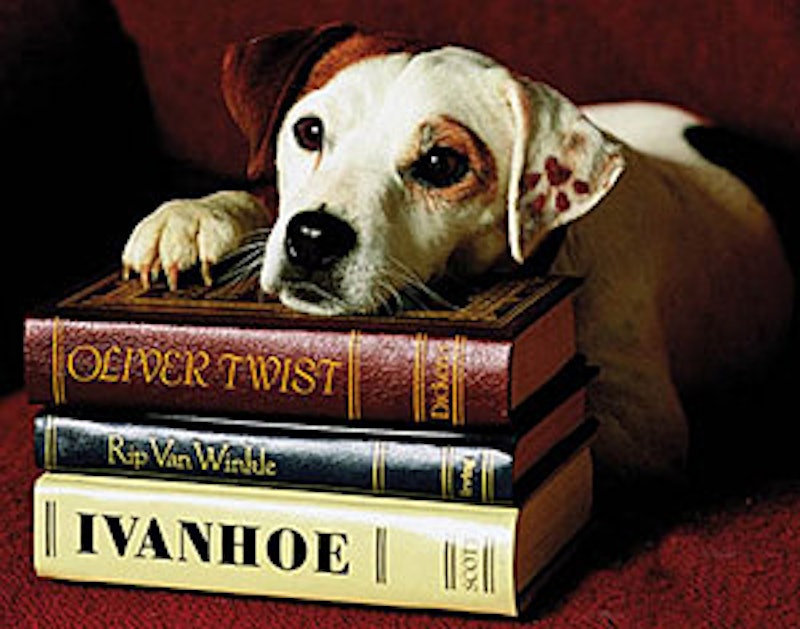 If you were a '90s kid with any sort of television hookup (because, at least where I come from, PBS is part of your basic cable package), you knew Wishbone. I spent many an after-school hour with that pesky pup (his name was Soccer in real life), and I like to think that he inspired my eventual degrees in English and love of books. Wishbone introduced a lot of children to books that they wouldn’t normally read in school (unless your fifth-grade class was reading The Cask of Amontillado, in which case, my bad). When I got older and actually read the works that Wishbone covered, I began to wonder — how accurate were the Wishbone adaptations of classic novels?

For those of you who did outdoor things after school (not me) or are too young to remember who Wishbone is, let me refresh your memory. Wishbone is a PBS show that ran from 1995 to 1999, and it followed the adventures of Joe and his darling Jack Russell Terrier, Wishbone. Joe and his friends got into everyday (and some dicey) situations that would very closely resemble the plotlines or themes of a certain novel, and you’d see that work acted out with Wishbone as the star. The show won four Emmy Awards, a Peabody Award, and two Television Critics Association Awards. It was praised for not cutting out or censoring the less-than-savory parts of works just to fit its young audience, so I guess you could say that yes, Wishbone did do a faithful job to the original books it was covering. Plus, look at the amazing opening sequence.

Now that we're all in the Wishbone mood, Let’s take a look at some of my favorite episodes.

A riff on C. Auguste Dupin’s “The Purloined Letter”, a short story written in the 19th century, this episode follows Joe as he tries to hide an embarrassing word puzzle he made, especially because the school bully wants to use it to humiliate him. In this episode, viewers learned that the thing you’re most looking for (especially an incriminating piece of paper) can sometimes be found right in front of your eyes.

Do you know the story of Cyrano de Bergerac? Basically, he was an ugly man who helped a very handsome man woo the woman that he loved. Except, Cyrano loved her, too. Wishbone steps in as our big-nosed hero, showing that you can’t judge a book (or a man) by its cover.

The Hound Of The Baskervilles is actually kind of a scary story (and a Sherlock Holmes tale), so I was always glad that Wishbone tackled this one. It was suspenseful but still appropriate for younger viewers.

In this Silas Marner-focused episode, Wishbone goes missing and is adopted (temporarily) by a kind, older man who calls him spot. Joe doesn’t realize what he had (aka Wishbone) until it’s gone, just as Eppie knew she wouldn’t give up Silas in the novel.

A real swashbuckler, The Count of Monte Cristo, was done terrifically by Wishbone. The show managed to take a story full of death and revenge and pull out the main themes of the work. I actually hate this book, but love this Wishbone ep.