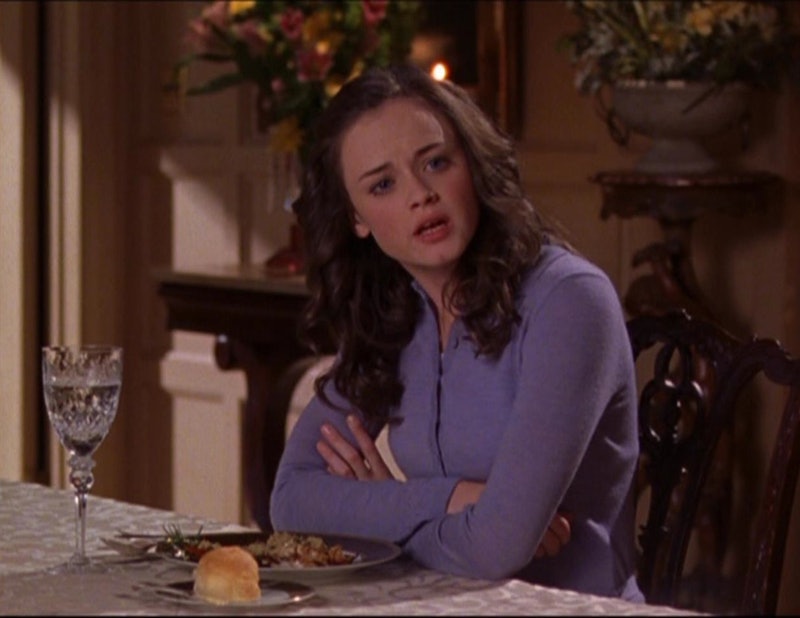 If I proposed that the one episode to cure your Rory Gilmore hate is the Season 2 episode, "Lorelai's Graduation Day," you might tell me to stop hitting the vodka so hard. And put down that rum, too. And maybe just go sleep off those "special" brownies, because, honestly, Rory's kind of the worst in this. So why is this my choice for the episode that makes it hard to hate Rory? Because Rory's never been as real as she is here.

First, let's do a rundown of her crimes here. She sweet-talks her mom into attending her community college graduation ceremony, something Lorelai is fifty shades of indifferent about, arguing "you know that deep down you really want to do this." The Rory-as-evil-genius theme continues when, after Lorelai makes it clear that she does not want her parents there, because it's something they would feel was beneath them, Rory secretly swings by their house and invites them. On the day of her mother's graduation ceremony, Rory even tells Lorelai she's going to take her out for a fancy dinner, Rory's treat, to celebrate. Then, after painstakingly setting up this Perfect Storm of high expectations, Rory proceeds to blow off school, get on a bus to New York to hunt down her forever-crush Jess, and ends up skipping her mom's graduation ceremony altogether.

There's nothing important that Rory has to do with Jess in New York – he'd phoned the day before and they'd had an awkward conversation that gives zero clues as to why Rory would hightail it to the Big Apple. When she gets there, they hang out, eat hot dogs, browse records, chew the fat a little. When Rory gets back on the bus that evening to try and make it to her mother's graduation ceremony, Jess speaks for the viewer when he says "I mean, you ditched school and everything. That's so not you. Why'd you do it?"

When Rory responds in reference to their phone call "Because you didn't say goodbye" suddenly it all makes sense. Rory's not just a goody two-shoes overachiever – she's as dominated by her hormones and emotions as any other teenager. She's just crushing really, really hard (something it's easy to sympathise with as a viewer, given that it's the exceptionally easy-on-the-eye Milo Ventimiglia playing Jess). Rory's impossibly smart, witty, hard-working and beautiful for a sixteen year old. This has to be the first time in the series the average teenager can actually relate to her.

When Lorelai confronts Rory after the graduation's over and expresses how hurt she is, Rory only builds on our affection for her. We and Lorelai know that Rory's behaviour is only this hurtful because it's so out of character for her to not be there when her mother needs her – the surprise that we and Lorelai both feel is only proof that 99% of her life, Rory's the ultimate good girl. As such, Rory's anticipation of Lorelai's punishments is endearing. Rory even grounds herself: "And that's it! I'm grounded for six months, or seven, and no TV, no stereo, no reading. In fact, take all of my books away from me and lock them up."

And really, that not reading is the cruellest punishment of all to Rory Gilmore? We can't not admit it to ourselves: she's just such a good kid.

When Rory continues to concoct elaborately horrible punishments for herself, Lorelai sniffs out the truth: this isn't about Rory being bad, this is about Jess. Rory breaks down when Lorelai touches on The Jess Issue and gives one of her most emotional speeches of the series:

I am sick, I'm ill, I'm cracked. This is not who I am. If I were to write this down in my diary and I would read it, I would be like, Who is this freak? This isn't me. This isn't my diary. I wouldn't do this. I wouldn't skip school when I have finals coming up to go see a guy that isn't even my guy and end up missing my mother's graduation, which I wanted to be at so badly. That's someone else. That's someone flighty and stupid and dumb and girly. And, I mean, I missed your graduation, which is the worst thing I could have possibly done. I mean, I hurt you and I had to spend hours on a stinky bus next to a guy that was spitting into a can, just thinking about all of the minutes that were going by that I wasn't at your graduation and they were hurting you, and they should have been hurting you because it was so selfish of this person who wasn't me to do what she did.

I hate to play the relatable card again, but: right? Who hasn't done something completely awful and out of character for someone they were crushing on? And who hasn't then completely regretted it and doubted themselves because you'd never think that you'd be so "stupid and dumb."

The genius of this episode is that it manipulates us into all the feels. By giving us no clue as to why Rory takes off to New York and showing us the various trials and tribulations of Lorelai's Rory-free graduation ceremony (Lorelai's parents show up with a cameraman in tow, to the profound derision of her fellow-students), we're forced to dislike Rory pretty intensely until this final scene, when all's revealed.

Rory – like most of us – is not a bad kid, just an extremely loved up, in-denial-about-her-feelings kid. Also a huge newsflash: Rory Gilmore, despite all appearances to the contrary, is not perfect. She's got a boyfriend but is infatuated with someone else. This episode was the first episode of the show that I really, really liked Rory. And this episode made it impossible for me to ever hate Rory, no matter how bad her behaviour, because it was just a reminder that she was every bit as flawed as her viewers – and all the more human for it.