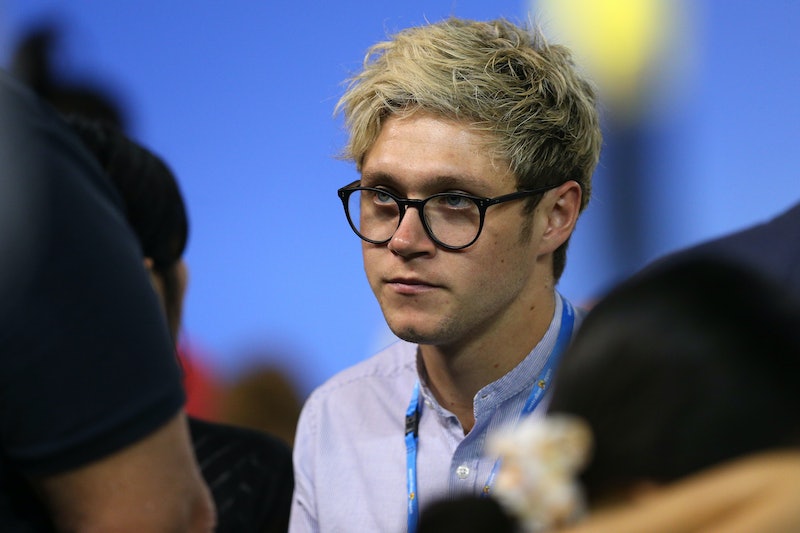 Listen up, internet trolls (aka verbally abusive human beings masquerading as fans, as if that gives you a reason to relentlessly bully your "fave"): It's time to cut the sh*t. Look at the replies after any celeb's tweet (particularly one with a fervent fan base), and you are instantly met with messages so sexually suggestive and/or painfully cruel that even taking five scalding hot showers and soaking your eyeballs in acid wouldn't be enough to erase those kinds of images from your mind. All celebrities should win awards for the self-restraint they have to impose in order to remain as level-headed as they do, TBH. So when the bullying gets bad enough that the celeb says something, you know it's serious. Such is the case when Niall Horan exposed "abusive" fans on Twitter Tuesday night.

In a series of eye-opening tweets, Horan detailed a group of so-called One Direction stans who were blowing up his phone with hateful messages about him, his family, and even the guy's young nephew. While the content of the messages is most likely some combination of awful and completely horrible, it's the idea that these fans continued to laugh at Horan while he was tweeting that makes the whole thing even more effed up. Is there any sense of awareness???

Let's talk about the idea of "fan entitlement": It's a concept that has Justin Bieber refusing to take pictures with fans, and it's one that runs rampant throughout fan bases across all genres of entertainment (music, television, film, sports, whatever). There is something (positive) to be said for die-hard fans, people who feel entitled to their opinions because they are so deep in their fandom: These fans can often offer the best and most detailed critiques of the artist's work, just because they're so intimately familiar with it and it is embedded into their very core. But feeling entitled to criticize, scrutinize, and analyze their fave's art, decisions, social media, whathaveyou — it's a sense of entitlement that is within the boundaries of being a fan. What these "fans" are doing to Niall Horan? It's harassment. It's when that sense of entitlement goes beyond the norm and crosses into "LOL I really know you on a personal level so it's OK that I trash talk you and your family, repeatedly and relentlessly, straight to your face." I won't even get into how on earth they must have managed to get his actual phone number.

The scary part is the thrill of the public acknowledgement. Niall Horan putting fans on blast should be absolutely mortifying and an enormous wakeup call, but it's not. Instead, judging by the fact that they are still laughing at him, it only furthers their purpose: They got under his skin, prompted a reaction, and now he is recognizing their presence in a very public way. It's the only way I can even attempt to see the reasoning behind why "fans" tweet and harass celebs the way they do — all fans desire to be noticed by their idol. It's why people bring signs to concerts, and why the elusive retweet from your fave is so highly coveted. And in some sick, twisted way, these fans achieved that. But is relentless verbal abuse really what you want to be acknowledged for?

As fans, we have to do better than this, because we are better than this. And if privacy-breaching, name-calling cruelty is all that you can offer your faves, then kindly exit your fandom. And remember: Don't let the door hit you on the way out.