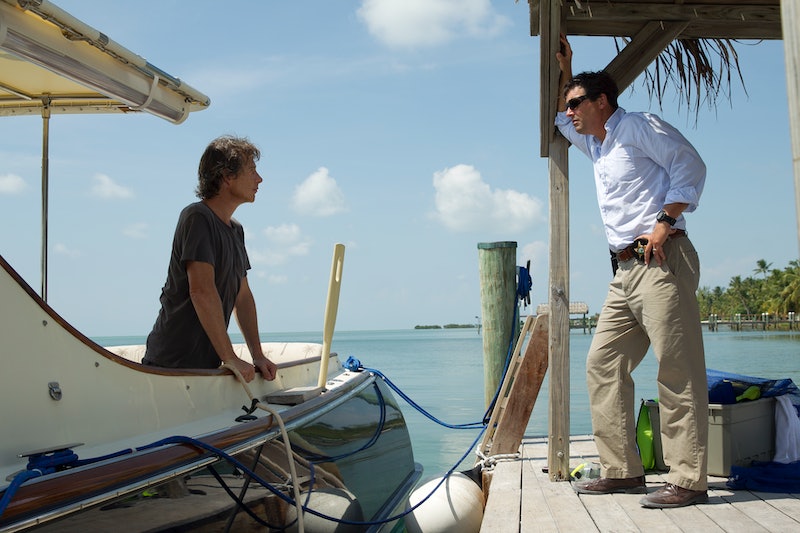 The problem with any great Netflix show is that it makes you speed through the episodes so fast that, more times than not, you end up forgetting a few key elements of the show that may be important to know in future seasons. So now that Bloodline Season 2 is about to premiere on Netflix, I thought it'd be a good idea to look back and refresh our memories on one of the most prominent aspects of the first season: Sarah Rayburn's death. This tragedy has had a serious impact on the entire Rayburn family and created a ripple effect of drama that's made this entire storyline possible. So yeah, I'd say it's a pretty important thing to remember. So how did Sarah Rayburn die in Bloodline , exactly? It all boils down to one very unfortunate drowning accident.

Thanks to the numerous flashbacks provided throughout the season, we learned that it all started when Sally Rayburn made the decision to leave her husband and run away from home. Obviously, this meant she wanted her kids out of the way in order to pack, which left 10-year-old Sarah feeling bored and somewhat neglected. This prompted Danny (the eldest brother) to take Sarah out on the boat in the hopes of cheering her up, despite John's countless warnings of how she's not supposed to go out there without an adult present.

Now let's keep in mind here that while Danny may not have technically been an adult, he was about 15 or 16 years old at the time and was only trying to do a nice thing for his sister. But even the best intentions can come with dire consequences. And, sadly, this is one of those cases.

Being the responsible rule-abiding son that he is, John opted to stay behind while Danny and Sarah ventured out into the open ocean. Everything was going fine until Sarah's seahorse necklace fell off her neck and into the water, causing her to jump in after it. And as luck would have it, the piece of jewelry didn't just fall onto the ocean floor, which would've been way easier to retrieve. No, it managed to get stuck between pieces of coral and rock, forcing Sarah to dangerously stick her hand into the tight crevice to retrieve it. And in the process, her hand got stuck and wouldn't come out.

Of course, Danny immediately did everything he could to try and free his sister once he realized what was happening, but they were unable to dislodge it in time before she ran out of air. She drowned moments later and all because of that damn seahorse necklace. Some viewers may opt to take a more cynical approach to the story, however, and question whether or not Danny was really as innocent in all of this as he appears. Was he secretly jealous of how much his sister was loved and purposefully tried to set the drowning in motion? Was he perhaps the reason the necklace fell off in the first place? Did he not try hard enough to free her hand, especially since he was conveniently able to release it later on in order to rush her back to shore?

The optimist in me wants to believe that Danny's intentions to cheer his sister up were pure and that this really was just a terrible accident of epic proportions. But considering how many secrets this family has, that may be a little too naive of me. Season 2 will undoubtedly shed more light on the situation and hopefully give us a better insight into Danny's motivations. Either way, though, this was a heartbreaking thing to happen and will probably still continue to be a dark shadow that hangs over the Rayburn clan throughout the second season and any future seasons to come.