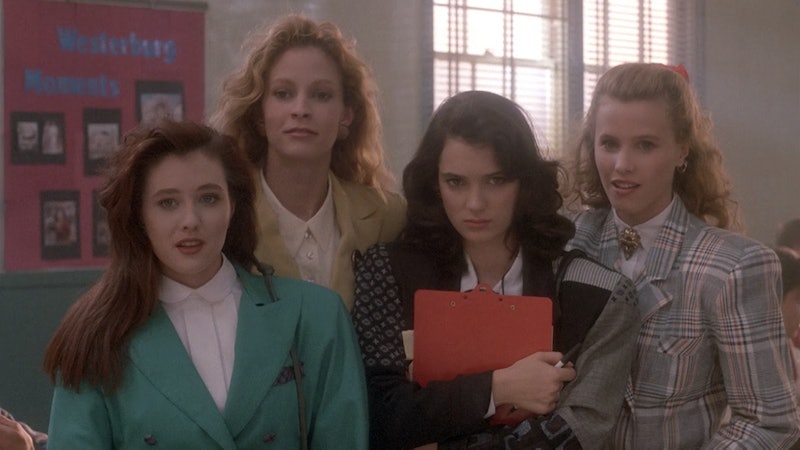 There was never a happier day in my life than the day I discovered Heathers is on Netflix. OK, it’s second to the day I found Heathers the Musical on YouTube, or maybe third to the Christmas I got Heathers. Same difference. My point is that the black-as-night comedy is one of the greatest gifts to pop culture, although it is not without heavy heaps of ridiculousness... I mean, if only from the primary-color fashion choices alone.

If you’ve never seen it, the film follows poster girl for teen angst Winona Ryder as Veronica Sawyer. Veronica is reluctantly part of the popular clique (aptly named the Heathers) and looks to dissociate from the toxic gang. She ends up going a little too far when she accidentally kills her ringleader best friend with her new sociopath boyfriend, JD. Woops. The pair make it look like a suicide, and things naturally spiral from there. Will Veronica find redemption? Will she fall into a descent of bloodshed? And what about her and JD? ARE THEY GOING TO PROM, OR TO HELL? (Spoiler alert, they don’t end up going to prom).

Let’s take a closer look at the cult classic and re-evaluate some iconic moments. Sure enough, after enough re-watches of Heathers you start to wonder, “Wow, what’s everyone’s damage?”

1. Heather McNamara Bringing On Those Strong Carrie Bradshaw Vibes With That Flower

Also taking her duties as the Vice President of the Young WASPS League Of America very seriously, it would seem.

Or does the movie open with Veronica losing a bet?

3. "She Said, 'Real Life Sucks Losers Dry. If You Want To F*ck With The Eagles, You Have To Learn To Fly." I Said, "So You Teach People How To Spread Their Wings And Fly?"

Incidentally, Heather is probably a really good teacher when it comes to flying.

Those shoulder pads really add a little something extra to her wingspan.

4. What The Hell Kind Of Handwriting Is This?

You grew up in a time when they were still teaching cursive, there's no excuse.

5. "Veronica Needs Something To Write On. Heather, Bend Over."

God, this chick could rip open Regina George's jugular with her teeth.

6. "Do They Even Have Thanksgiving In Africa?"

Found which one is the cheerleader Heather.

7. "I'd Pay Madonna A Million Bucks To Sit On My Face And Have Her Ride Like The Kentucky Derby"

For context, this is the late '80s when such a desire probs made sense.

This is more in line with today's mentality.

9. When Your Crush Is A Homicidal Maniac But His Eyebrows Are On Fleek

10. Exactly How Much Milk Do These Two Consume?

So selfish of them, really.

11. We Get That You're Literate And A Closet Intellectual, Veronica, You Don't Have To Resort To The Monocle

You're not Mr. Peanut.

12. The Fact That Veronica Isn't Concerned That The Guy Who Brought A Gun To School Found Out Her Address And Climbed Up To Her Window

13. "Now, Is This Heather The Cheerleader?" "That Would Be Heather McNamara." "Damn. I'd Be Willing To Go Half A Day For A Cheerleader."

Next time you get confused, look for the one who thinks Africa celebrates Thanksgiving.

14. "I Find It Profoundly Disturbing That We're Told Of The Tragic Destruction Of Youth, And All We Can Think To Talk About Is Adequate Mourning Times And Misused Vocabulary Words."

I find it profoundly disturbing that you're wearing a cat broach and all I can think about is the deep sadness that must plague your life.

15. I Didn't Know That Sinbad Made Mourning Apparel

17. TFW Bae Says You Secretly Wanted To Murder Your Classmates

"Haven't even had my coffee and I have to listen to this."

18. Is Veronica Just Mainlining Vodka While Writing In Her Diary?

No judgement, it's been a bit of a rough week.

19. OK, Wait, These Look Like This Was Taken The Night Before Heather Kicked The Bucket, So Unless Everyone Recycles Those Outfits On The Same Day, It Makes No Sense That This Would End Up In Her Locker

Although at least she immortalized those shoulder pads for the sake of posterity before she died.

Does she think she'll fit in with the metalheads if she goes for a half Michael Jackson, half prairie look?

"Stop murdering all of my classmates, JD, it's like, so immature."

22. Honestly, I'm Most Concerned About How JD Got A Barbie Doll

Did he just roll up to Toys 'R' Us like, "Hey, do you have any dolls I can use to threaten my ex-girlfriend into staying with me?"

23. Evidently Morbid Threads And Tripp Designed All Of Hell's Clothing

I mean, I'm a former mallgoth, so I actually think that Heather is pulling off the Beetlejuice look here.

24. A Vague Approximation Of How All My Relationships End

I would've done something better with the bangs, tho, keep 'em always wanting more.

25. "Alright, So Maybe I Am Killing Everyone In The School, Because Nobody Loves Me!"

Well, maybe people would love you if you stopped trying to kill them, or did you miss that episode of Sesame Street?

26. When Your Ex-Boyfriend Threatens To Blow Himself Up But You're Just Over It

See? Told you that you needed to give Heathers a re-watch.

More like this
Then Vs. Now Photos Of The 'Enchanted' Cast In 2007 & The Sequel's Stars In 2022
By Marina Watts
See 'Twilight' Stars Together Again For A Sweet Cullen "Family Reunion"
By Stephanie Topacio Long
Judi Dench Isn’t The Only Surprise Cameo You’ll See In Christmas Movie Spirited
By Sophie McEvoy
'The Princess Diaries 3' May Go Ahead Without Anne Hathaway
By Darshita Goyal
Get Even More From Bustle — Sign Up For The Newsletter