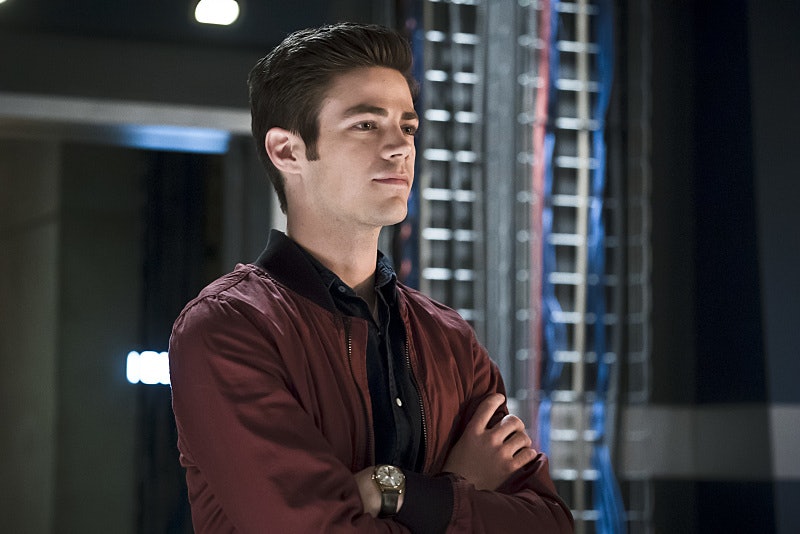 I've seen game-changing finales before, but The Flash just took it to another level. What challenges will Team Flash face now that Zoom is technically gone, but Barry made a major altercation to the timeline? What will Barry Allen be like in The Flash Season 3? According to Grant Gustin, this transition is not going to be easy.

"I don’t even know how to imagine yet what Season 3 will be like," Gustin says in an interview with Bustle at The CW’s Upfronts. "I haven’t thought about it much, because the end of Season 2 was so emotional for Barry, that I’ve kind of put it out of my mind for now. We’ll see." That choice that Barry makes to go back in time, save his mother from the Reverse-Flash, and basically (I'm guessing) erase the events of Season 1 and Season 2, is a major one. What will the world be like when Barry returns? Who will Harrison Wells be now? More importantly, how does this affect our hero?

"Barry will be in a very vulnerable place when Season 3 starts," says Gustin. We've never seen him make a choice this self-serving before. He still saved a life, so I'm not judging, but this will definitely affect Barry Allen as a character and as a superhero.

That said, one of the things I like about The Flash is that the heroes don't brood or mope. They genuinely enjoy what they do, despite the many atrocities that plague them. Could Barry's choice to put his needs over others change his generally more bright-eyed nature?

"I think one of the staples for Barry Allen is he’s optimistic and he always tries to be optimistic," says Gustin, "and he always just kind of tries to move forward with his life — and that’s what the hero represents. So I don’t think he’ll lose that, but I think he will be in a pretty… I would imagine the darkest place we’ve ever seen him, when we come back for Season 3."

In this dark and vulnerable place, I wonder if any other speedsters could step in? Neither Jesse Quick nor Wally West got their powers in the Season 2 finale, but that could change now. Plus, Barry may have created a timeline in which he isn't The Flash anymore at all. He could have competition!

Gustin, at least, doesn't think that the addition of Wally and Jesse as speedsters would generate any threats or "bad feelings" from Barry in his job as The Flash — though there would definitely be some advantages and disadvantages. "I would imagine they could potentially get in the way at times," he says. "Barry’s pretty stubborn and can get frustrated easily. But I think he likes having a team, so I think having speedsters on his side would be a good thing."

All things considered, I'm looking forward to Season 3. For such a potentially dark ending, this show has never been more full of possibility.

More like this
'The Flash' Officially Ends Its Run With A Shortened Season 9
By Brad Witter
Does 'Locke & Key’s Ending Mean There Could Be A Season 4?
By Sophia Moore
'The Simpsons' Will *Finally* Address How They “Predict The Future”
By Sam Ramsden
Netflix Just Rebooted A Classic ‘90s High School Drama
By Maxine Harrison
Get Even More From Bustle — Sign Up For The Newsletter