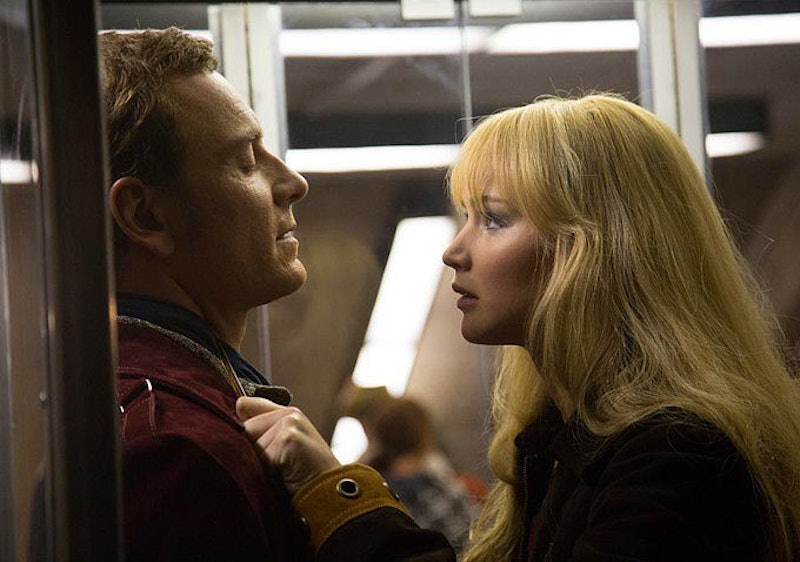 When it comes to the brand new X-Men franchise, there were a lot of strange new avenues explored in the arcs and characterizations of the beloved characters. For me, there was nothing stranger than Magneto and Mystique's romantic relationship in the X-Men movies. In a way, it makes sense, as the two have always been close allies as members of the Brotherhood of Mutants in the comics. But, in another way, ew, ew, ew. From First Class to the upcoming X-Men: Apocalypse, Magneto and Mystique have always had a complicated relationship, but it's a relationship that I hope that they don't choose to revisit in Apocalypse. While it was a great and understandable move for Mystique's character development in X-Men: First Class, not only has she grown beyond the allure of Erik Lehnsherr, but, at this point, he has the potential to hold her back.

During First Class, Mystique needed Magneto. Not even in terms of their romance, but just as a support system in her life. Despite being raised alongside Charles Xavier, and tentatively falling into a relationship with Hank McCoy, the people closest to Mystique had one big thing in common: they wanted her to hide her true self. Charles wanted her to be his docile, dutiful, protected little sister, while Hank wanted her to be "normal," just as he, too, made the effort to ignore and hide his mutation. Magneto was the first person to tell Mystique that, not only is OK for her to be herself, but that her blue-skinned, scary, gold-eyed, red-haired true form was more attractive than looking like, well, Jennifer Lawrence. When she tried to seducing him by morphing into different seductive forms, it was so important for a young Mystique to be told that the form of hers someone found most attractive was her mutant form.

But, by the time we see Magneto and Mystique in Days of Future Past, their relationship has broken down to the point that they are actively enemies. Even after Magneto shoots her with the intention of killing her — and almost succeeds — there's still an electric current of sexual tension when she confronts him about it later. This frisson between them might be enough of a spark to get Mystique and Magneto back together in Apocalypse, but I hope that it doesn't. The Mystique we saw at the end of Days of Future Past had become her own person. She was not Erik's Mystique, she was not Hank's Mystique, and she was not Charles' Mystique. In the end, she decided not to be the villain of this story, but to walk away from all the men in her life in order to write her own. Her anti-villain storyline throughout the film was, in part, driven by her rebellion against the box that Charles had kept her in her whole life, but, for the first time at the end of Days of Future Past, it felt like Mystique was truly her own person.

And that opens up worlds of opportunity for her. The Mystique of the new X-Men franchise isn't the villain that we remember from the comics or from the original trilogy of films. She's a hero, though her methods may frequently be antiheroic. This Mystique seems much less likely to ever work for Magneto, Brotherhood of Mutants or no Brotherhood of Mutants; hell, this Mystique seems like, if she were going to back to the dark side, she would be running the Brotherhood of Mutants. It was clear in Days of Future Past that Erik will always have an influence over Mystique, the same way that Charles does, because they were both two important men in her life who helped her become the person that she is today. But I think that a romantic relationship between Magneto and Mystique could only harm her development in the end.

Don't get me wrong. The reasons that brought Mystique to Magneto as an ally are wholly her own. But Erik's characterization in the films so far is that whatever lessons he may or may not have learned from his actions aren't going to affect his future. Despite accidentally crippling Charles in First Class, springing Erik from jail in Days of Future Past just makes him immediately deviate from the plan and start working his own agenda — starting with shooting Mystique. And being revealed as the true villain in Days of Future Past isn't likely to make him give up the whole Magneto thing by choice in Apocalypse.

I'm not saying that Erik can't or won't change. I hope that he will. However, his development from villain to anti-villain to hero, if that's where they choose to take the character in the future, is happening at a rate much slower than Mystique's. She's outgrown him. She's outgrown his methods, she's outgrown his occasionally harsh ideals, and she's outgrown any relationship the two might have had. Mystique could unlock the humanity left in him, but he only appeals to the darkness in her.

In the end, Mystique and Magneto might already be a closed chapter in the film franchise's history, and their relationship might already be a footnote in Mystique's cinematic background. But I do hope that, wherever the franchise takes Mystique's character next, if she does end up becoming a villain like her comic book counterpart, then she does it like she's done everything else so far: on her own terms, for her own reasons, and without Magneto.