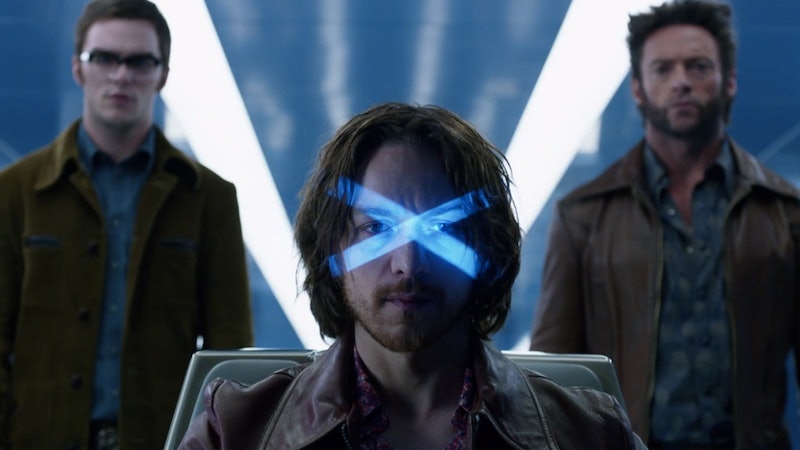 The newest film in the X-Men series is almost here. X-Men: Apocalypse takes place in the 1980s, a decade after the events of the previous X-Men film, X-Men: Days of Future Past, to pit the mutants against a new global threat in Apocalypse. All your old favorites are there: Professor X, Magneto, Mystique — sorry — Raven, and along the way they'll be picking up some new recruits like Cyclops, Jean Grey, and Storm. But what happened in the X-Men movies so far to get to this point? The answer, as provided in my X-Men recap below, is not as easy to decipher as one might think.

In many ways, the first X-Men film kicked off the modern superhero movie phenomenon. X-Men debuted in 2000. That's before Spider-Man, before The Dark Knight trilogy, and a full eight years before the Marvel Cinematic Universe kicked off with Iron Man. Since they were the first, the X-Men films kind of figured things out as they went along, never really seeming to know how long this trend would last. Because of this, the films have played it pretty fast and loose with their continuity, especially compared to the smooth cohesiveness of the MCU. Now nine movies in, it's clear that X-Men movies are here to stay, but how can anyone possibly make sense of their convoluted timeline? Allow me to do my best to try and explain what's happened so far.

Some time in the not too distant future, a team of mutant superheroes called the X-Men operate out of a school in New York. They are led by Professor X and consist of Cyclops, Jean Grey, and Storm, and they soon bring in a new recruit, Wolverine, and a new student, Rogue. They must contend with a senator who wants mutants to register with the government while also battling Magneto, a powerful mutant and former friend to Professor X. Magneto's cronies include the shapeshifting Mystique and the savage Sabretooth, and his plan to turn everyone in New York into a mutant is thwarted by the X-Men, resulting in his imprisonment.

A government scientist named William Stryker, who is revealed to have experimented on Wolverine in the past, comes up with a plan to kill all of the world's mutants by kidnapping Professor X and using his power to do so. The X-Men, along with new recruit Nightcrawler, team up with Magneto and his gang of villains to stop Stryker. They succeed, but only when Jean Grey apparently sacrifices herself by drowning in a lake.

Brett Ratner took over the reigns of the franchise from Bryan Singer, who directed the first two films, for this controversial follow-up. A cure for the mutant gene is introduced, which Magneto wants to destroy. Meanwhile, Jean Grey is revealed to be alive, but is now controlled by a dark force called the Phoenix. She kills Cyclops and Professor X, and joins forces with Magneto to attack the labratory where the mutant cure is housed. The remaining X-Men gather to stop them, using students Iceman, Kitty Pride, Rogue, and Colossus as soldiers. New characters introduced include Angel, who serves no real function to the plot, and Beast, who is revealed to be a former member of the X-Men. By the end of the film, Jean Grey is killed once again, Magneto is de-powered after being injected by the cure, and Professor X seemingly comes back to life in another person's body.

Here's where stuff starts to go off the rails continuity-wise. Wolverine's backstory includes a brother-like relationship with Sabretooth, whom he didn't know in X-Men and who is played by a different actor as a different character than previously seen. He also encounters a young Cyclops imprisoned at a Weapon X facility, which also was never alluded to before. There's also a young Emma Frost, and Gambit, who appears for no reason and is totally unrelated to Channing Tatum's upcoming Gambit film. But the film is probably most notorious for its inclusion of Deadpool as a multi-powered superweapon with his mouth stitched shut played by... Ryan Reynolds.

After the critical disasters of The Last Stand and Origins, Matthew Vaughn directed this reboot of the franchise. But instead of going full reboot, it was instead set up as a prequel, leaving its connection to the previous films up in the air. The movie takes place in the 1960s and shows the beginning of the X-Men, where Professor X and Magneto meet and become friends, forming the team together. Their members include Mystique, who is revealed to be a childhood friend of Professor X (you'd think that would have come up in one of the previous films), Beast, Havok, Darwin, and Banshee. The X-Men end up being involved in the Cuban Missile Crisis while doing battle with the villainous Sebastian Shaw, who counts Emma Frost (different than the Origins version, natch) among his cronies. By the end of the film, Magneto aligns himself on the side of evil, and Professor X ends up paralyzed.

A solo Wolverine adventure set after the events of The Last Stand, Logan struggles with the memory of Jean Grey. He goes to Japan, fights some ninjas, and loses his claws. Then he meets Professor X (who's in his own body and apparently not dead!) and Magneto (who's fully powered again!) who tell him they need his help against some dark forces.

If the timeline was confusing before, this movie blew it to smithereens. Seemingly taking place long after The Wolverine, the X-Men and Magneto are locked in a battle against robot Sentinels that they can't win. Their only hope is to go back in time to the 1970s and prevent Mystique from assassinating a U.S. Senator, which is the event that leads to the Sentinels' construction. Wolverine, who inexplicably has his claws again, is sent back where he meets the characters from X-Men: First Class. Mystique has a change of heart and doesn't kill the senator, and when Wolverine travels back to the future he sees that Cyclops and Jean are still alive. Somehow his changing the past regarding the Sentinels, which to be honest they should have been familiar with in the previous X-Men films if they were built in the '70s, also negated the events of X-Men: The Last Stand, even though some of those events (see: Professor X is alive) were already negated previously without any explanation.

Ryan Reynolds again plays Deadpool, and thanks to his fourth wall breaking ability is able to poke fun at the previous iteration of the character seen in Origins. It's kind of OK that Deadpool shirks continuity since he calls it out in the film, but the movie does feature an extended cameo from Colossus, who is a completely different character than the one seen in the older X-Men movies.

That brings us to the new film. Taking place in the 1980s (despite Professor X, Magneto, Mystique, Havok, and Beast not having aged since the '60s), the X-Men do battle against Apocalypse, who counts Magneto among his followers along with Angel (different from than The Last Stand's Angel). Mystique, who's still not a villain yet, leads the X-Men as they gain some new recruits like a young Cyclops (not the same one as in Origins), young Jean Grey, and a young Storm; plus a young Nightcrawler who, you guessed it, is not the same Nightcrawler from X-2.

There it is, the long complicated history of the X-Men movies. Does it make sense? Not even a little bit. But they're still pretty fun, right?

More like this
Twitter Is Unravelling Over Wolverine’s Return For 'Deadpool 3'
By Darshita Goyal
A New Scooby-Doo Movie Confirmed Velma Is Gay & Twitter Is Pumped
By Radhika Menon
Everything You Need To Know About ‘Black Panther: Wakanda Forever’
By Bustle Editors
Alan Rickman's Diary Reveals Why He Considered Leaving 'Harry Potter'
By Darshita Goyal
Get Even More From Bustle — Sign Up For The Newsletter