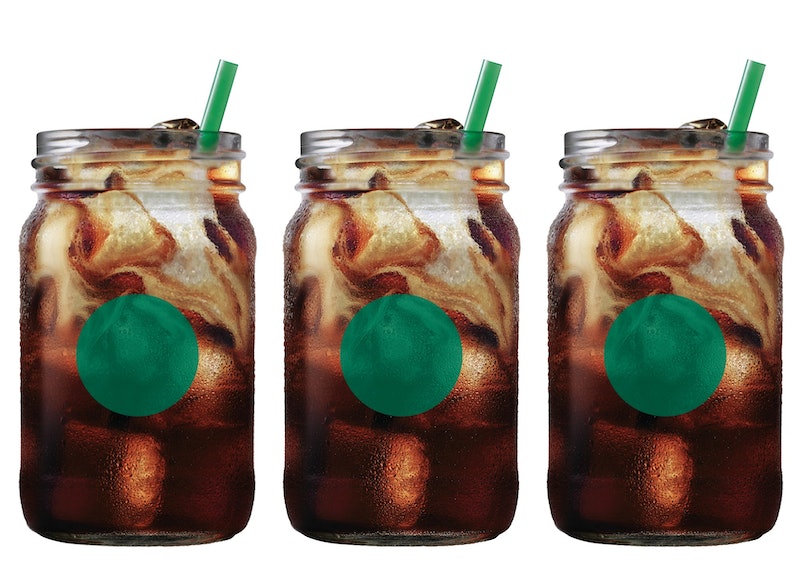 Did you really think all those spectacular Frappuccinos would be the only way Starbucks celebrated summer? Really? Be honest: I know you didn’t. And hey, I have good news: Starbucks Vanilla Sweet Cream Cold Brew has arrived, and you guys? It’s by far my favorite of the latest round of new releases — and even better, it's not a limited edition offering. Available starting May 31 (that’s today, people!) as a permanent part of the new Starbucks Cold Bar menu, it combines two of my favorite things into one glorious, caffeinated package. Everything vanilla is good. Everything coffee is good. Everybody wins.

Starbucks first began testing cold brew coffee way back in August of 2014; it then expanded to 2,800 stores in March of 2015 before becoming a permanent menu item later that summer. Made in small batches at each store every day, Starbucks Cold Brew is made by slow-steeping coffee in cool water for 20 hours. It takes a lot longer than brewing it with hot water, but the result is, as the ‘Bux describes it, “a smooth, rich, and naturally sweet… coffee with chocolate flavors and hints of citrus.” The big draw of cold brew in general is that it’s much less acidic than hot-brewed coffee typically tends to be — a major plus for coffee aficionados.

Starbucks Vanilla Sweet Cream Cold Brew takes the whole thing to a new level. The titular vanilla sweet cream was created by Starbucks specifically to complement their Cold Brew; poured across the top of the coffee as a float, the cream starts high and then drifts down low, spreading a wash of creamy, vanilla-flavored sweetness wherever it goes.

It’s caffeinated, of course — Starbucks Vanilla Sweet Cream Cold Brew has 140mg of caffeine in it — but that’s to be expected; it is cold brew, after all. A 12-ounce Tall will set you back $ $3.25 to $4.25., depending on the market, but at least that market is wide; the drink is available at all Starbucks stores in the United States and Canada from May 31 onward.

It’s not the only treat in store, either; Starbucks Nitro Cold Brew, which gets a bubbly kick from a shot of nitrogen, is also getting a release, starting at the Starbucks Reserve Roastery and Tasting Room in Seattle before extending to more than 500 Starbucks stores by the end of the summer. Both drinks are part of the Cold Bar menu, which includes all your favorite iced drinks the Starbucks menu has always had, along with these two new and exciting additions.

I don’t know about you, but it’s boiling here in DC. Pardon me while I go quench my thirst.

More like this
Starbucks Released New Menu Items For The Summer
By Emma Garza
Taco Bell Announced A Crunchwrap & Tostada Made With Cheez-Its
By Emma Garza
Is The Insta-Famous Always Pan Actually Worth It?
By Jessica Goodman
A Beginner's Guide To Drinking Whiskey
By Alexis Morillo
Get Even More From Bustle — Sign Up For The Newsletter