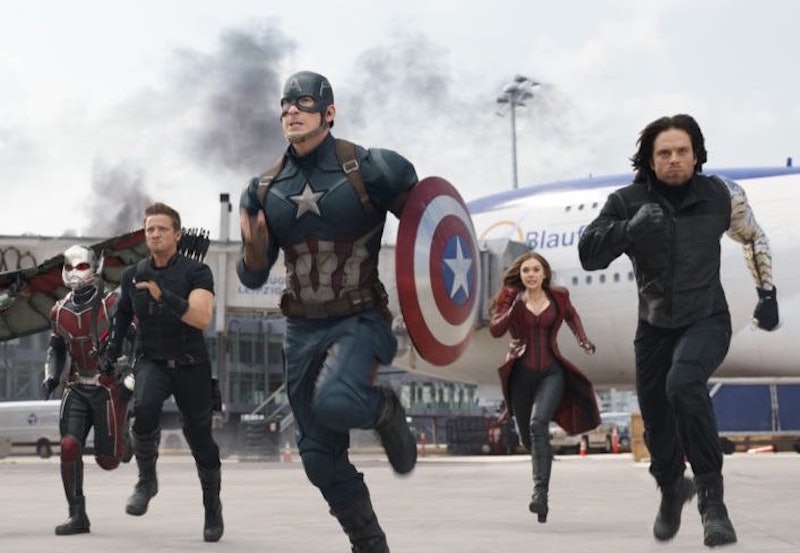 Spider-Man may have been an enemy of the World War II war hero in Captain America: Civil War, but that isn't stopping Captain America from wanting to mend the once broken Avengers. Despite the fact that Peter Parker (played by actor Tom Holland) was on Iron Man's side in the latest installment of the Marvel Cinematic Universe, Chris Evans is trying to assure that Spidey stealing his shield wasn't their only interaction. Steve Rogers has his heart set on another MCU appearance: a Captain America cameo in Spider-Man: Homecoming . When it comes to Marvel's 2017 release of Guardians of the Galaxy Vol. 2 and the web-slinging hero, well, it's pretty obvious as to where Cap fits in best.

“Guardians would be fun, wouldn’t it? [But] it’s very outer space-y. Cap’s more of an Earth-bound guy,” Evans shared in an interview with MTV, when asked what other appearances he'd like Cap to make in the future Marvel films outside his own franchise. “Maybe the next Spider-Man [films]. Those are going to be fantastic, and I think Tom [Holland]’s just a great actor, so that might be a fun one to pop up into." Considering the fact that Civil War gave Holland his very first appearance in the MCU, it would only make sense that he repay the favor for a fellow superhero.

However, the possibility of a Captain America cameo — as exciting as it may be — is also one pretty complicated situation. It all depends on whether or not these boys are able to leave their pasts behind.

At the end of Civil War, Captain America and Iron Man seem to have put their differences aside... sort of. Spider-Man — after being recruited by a smooth-talking Tony Stark — returned home to his not-so-normal life as a high schooler, and complained to his Aunt May that he'd been beaten up by a bully named Steve and his "huge" friend. That doesn't speak to a warm relationship between Cap and Spidey, even if they did bond over being from New York during their fight. With Spider-Man: Homecoming already set to provide more of a look into Parker's non-Avengers lifestyle — with a confirmed Iron Man cameo — it really wouldn't make sense for Captain America to appear. There's no real clear place for him to fit in.

But no need to fear, Team Cap! A special Iron Man and Spider-Man bond doesn't totally rule out the Captain America cameo possibilities. In fact, maybe Parker needs Rogers to set him straight, since the highly-intelligent teen may still need to learn some self-control? And, hey, I don't think Iron Man would be the best mentor. Or, perhaps, the Captain America cameo could also include moments from Marvel's Ultimate Comics Spider-Man collection. Depending, of course, on whether Kevin Feige plans on taking the fate of these characters.

All-in-all, it's not totally unreasonable for Cap to get his cameo. I mean, someone aside from Iron Man will need to teach him the ways of superhero warfare. But I guess we'll just have to wait until the July 7, 2017 release of Spider-Man: Homecoming to find out if Captain America is the one up for the job.