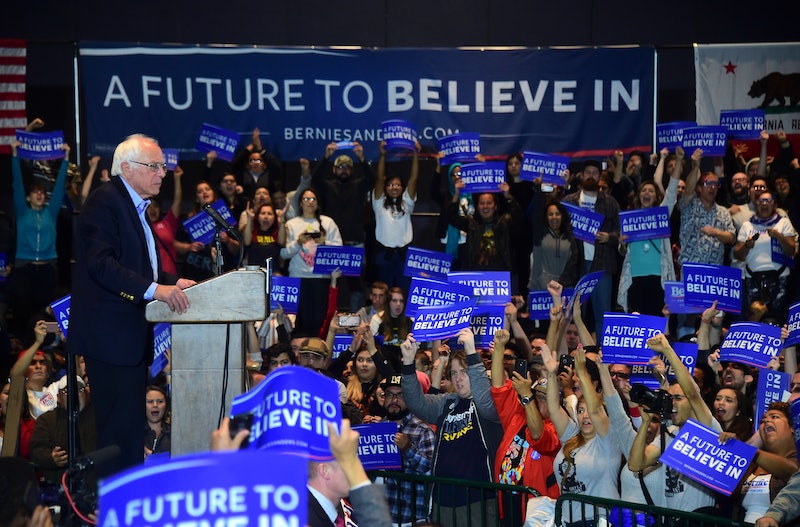 Only half of Bernie Sanders supporters say they will vote for Hillary Clinton over Donald Trump in November. Just 50 percent. You'd think the average Democrat wouldn't be caught dead considering a Trump, and yet Sanders supporters are contemplating it — either that, casting their ballot for a third-party throwaway vote, or not voting at all. The answer, according to a Washington Post piece by David Weigel, might not be that complicated. Plenty of Sanders supporters aren't and don't want to be Democrats.

One of the reasons is that the top two political parties aren't so popular these days, and it's gotten worse — even since just 2008. Back then, 57 percent viewed the Democratic Party favorably compared with 40 percent for the GOP. Now it's 45 and 37 percent respectively. Even Sanders himself seems to hold a negative view of the Dems — and he's trying to win their nomination! His campaign continues to attack the DNC chairwoman Debbie Wasserman Schultz for "throwing shade," and claims the entire primary delegate system is rigged against him. Combine that with his refusal to join the party, and it's safe to say he's not its number one fan.

But maybe he does get what's at stake — at least somewhat — about more than half the country thinking unfavorably of the party whose nomination he'd like to win. Asked Monday why he's not telling voters to register as Democrats, he responded that the question was "esoteric." Not so for anyone who cares about the Democratic Party, which sees more than 40 percent of its voters supporting the outsider. But then he also spoke some sense.

Here's what Sanders said about his voters becoming active Democrats, according to the Washington Post.

That decision is obviously up to each individual voter. When you have a whole lot of folks in this country who are not happy with the Democratic Party, even less happy with the Republican Party, and for a variety of reasons many people are registering as independents or not affiliated, those people have got to be brought in to the Democratic Party.

So he does think the Democratic Party should widen the tent, but then why not push for that within his own ranks? For a true political revolution, Berners need to do far more than elect a president. They need representatives, senators, and other political leaders on their side — and yet they keep pushing for a political revolution from the outside.

They want in on the primaries to vote for a candidate like Sanders that they think would improve the party, but they don't want to join and reform it from the county level up, some argue, like Markos Moulitsas, founder of the Daily Kos website. He said the Sanders supporters are "refusing to do the hard work of taking over a party from the inside."

To create a real political revolution, Sanders team would benefit from electing progressives up and down the ticket. A great place to do that would be from within the Democratic party.