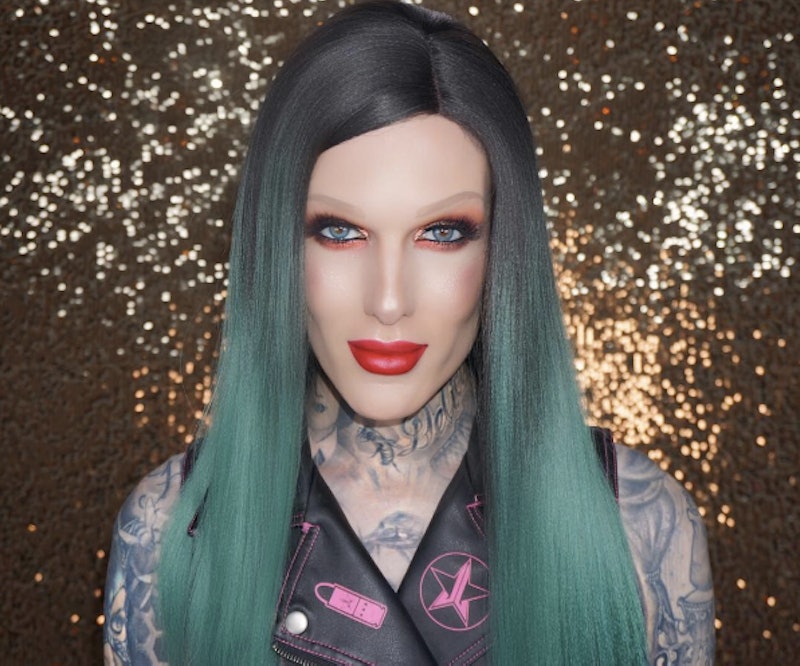 In the past couple of decades, we've witnessed both clothes and scents swapped and exchanged amongst gender identities; but makeup? Not so much (unless we're talking specifically about glam rockers). That is until now, as the latest boom of gender neutral beauty trends has arisen. In the '90s, men, women, and everyone in between had CK One hanging out on their dressers. We all put on overalls and Oxford shirts and still looked as feminine or as masculine as we wanted. But makeup continued to be deemed a female practice — one that not many men or gender nonconforming (GNC) individuals dared venture into unless they had the time or patience to defend their identities.

Of course, that is total BS. There are many different notions of beauty out there, and what it means to be masculine or feminine as per society has been whipped up by humans. There aren't any actual rules, so with a little push and a willingness to be open-minded, gender binaries can easily shift.

Marc Jacobs shared with The Cut just how fluid he feels things can be, telling the publication, "I don’t know, but I always loved that image of a girl putting toenail polish on a guy — her boyfriend, or something like that. Or a guy waking up in the morning and reaching over and putting on his girlfriend’s shirt." Those images aren't startling. They're normal and a reality for many. So let's take a look at the most recent gender neutral beauty trends popping up so that we can all grow comfortable with them. At the end of the day, people have the right to express themselves in whichever ways they choose.

When MAC announced a new unisex collection created by New York socialite brothers Harry and Peter Brant in Sept. 2015, many people became a little more open to the idea of men or GNC folks hovering around makeup kiosks.

According to Nylon, the collection carried "three of MAC’s staple items: the Brow Finisher, Cream Colour Base, and Conceal and Correct Palette." While this is a small foray into the makeup world — using products that would create a "no makeup" makeup look — it appears that a bolder collab is in the works. Refinery 29 reported, "The Brants confessed that they're working on something bigger with the brand for 2016. 'It's everything we wished existed in the market,' is all they would say." Here's hoping a bold lip will be considered a gender neutral look by 2017.

Thick, caterpillar eyebrows are no longer a solely masculine feature. With the likes of Cara Delevingne and her chic, unkempt look, more and more women have put down the tweezers and let their brows do their own thing.

Boys aren't the only ones who can experience the no-fuss lifestyle of a buzz cut. More and more women are picking up razors and enjoying the fun sartorial challenges that come with such a bold look. From models like Ruth Bell to celebs like Agyness Deyn, it's no longer such a shock to see a woman or feminine person with a close crop.

From man buns to man braids, dudes clearly have the skills to toss up their hair into styles some ladies haven't even perfected yet.

Wanting confidence in the skin you're in isn't a purely "female" thing, is it? Which makes the rise in gender neutral concealers and foundations not such a substantial surprise. Not only did MAC release a unisex line, but makeup brands like Enter Pronoun are popping up as well.

If you're wondering why men might need their own formulas, CEO Natalia Ramirez explained to women's site Beautylish, "Men have thicker skin, so thicker makeup just looks obvious and bad. I wanted textures that were transparent — so you could see the skin underneath." Beautylish also reported on the line's concealer trio, which was specifically made to veil dark stubble. Ramirez explained, “The colors are orange red-based and completely disguise the dark black and blue pigment of facial hair — it’s perfect for tattoos as well.” Now that's taking the push for male and masculine makeup seriously.

If women can enjoy a bushy, natural brow, then men or GNC peeps can try out a sculpted, corrected one. From Marc Jacobs men's brow mousse to MAC's brow finisher, there are plenty of products that can help them (and encourage them!) to achieve just that.

Eyeliner has always been enjoyed by all genders, and that trend hasn't ended yet. From Kurt Cobain to Johnny Depp, we have had many examples of men and masc folks out there since the '90s who prove that dabbing on a smoky eye won't chip away from your masculinity.

If many women want to better accent their features with subtle contouring and highlighting, then logic would follow that individuals of all gender identities might like to do the same. And it's true.

Beauty vlogger Colin Jay told Mic, "I feel that the male face shape and facial structure can be better flattered with different techniques and I want to further develop the concept and style of male makeup."

Beauty should be about feeling confident, your most beautiful, your most handsome; so why wouldn't those tools be open to all genders? Jay continued, "Men are held to a very similar standard of beauty as women, in terms of having bright under-eyes and youthful skin, clear of acne and scarring. But yet, somehow, our society has decided that only women should wear makeup." Preach.

If you're not ready to take the plunge with a full on buzz, the undercut could work just as well. While you might think this is a great baby step for women, remember that a lot of men sport long locks, too. This trend is a great way to have the best of both worlds, whereby you don't have annoying long hairs touching your neck but you can still sport a bun.

Or if you want to get fancy with your undercut, you can always try out the newest tattoo undercut trend.

Now that you are hopefully used to the idea of women and feminine people sporting crew cuts and men and masculine people dabbling in contouring, let's get serious: Makeup and beauty trends are for everyone. Just because you don't see many dudes sporting fake eyelashes doesn't mean it's off limits to them — it's just not everyone's taste.

That being said, a full face of makeup is definitely a gender neutral beauty trend. For example, Mic pointed out, "Those social stigmas certainly do persist, but haven't stopped another group of enthusiastic male beauty bloggers from putting their faces out there and embracing a glamorous makeup ethos that makes no distinction between genders." From a show-stopping red lip color to Kardashian-inspired fake eyelashes, men and masculine folks can enjoy these looks just as much as their female or feminine counterparts.

Marc Jacobs said it best when he told The Cut, "We live in a world where I see guys walking around with makeup, and girls walking around in boys’ clothes. All that matters is that you’re happy."

Who can disagree with that?