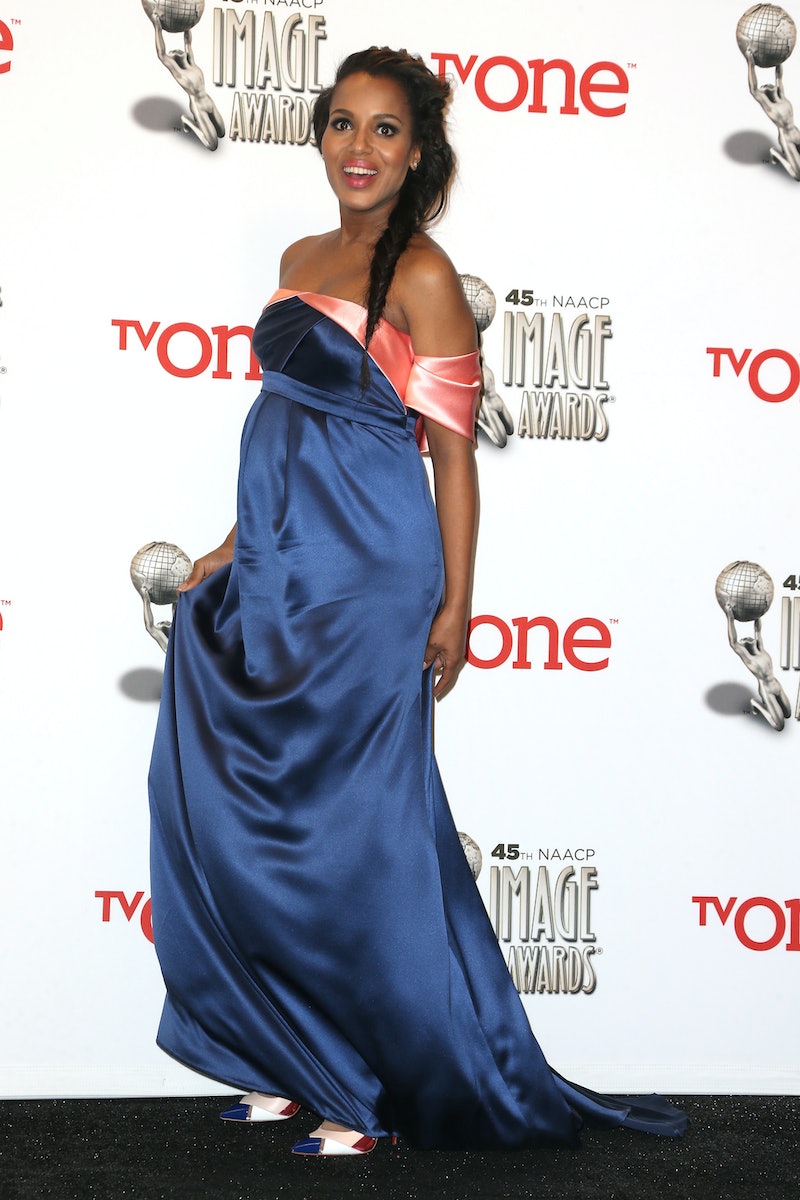 Ok, now it's official. There are baby showers, and then there are baby showers, and Scandal star Kerry Washington's baby shower falls into the latter category. Olivia Pope wouldn't have a baby shower that was anything less than perfect, so Scandal's creator, Shonda Rhimes, made sure it was flawless. Rhimes hosted the shower for seven-months-pregnant Washington at her home in L.A. for about 50 people. Jane Fonda, Tracee Ellis Ross, Cicely Tyson, Diahann Carroll, and Washington's Scandal co-star Darby Stanchfield were in attendance for the garden party-themed shower, which is just about as powerful and fabulous as it gets.

Guests at the ladies-only shower started arriving with gifts at 11 a.m. and were greeted by security guards, in true Scandal fashion. The baby's gender couldn't be determined, since the presents were wrapped in a variety of pastel colors.

Kerry arrived around 11:15 a.m. wearing a blue denim maternity dress with her mother, Valerie. The star was reportedly toasted at the soiree` with lemonade and champagne, with guests saying how generally amazing she is (oh yes, and how amazing her future son or daughter will be, too).

Fonda was so moved by the loving shower that she blogged about it, writing that Washington was so "radiant" that it made her cry. You too, Jane?

I hadn't seen Kerry since she was pregnant and as soon as I saw her with her gorgeous belly I starting crying, Fonda says. Then Kerry's mother spoke, giving words of wisdom to Kerry and the rest of us about how to raise a baby to be a happy, fully realized, person. I started crying again (and it wasn't because I wanted to go back and do my own raising of my own kids all over again with more wisdom, though that did press in on me)... it was because her words moved me.

I'm a little upset that my invite got lost in the mail, but at least there's a picture to prove that this glorious affair really did happen:

More like this
'Bachelorette' Vet Clare Crawley Unveiled 2 Special Wedding Day Accessories
By Stephanie Topacio Long
Pamela Anderson’s Dating & Marriage History Could Be Its Own TV Series
By Jake Viswanath
Meghan Trainor & Daryl Sabara Are Expecting Their Second Baby
By Jake Viswanath
Adam Levine & Behati Prinsloo Welcome Their Third Child Together
By Jake Viswanath
Get Even More From Bustle — Sign Up For The Newsletter
From hair trends to relationship advice, our daily newsletter has everything you need to sound like a person who’s on TikTok, even if you aren’t.