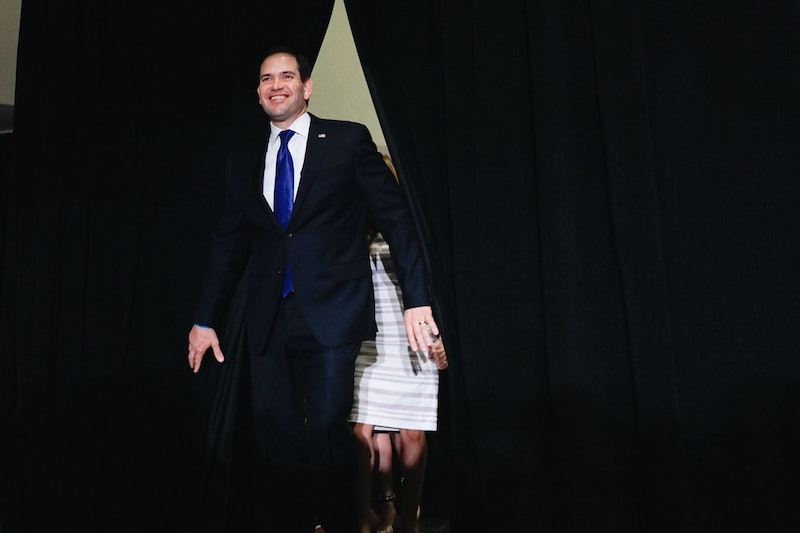 Although he once called Donald Trump a "con man," former Republican wonder boy Marco Rubio acknowledged on May 26 that he'll support the presumptive Republican nominee nonetheless. That's how strong party loyalty can be: Conservatives may find Trump narcissistic, irresponsible, offensive and not even that conservative, but anything, anything is better than someone with a "D" next to their name. Given that Trump has had the nomination locked up for almost a month now, it's as good a time as any to take a look at which of Trump's former Republican rivals have endorsed him.

In many cases, the answer is clear cut: Some former 2016 candidates have full-heartedly embraced Trump, and some have made it clear that they never will. A couple of Trump's former rivals, however, have refused to commit either way. Republicans who oppose both Trump and Hillary Clinton are in a difficult position, and many of them have attempted to walk a thin line by giving vague, non-specific answers when asked if they'll formally endorse Trump.

At the first GOP debate, every Republican candidate pledged to support the eventual nominee. That, however, was before anyone thought Trump had a realistic chance of becoming the nominee. Let's see where these former Republican presidential candidates stand on endorsing The Donald.

Months after saying that the GOP "would be split apart" if Trump won the nomination, Rubio admitted that he's going to support Trump anyway.

Although he once called Trump "a cancer on conservatism," the former Texas governor has endorsed The Donald.

Graham hasn't endorsed Trump. CNN reported that he was privately telling Republican officials to line up behind the nominee, but Graham denied this.

The former governor of New York, who did indeed run for president this cycle, said that "Trump needs to articulate a number of thoughtful positions on the issues for me to be able to endorse him."

Another 2016 candidate who made not one iota of impact on the race, the former governor of Virginia has said that he'll vote for Trump and called for the party to unify behind him.

The retired neurosurgeon endorsed Trump and has since become an emissary for the campaign.

Fiorina, who was Ted Cruz's running mate for about ten seconds in May, has since said that she'll do everything "to make sure that Hillary Clinton is not our next president" — but she refuses to speak Trump's name and has not officially endorsed him.

The winner of the 2008 Iowa caucuses says that he's "all in" for Trump and has officially endorsed him.

"I've always said I'll endorse the nominee," Paul said after Trump locked up the nomination in May. However, the Kentucky senator has not yet endorsed the nominee.

The Wisconsin governor hasn't technically endorsed Trump, but he did say that Trump "is clearly better than Hillary Clinton," which is basically an endorsement.

Although Trump is confident that the former Florida governor will eventually endorse him, Bush has written an entire Facebook post outlining the reasons why this will never happen.

The former governor of Louisiana has endorsed Trump, even though he once called him "a narcissist" who's "full of foolishness and nonsense."

Cruz hasn't endorsed Trump, and does not appear likely to do so anytime soon.

The 2012 runner-up and 2016 not-even-close-to-runner-up endorsed Trump earlier this week.

The governor of Ohio says it will be "really hard" to endorse Trump unless he sees "a fundamental change" in The Donald's "values."

So much for party unity, seeing as how a number of these former Republican presidential candidates do not, and likely will not, support Trump.