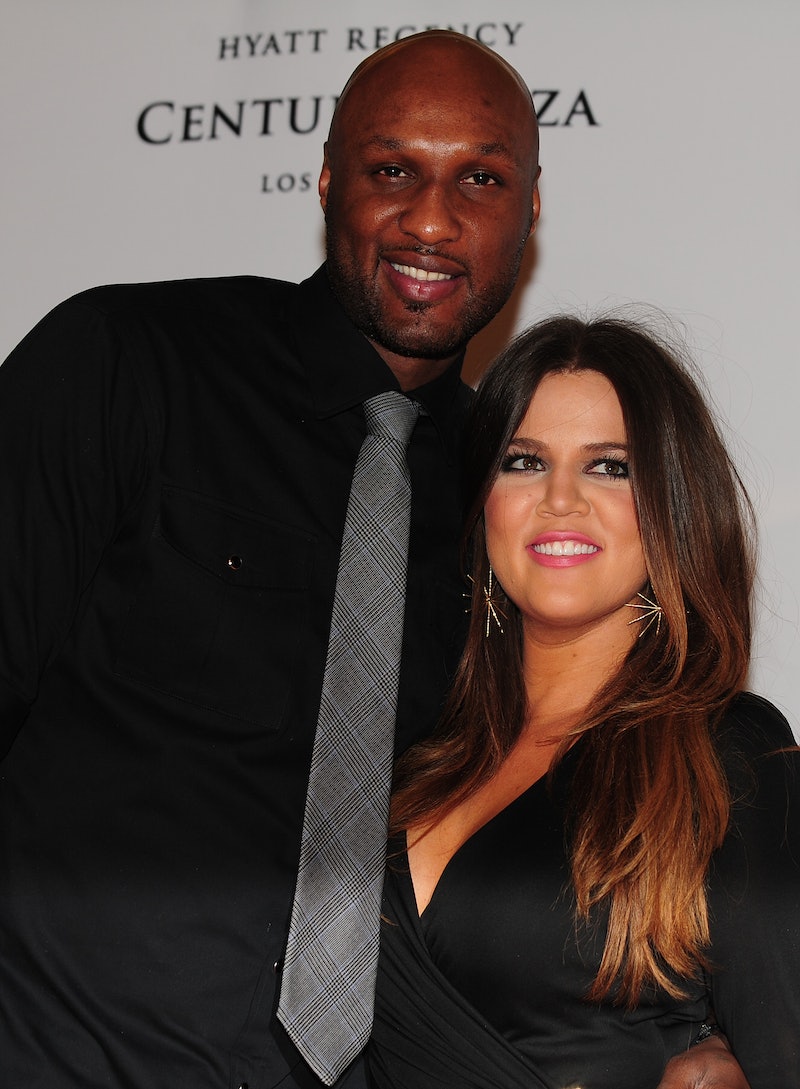 Despite a whirlwind romance involving a wedding after a month of dating, and plenty of well-reported ups and downs, Kardashian fans seemed to always root for Khloé Kardashian and Lamar Odom's marriage to eventually work out and for the two to find love with each other again. After all, the love they've had for each other was abundantly clear on Keeping Up With the Kardashians (and subsequent spinoffs, including their own show, Khloe & Lamar) and became even clearer when Kardashian rushed to Odom's side after his 2015 hospitalization... and never left. It seemed the couple might be able to withstand just about anything. That is, until Kardashian filed for divorce from Odom for a second time, according to multiple sources. It's sad, yes, but it's honestly for the best.

Bustle has reached out to reps for Kardashian and Odom for comment, but has not received a response.

Kardashian and Odom's struggles have been very well-publicized, due to their status in the public eye. Kardashian has also spoken out numerous times about pretty much everything that has happened in their relationship — from her fertility struggles to Odom's hospitalization and recovery, and their desire to work things out. It's definitely an understatement to say that their marriage has been a roller coaster ride from the get-go. But with news that Kardashian has reportedly filed for divorce yet again, it feels like a sigh of relief, truthfully.

The pair have been through a lot together, and there's no denying that any marriage comes with highs and lows. I mean, isn't that why couples vow to love each other "for better, for worse, for richer, for poorer, in sickness and in health" at the altar? It's the hallmark of marriage as an institution, and regardless of how people may feel about Kardashian, she certainly seemed to embody this in her unending devotion to Odom's care in the past few months. Even though they were estranged, she simply never stopped caring for him, which spoke volumes about the kind of person she is and the kind of love they had.

But, especially for Kardashian's sake, those kinds of extreme highs and lows simply aren't healthy — nor sustainable — burdens for one person to take on. The 31-year-old has been vocal (especially on social media) about her feelings, often posting cryptic quotes to Instagram and Twitter about heartache and disappointment, which have naturally led fans to believe they're about her relationships, either with Odom or with ex-boyfriends James Harden and French Montana.

Kardashian has insisted that fans shouldn't assume she's referring to anyone specifically in these posts, but it's pretty clear that she's dealing with a lot emotionally and likely has been for a while.

It's impossible to speculate on Odom's commitment to his recovery, but with multiple reports in the past several months indicating that he has been spotted out and drinking while still recovering, it's definitely easy to imagine why Kardashian might be ready to end their marriage for good.

Kardashian has certainly been put through the wringer since she married Odom in 2009, and she's been pretty candid about all of it, which can only serve to help others going through similar situations and also to help her heal. But she also needs to take the time to take care of herself, which it seems like she's doing, based on her recent essay for Lena Dunham’s Lenny newsletter.

In the essay, Kardashian writes,

At my core, I don’t believe in divorce. But I came to a point in my marriage where I had to make the choice to take care of my own mental and emotional well-being in order to protect myself and my happiness. I am at peace with that decision and do feel like I honored my vows to the very end.

Here's hoping that this latest divorce filing means that Kardashian is finding the peace and closure that she most definitely deserves, and that she finds happiness within herself for the future.