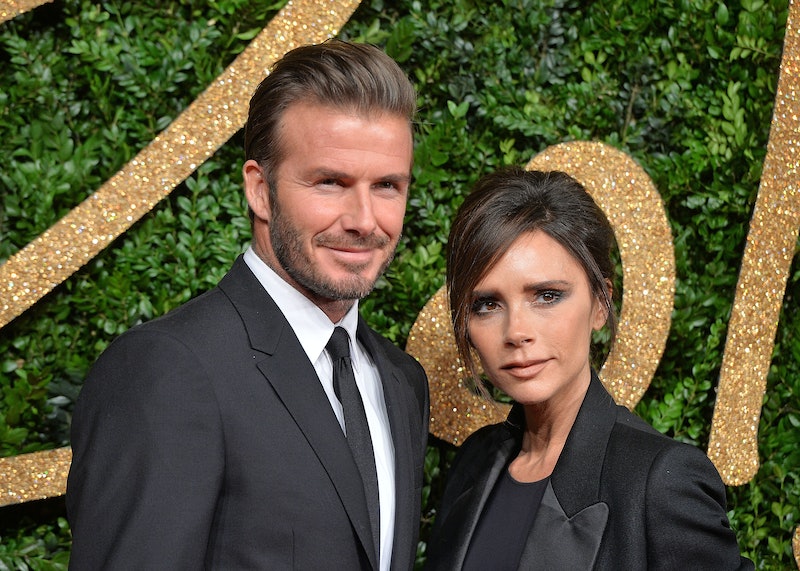 Attending weddings is a pretty polarizing experience for many people. Some people (myself included) love nothing more than getting dressed up to the nines and enjoying a fun date night out, with a (hopefully!) open bar and dancing. Other people absolutely hate weddings and would rather curl up on the couch than enjoy a night dancing to "Y.M.C.A." with a blow-up guitar and glow sticks in hand. I totally get it. But videos Mario Lopez recently shared of Victoria and David Beckham dancing at Eva Longoria's wedding to José Bastón will make you realize that even the coolest, chicest celebs aren't immune to the power of an '80s cover band and free drinks.

Much has been said about the pair over the years, most specifically Victoria, who has a reputation for being kinda "too cool for school." She's not a fan of smiling in photos, and her penchant for impossibly sky-high heels and high fashion at all times makes her seem somewhat aloof in the public eye. She'd never be caught dead rocking pajamas to the airport (or anywhere, really) but I love that about her. So these videos posted by Lopez are hilarious and prove that the Beckhams definitely know how to cut loose.

In this video, Longoria is the center of attention (obvs), but it's Lopez and Victoria rocking out to Wham! that is truly the best part. This is literally everything I never knew I needed in my life. Of course, the Spice Girls singer was good-natured about her good pal's wedding, even kicking off her famous heels to slip into a pair of comfy Uggs, all in the name of friendship. Victoria and Longoria posted a cute photo of their feet in the Uggs, with Victoria captioning it, "I can't believe she put me in Uggs!! You can't say no to the bride!!!!" No, girl, you definitely can't.

Lopez also snapped a video of Victoria's hubby cutting loose, drink in hand, which is equally hilarious. The group was dancing to Rick Astley's '80s hit "Never Gonna Give You Up," and by the looks of it, it's David's jam.

Finally, Lopez posted a video of himself and his wife, Courtney, breakin' it down with none other than Ricky Martin, who's clearly got the moves.

The Longoria-Bastón nuptials seemed like a complete blast, and it's so great to see the fun side of one of Hollywood's sexiest couples ever. I'm filled with so much FOMO that I wasn't invited. I'd love to be a third wheel on a Beckham wedding outing.