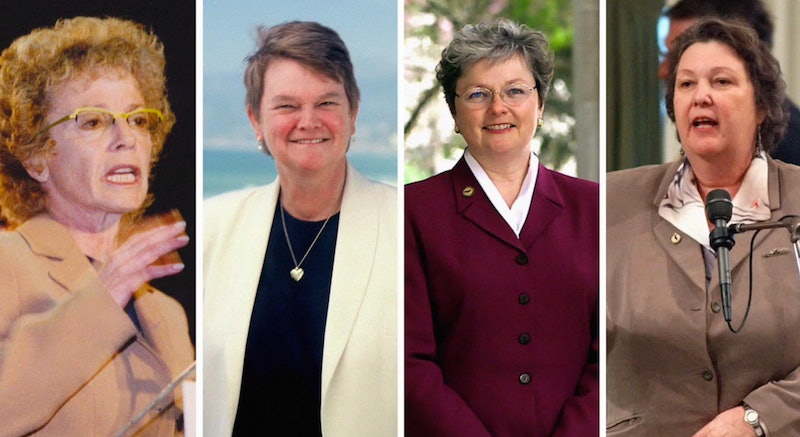 When it comes to must-see feminist cinema, there's one clear pick for this year: the Political Animals documentary focuses on four lesbian lawmakers Carole Migden, Sheila Kuehl, Jackie Goldberg, and Christine Kehoe, who after being voted into office in California, battled for gay rights in the mid '90s, when promoting homosexual freedom wasn't a priority. "You learned very early that it doesn't pay to be a good girl. You need to be a bad girl," intones Sheila Kuehl in the trailer.

And no wonder Kuehl didn't feel at liberty to toe the line: in the words of the LA Film Festival's description of the film "As one of the first openly gay representatives in California’s history, Kuehl endured lectures from her fellow representatives comparing gay people to cattle and pedophiles." If progress felt like a fight, that was probably because it was one: forging a legislative path for gay rights and authoring laws, in the words of the trailer, "which changed the course of LGBT history."

But this documentary looks as entertaining as it does worthy, with a section of the trailer showing a male politician defining homosexuality as "the most dangerous lifestyle in America... far worse than smoking or driving without a seatbelt," and Migden describing an unnamed mayor asking her to explain the logistics of a glory hole to them.

As anyone who's familiar with the good work of Leslie Knope on Parks and Recreation will know, when hard-working women get involved in politics, things get exciting. Migden's efforts to change policy lend themselves well to cinema: despite being diagnosed with terminal leukemia after just one year in office, Migden hid her disease even though she'd been given a projected three-five years to live. She then went on to author legislation for domestic partnership in California, providing benefits to the LGBT community and unmarried senior citizens.

Sheila Kuehl introduced the The Dignity for All Students Act — AB 222, which aimed to protect public school kids from discrimination on the basis of their sexual orientation, and went on to sponsor a bill to protect schoolchildren from instructional materials that were prejudiced against a gay lifestyle. Goldberg was the author of bill AB205, which expanded a 1999 bill that gave same-sex couples some of the same rights as married couples, extending "a new range of rights and responsibilities to gay and lesbian partnerships: legal access to family court, community property settlements, alimony, child support, the right to make funeral arrangements for a deceased partner and the right of one partner not to testify against the other."

It's hard to believe that these women accomplished so much in a time when prejudice against the LGBT community was so rife. Even just watching the trailer, whether you identify as LGBT or an ally, makes you feel that most empowering of sentiments: that everything is possible, and, even as a gay woman in an age that wasn't so enlightened as now, women could still move mountains.

So whatever you're up to this summer, make sure you don't miss it: the documentary will be premiering at the Los Angeles Film Festival on June 4, and you can buy tickets in advance here.