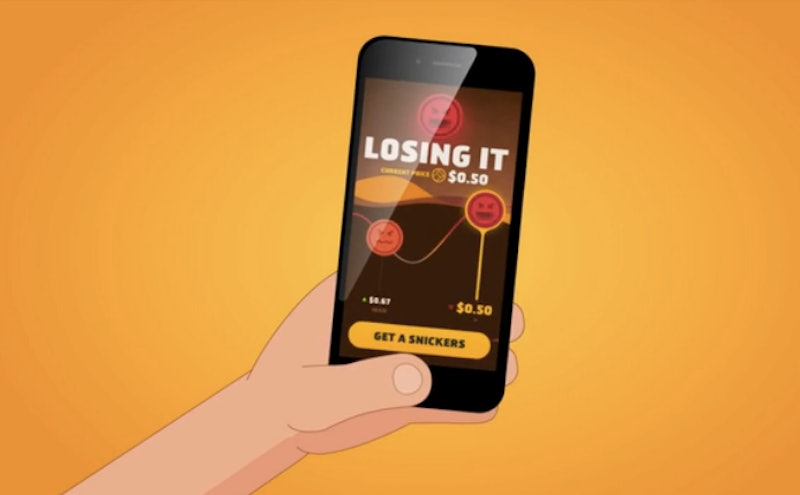 Australia already has so many awesome things — kangaroos, wallabies, didgeridoos, the Hemsworth brothers — and now they even have cheaper Snickers. The candy giant Mars has just launched an advertising campaign throughout the land down under where the Snickers bar price changes based on your mood (rather, your collective mood, according to the Internet).

Snickers has launched many zany advertisement campaigns accompanying its "You're Not You When You're Hungry" tagline (I can never un-see Willem DaFoe dressed as Marilyn Monroe). Now, once again, the brand is showing its cracked sense of humor by introducing the "Snickers Hungerithm." The program claims to measure the amount of rage on the Internet at any given moment and adjust the price of the product accordingly. The angrier the Internet, the cheaper the sweet sweet candy.

The brand explained to AdWeek, "For example, if Donald Trump receives Republican Party endorsement, the price of a Snickers could plummet to 50 cents." Though not even nougat topped with peanuts and gooey caramel, covered in milk chocolate can get the taste of Trump out of one's mouth.

The brilliant idea was created by Melbourne-branch of Clemenger BBDO, and according to AdWeek, this "Hungerithm" involves very real math and data — it "is built on a 3,000-word lexicon and analyzes around 14,000 social posts a day. It even understands slang and sarcasm." The campaign is running through June 27 in all 7-Eleven stores.

Prices can drop by a whopping 82 percent, and to see it for yourself in real-time, log in and check out Snickers Australia's site. When I entered the site at 1 p.m. the Internet was "frowny" and the price of the candy was a mere 99 cents. Only 10 minutes prior, the Internet was "crabby" and the price of a Snickers bar was $1.09. To achieve this diagnosis the site showed that it had analyzed 34 randomized social media posts.

Monitoring the price of snickers bars on their app has a similar feel to checking prices of stocks. To take advantage of the price drops, click the "get a Snickers" button on the site, which will produce a barcode coupon to redeem your discounted candy at any of the 630 7-Eleven locations. Twitter is abuzz, calling the way the campaign integrates marketing with point of sale "genius," but some might feel that the campaign is a little twisted. While the advertisers hope to cheer people up with discounted candy, they are essentially rewarding the public whenever bad things happen.

To see the full "Hungerithm" explanation, check out their adorable video:

All the same, the overall response is positive (who doesn't love cheap candy?) and Mars is considering expanding the campaign to other countries next year. Snickers Marketing manager Renee Lewington explains, "We're hoping this shows consumers that Snickers is on their side during trying times, and we plan to satisfy even more hungry consumers by rolling the Hungerithm out globally in 2017."

Psst, check out our podcast, The Chat Room, for talk about all things Internet.

At 1:30 p.m. the Internet was angry again and the price of Snickers had dropped even further to 78 cents. Whether you are a fan of the sweet stuff or not, I have to admit, watching the price go up and down is pretty entertaining.

More like this
How To Change Your Instagram Bio
By Emma Carey
This Viral TikTok Trend is Exposing Everyday Scams
By Sophia Moore
American Girl Doll Memes Are Going Viral On Instagram & Tiktok
By Emma Carey
What Is A “Softboy?” The TikTok Term & Aesthetic, Explained
By Courtney Young
Get Even More From Bustle — Sign Up For The Newsletter