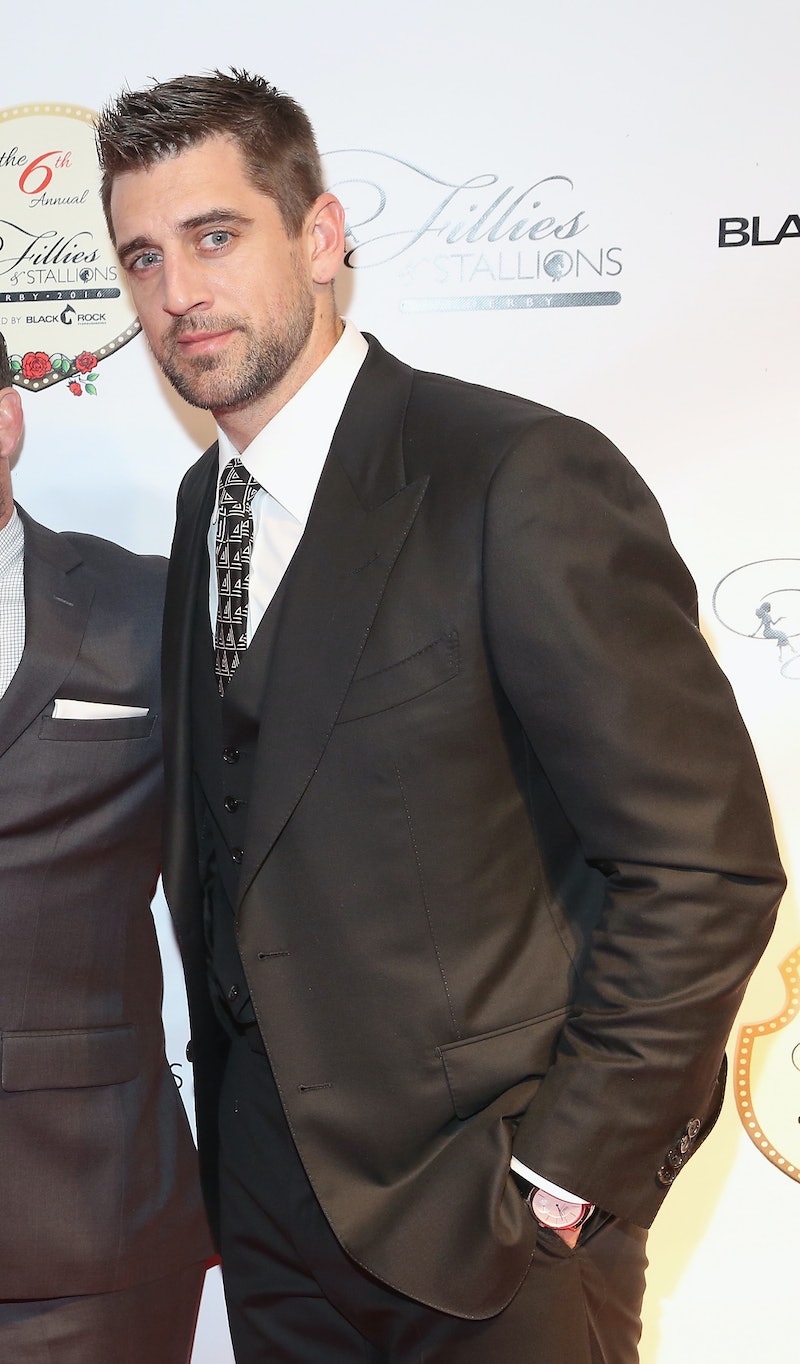 Every contestant on The Bachelorette has their own unique history, whether they are a former marine, a software salesman, or if their employment is just "Canadian." Bachelorette contestant Jordan Rodgers has his own history that he's confronting on the show — Jordan is coming to The Bachelorette after spending years attempting to get into professional football, eventually being signed as an undrafted free agent to the Jacksonville Jaguars before being waived shortly after according to Fox Sports. Although Jordan had made a team, it was hard for media outlets (like in that Fox Sports article) to stop comparing him to older brother Aaron, Quarterback for the Green Bay Packers. Much like the Scott Evans to Aaron's Chris Evans, Jordan got the short end when it came to the NFL. However, now that Jordan's getting his own shot in the spotlight as a contestant on The Bachelorette , what does Aaron Rodgers think of his baby bro joining the world of reality TV?

Aaron Rodgers, on an episode of his short-lived podcast Tuesdays with Aaron, hinted as to why he may not talk about his brother much. "I like my anonymity," Rodgers said on the show, as reported by Isthmus. "I like my privacy, I like being able to be the quarterback during the week but during the off-season be able to do what I want to do and not be in the public eye." It's understandable that Aaron would not want his family life mixing with his public life. His distancing of himself from Jordan may actually be an act of kindness, allowing Jordan to work to define himself outside of his older brother's large, padded shadow.

When Aaron does talk about his younger brother, it's in a friendly manner. He spoke on his podcast about growing up and working with Jordan to clean their aunt's llama pens, followed by "coyote watching, whiffle ball, lizard-hunts, hikes, and Sega Genesis R.B.I. Baseball." The matches their father's recent interview with KRCR TV that "[Jordan] loves adventures." The only barb or challenge that Aaron threw at Jordan is was a podcast statement that "[Jordan] is not better than me at video games, I take a lot of pride in that."

Jordan has plenty going on for him outside of football. His own accomplishments may not be as prolific to many sports fans, but Aaron can't say that he was in Pitch Perfect 2. Jordan, however, was 100 percent in the film Pitch Perfect 2 . And, Aaron may have reached "250 passing touchdowns faster than any other quarterback ever," according to CBS Sports, but you don't see him charming the heart of JoJo Fletcher, and by proxy all of America, on The Bachelorette.

Jordan Rodgers is defining himself on his own through The Bachelorette, and surely if Aaron is watching it's likely from a supportive, brotherly place. He might fast-forward through any and all makeout sessions, though, it is his brother after all.

More like this
JoJo Fletcher & Jordan Rodgers Got Married In A “Playful & Fun” Wedding
By Grace Wehniainen
What Is Jeanie Buss' Net Worth? The Lakers President Is Uber Rich
By Hugh McIntyre
Kylie Jenner Roasts Kendall For Her Cucumber Cutting Skills On TikTok
By Jake Viswanath
Twitter Has Very Mixed Feelings About The New 'American Idol' Winner
By Jake Viswanath
Get Even More From Bustle — Sign Up For The Newsletter