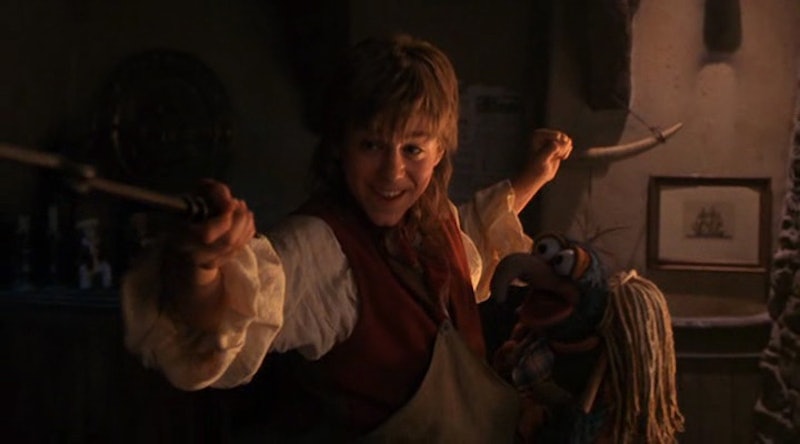 In 1996, the world finally got what it needed: a musical action version of Robert Louis Stevenson's classic children's book Treasure Island, complete with an added helping of the Muppets. It was a great film, thanks in part to Kevin Bishop — the man who played the film's protagonist, Jim Hawkins. While it must have been hard to compete for the audience's attention with charmers like Miss Piggy (who assumed the role of Benjamina Gunn — a female version of the castaway in the book) and Kermit the Frog (who played Captain Abraham Smollett), Bishop did a sterling job, with his role acting as a springboard for more adult work afterwards. In fact, Muppet Treasure Island was Bishop's first feature film role ever — sort of leading me, and I'm sure many other fans to wonder: Where is the man behind Jim Hawkins From Muppet Treasure Island now?

Hey. I'm getting ahead of myself. The British actor has enjoyed a whole range of different acting opportunities in his post-Muppet Treasure Island life, but his roles have been so varied that you may not have even noticed it was him.

Post-Muppets, Bishop has worked in theater, portrayed a late, great comedian in a biopic drama, impersonated Tom Cruise, and even landed his own comedy show. Clearly, life minus Kermit et al. leaves you enough time to pursue interests, all the interests. But how did all this start? Let's go back to the beginning...

In 2002, Bishop Played Dick Whittington In The Pantomime Of The Same Name

And this was shown on the British TV channel ITV. Kevin Bishop is great because he's VERY CHEERFUL AND ONLY SEEMS TO SPEAK IN A JOLLY BELLOW. Perfect for panto.

In 2005, He Played The Late British Comedian Dudley Moore In A Touring Drama

The piece, titled Pete And Dud: Come Again, centered on Moore and fellow Beyond The Fringe comedian Peter Cook's troubled relationship. It came to life as an Edinburgh Fringe performance but he also performed it in 2006 at London West End's The Venue. The Guardian remarked that Bishop "and Tom Goodman-Hill do considerably more than merely impersonate the comedy greats" and that "it all adds up to an affectionate and yet perceptive evening." Sounds charming, I want to see it.

Bishop was nominated for a BAFTA on the strength of this performance, so there's that.

In 2008, Bishop Launched His Own Comedy Series, The Kevin Bishop Show

The show's principal characteristics are that it's really, really fast with lots of short sketches and that it boasts the graphic of a person channel-surfing, flicking through different options on Sky. The comedy world clearly loved this, nominating Bishop for Best New Comedy at the 2008 British Comedy Awards. However, it wasn't all smooth sailing: the show came only second to the reality show Big Brother in numbers of complaints filed to Channel 4 about it due to the offensive nature of many of the sketches.

In 2014, Kevin Bishop Starred In A One-Man Play, Fully Committed

The Guardian refers to Bishop's "virtuoso display of character switching," in this challenging performance, which required Bishop to play many roles simultaneously. Reviews seemed to be overwhelmingly positive; clearly, Bishop's star is still rising.

So unlike so many teen stars, Bishop's body of work after his biggest Hollywood hit is surprisingly strong: his own comedy show! Award nominations here, there and everywhere! A diverse resume! Here's hoping that we see more of Bishop on the silver screen soon.

More like this
Everything To Know About 'Persuasion,' Netflix’s New Jane Austen Film
By Nola Ojomu and Radhika Menon
Peaky Blinders Won’t Return For Season 7 — But A Movie Is In The Works
By Brad Witter
Here’s Everything Coming To & Leaving Netflix In July
By Grace Wehniainen
What’s New On Netflix: The Return Of 'The Umbrella Academy'
By Arya Roshanian
Get Even More From Bustle — Sign Up For The Newsletter