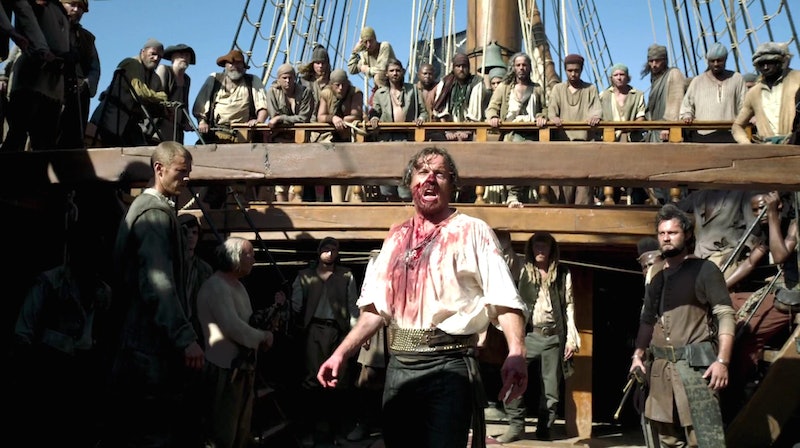 Black Sails, the Starz series now entering its second season, is known as a prequel to Robert Louis Stevenson's characters Long John Silver, Captain Flint and Bill Bones before they meet young Jim Hawkins. However, is Black Sails based on any history, or just Treasure Island? For starters, there are a lot more lady characters than I remember being in Treasure Island, so something has to give.

The character list also includes more than a few familiar names. As it turns out, the series brings a new meaning to the phrases "historical fiction" by mashing up historical figures with fictional pirates. Even Blackbeard is alluded to in the pilot episode. While it may not be as feminist-friendly as Starz' other mega hit in 2014, Outlander, the Michael Bay drama is compelling and the mix of fact and fiction makes it all the more easier to disappear into the world and live a pirate's life for yourself.

The series itself is set during the Golden Age of Piracy, when former privateers did turn to piracy, and the Urca De Lima (the Spanish treasure that all parties are searching for) was a real part of the 1715 Treasure Fleet. Want to read more about the characters that can't be found in Robert Louis Stevenson's novel? Or Muppet Treasure Island, if that's more your speed and style. Here are four characters that you can find both on your television screen and in the history books.

One of the most famous female pirates in recorded history, Anne Bonny was an Irishwoman who ran away to a life of crime on the high seas. She became involved with Jack Rackham, her companion on Black Sails, after marrying a sailor turned informant named John Bonny. Rackham offered to pay Bonny to divorce his wife, but he refused. So, Anne ran away a second time. Her disposition on the Starz series matches the legends about her. She was also one of the only pirates from this age to escape a hanging.

Anne's lover, Jack Rackham, was equally well-known in pirate lore. He's the one who designed the Jolly Roger "skull and crossbones" flag that we commonly associate with piracy. He won his nickname by wearing a suit made entirely out of expensive fabrics that were illegal for lower class citizens to wear. You can see why the rebellious Anne fell in love with him.

The third member of Nassau's antagonist trio, Captain Charles Vane, is also ripped from the history books. He really did have Calico Jack as a quartermaster, who eventually succeeded him as Captain.

First of all, what a name for a pirate, am I right? Anyway, Hornigold had many professions over the years. He was a pirate. He was a privateer. Benjamin Hornigold was also a pirate hunter, and Captain Vane was his target. This may explain why, on Black Sails, he is willing to assist Captain Flint. Truth and fantasy are woven together quite intricately on this series.

Finally, joining the series in the second season is an associate of Vane, Edward "Ned" Low — who was an infamous pirate who tortured his victims and plundered more ships than almost any other Captain during that Golden Age. Low will be played by Tadhg Murphy.