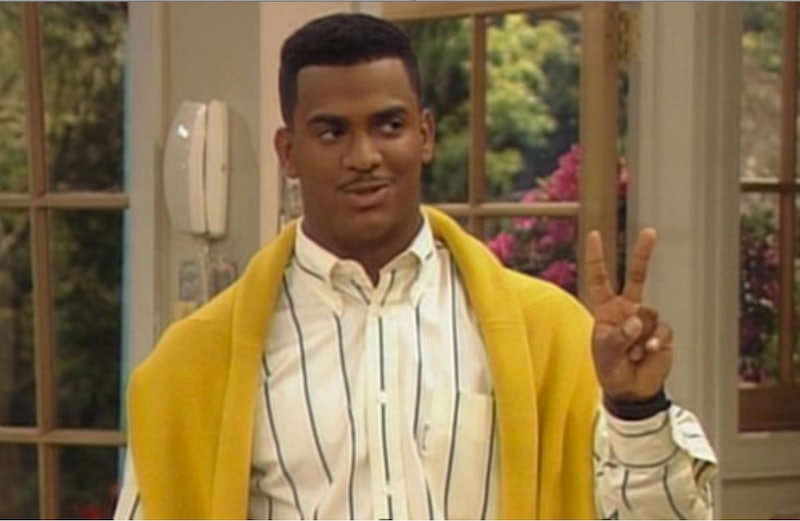 If there is one show which never ceases to rile me up into hysterics, then it's the timeless Fresh Prince of Bel-Air. The perfect blend of comedy, occasional heartfelt drama, and some phenomenal contemporary dance sequences (you know what I'm talking about), the show was and still is perfect to watch whatever your mood is. Though most people were usually Team Will, I was always rooting for Carlton, and in retrospect, there were tons of moments which proved that Carlton was funnier than Will. There are standalone quotes which continue to tickle me to this day, and then there are the particular Carlton-isms which seemed to occur on a pretty regular basis, and those also never fail to crack me up.

Will might have delivered the most punchlines and been the comedy hero on the show, but Carlton was more than a worthy equal to his comic cousin, and he was far more nuanced as well. Much of his comedy comes from the fact that he was pretty awkward, had lived a startlingly rich and entitled life, and lacked many of the life experiences which gave Will a streetwise air of cool, cheeky confidence. He could be vulgar about his financial privilege, oblivious when it came to women, and reserved (yet he was secretly a bit of an extrovert). All this made for a supremely underrated comedy character.

Here are just some of the quotes and moments which prove that Carlton could be funnier than Will.

1. That Time He Went As Macaulay Culkin For Halloween

In fairness, he managed to haul a lot of Milky Ways that night, so who's laughing now?

2. When He Validated All Of Our Feelings Toward Pizza

There are few things naughtier to do on a Friday night when you finally have your place to yourself.

3. Whenever He Was A Total Jerk About Being Rich

"I don't wanna die! I wanna go to college and poke fun at all the kids on financial aid!"

As someone who survived on financial aid throughout college, I hate to laugh at it, but I also can't help myself.

4. That Time He Had A Gigantic Freakout

Clearly one of the greatest TV comedy scenes of all time, right?

5. When He Called On The Powers Of The Grammar Police

He is exactly the sort of person you eventually wind up deleting from your Facebook friend list, but it's hilarious when he's at a safe distance on TV.

6. That Time He Got Caught Doing An On Stage Striptease ... By His Mom

It's that nipple shield which really spins your chuckles into a cackle.

7. Whenever He Tried (And Failed) To Be Will's Best Friend

Look, Will and Carlton were total BFFs. We know this. But while Carlton was more than happy to be open with his affection, Will was definitely not. Still, it never stopped Carlton from trying to provide mostly unwanted hugs, supportive shoulder leans, or even a comforting backhand, much to Will's chagrin and our enjoyment.

8. That Time That He Got Super Deep About A Cereal Advertisement

"For a long time, it gave me nightmares, having to witness an injustice like that. It shows you just how cruel this world can be. I can still hear them taunting him. 'Silly rabbit, Trix are for kids.' Why couldn't they just give him some cereal?"

Who hasn't cried at the innate tragedies of an otherwise mundane advert at 9 a.m. on a Sunday morning? Carlton's dismay at the plight of the Trix Rabbit is funny because it's so painfully true (and also because you just know that rich kid Carlton would never have given that bunny any cereal IRL).

9. That Time Will And Carlton Went Skiing

Will is a shambles, but Carlton is a pro. His confident, deliriously happy grin as he skis down that mountain provides some A+ hysterics.

10. Every Time He Was Oblivious To A Woman's Flirtations

Sandra: How about you, Carlton? Some ice cream? [seductively] I have the smooth, creamy, chocolate kind ...

It's so wonderfully, accurately awkward, and I'm sad to say that we've probably all been there ourselves.

11. When He Overreacts About Being Hospitalized

Drugs are bad. But one single failed experiment with a bad batch of them doesn't make you an addict. So, essentially, Carlton is just a virgin. Not sure if that would have comforted him or not.

12. That Time Carlton Got A Little Carried Away With Talking Via Hand Puppet

When he finally removes his hand from the puppets backside? Priceless.

13. When He Gets Electrocuted Trying To Install The New Intercom System

It happens in the first 30 seconds of the episode, and it's comedy gold.

14. And, Of Course, His Flawless Dance Moves

Did everybody else ever spend the majority of Fresh Prince of Bel-Air episodes just waiting for Carlton to break into any kind of a dance? Because I definitely did. That man is an eternal inspiration.

So come on, you gotta be Team Carlton now, right? If I still haven't managed to convince you, then I recommend you go back and rewatch some of the funniest Fresh Prince episodes pronto in order to see exactly what I'm talking about. Carlton forever.