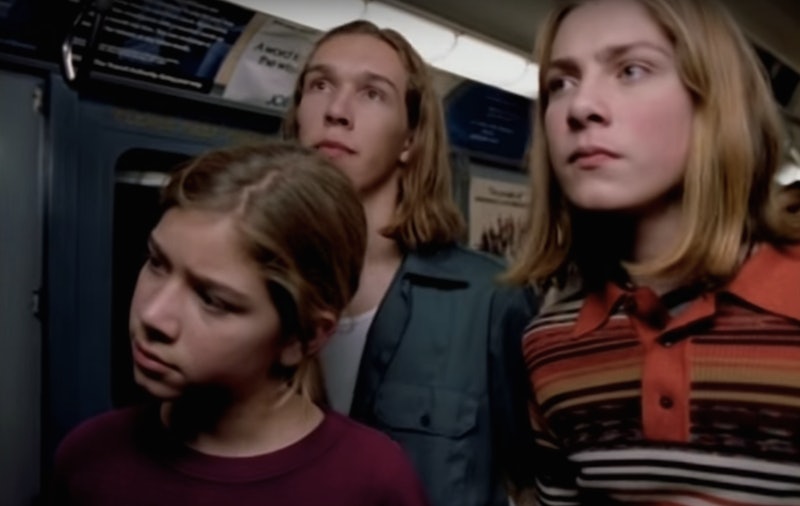 If there's one band that I remember being a big fan of with cringe levels embarrassment, it's Hanson. It's not that the band was bad or anything, but simply that my love for them spiralled out of control. Like, I'm not kidding: The extent of my obsession was insane. I collected foreign magazines with them on the cover, I made my own T-shirts with the band on them, I drew their band logo onto my school bag, and I wrote "Mrs. Taylor Hanson" over anything and everything as though my belongings could magically and legally pronounce us husband and wife. I was woefully uncool about it all, and it's painful to remember (why am I even telling you?), so to listen back to Hanson as an adult has felt like peeling off the faux-cool veneer that I've cultivated as an adult to expose my awkward, obsessive and distinctly lame interior.

What I've realized as an adult though is that, actually, Hanson were a pretty great band. They were talented, thoughtful, and wrote songs that were bewildering and catchy in equal measures. For those of us who were super-fans of Hanson, this comes as a distinct comfort; of course we were obsessed, they were awesome. There are, actually, more than a few things which do stand out when listening to the band as an adult:

1. They Had So Much Extreme Existential Angst

Who knew that Hanson were such philosophers? Whilst their contemporaries were happy to just sing generic love songs addressed en masse to people called "baby," Hanson delved deep. "Weird" is a razor blade against my fragile emotions, you guys. It's basically the musical equivalent of that moment in The Breakfast Club where Emilio Estevez tells the group, "we're all bizarre, some of us are just better at hiding it." With lines like "when you live in a cookie cutter world/ if you're different you can't win/ so you don't stand out but you don't fit in...", the song is all about how we're all different but that some people are really different and they get treated super unfairly for it. I get it, guys.

2. Their Love Songs Are Kinda Weird To Listen To Now

Hearing 14-year-old Taylor Hanson sing that he's going to come to me when "the night is dark and stormy" is a little creepy. Which is a shame, because 9-year-old me thought that was the cutest thing in the world. Having said that, I do often feel like my "soul is dying" and that I lack the "strength to keep trying" as suggested in the song, so I don't know, maybe we could all just hang out and play Monopoly some time?

3. Hanson Just Wanted Everyone To Get Along And Be Happy

For the record, "Where's The Love" is Hanson's best song. It was clear to me when I was a kid and it remains the case even now. The song also cements something which is clearly present in so many of their songs: they just want humanity to chill. It's like they picked up the peace baton that John Lennon had left for them and sprinted the musical relay with it. These boys are so pure at heart and full of peace and love that they feel almost alien to me; has modern culture become that cynical? Why can't more kids be like Hanson? *Shakes fist at cloud like Grandpa Simpson*

4. They Should Never Have Included Scratches In Any Of Their Music

I'm sorry, but do you see any of the Hanson brothers mixing decks and scratching vinyl? No. It sounds beyond bizarre against harmonicas and blues guitar riffs.

This isn't big news for anyone who used to love to read Hanson's lyric inlays whilst they were blasting the album, but "MMMBop" is a devastating song about loneliness and, well, death sang by a bunch of teenagers who don't even know how bad life gets yet. Listening back to the song at an age where you're waking up at 4 a.m. in a cold sweat over bills and guzzling wine to make dates seem interesting is like hearing someone throw a sparkling, glitter parade for your own personal misery.

I don't know if it was the age difference, the disparity between voices which hadn't yet broken and those which had, or whether they were just on top of their melodies, but whenever they harmonize, it's just ludicrous. Like, they must have just practiced nothing but harmonies for endless hours on end to get a harmony game that flawless.

7. There Was A Song On Middle Of Nowhere About A High School Murder Mystery?

I used to be obsessed with this song. After managing to listen to "Where's The Love" and "MMMBop" enough times to feel insane, "Yearbook" swiftly became my third favorite Hanson song. I never knew what it was about except that there was a kid called Johnny who wasn't available on the day that the yearbook photos got taken, there was a blank space where his photo should have been and that Taylor Hanson wanted answers for it. "There's a lying in your silence, tell me where did Johnny go?" the three brothers ask over and over again to a seriously dramatic melody which includes a string section and piano. It's totally about a murder right? Johnny got murdered. Or, he just moved schools? It's an enigma, that's for sure, and one that I dearly hope David Lynch puts to film one day.

And there's nothing wrong with that. I was and still am one of those deeply awkward people (and maybe so are you? Own it!) and you know what? "This Time Around" is the kind of song which unites people around pizza and beer, and when someone inevitably asks you, "oh hey, this song is kinda great! Who is it?" you can tell them, with pride, "it's Hanson. You're now a Hanson fan. I made that happen." And that's how friends for life are formed.

9. Their Video For "The River" Is A Perfect Titanic Parody

Not only does it star Weird Al Yankovic but it also has a guest turn from Gloria Stuart (aka, Rose as an old lady) as a Hanson super fan, complete with the tattoo to prove it, looking back fondly on her youth as a fan of the band. The song shows off the fact that Isaac Hanson (the older of the three brothers) should have totally been allowed to take lead vocal duty more often.

10. Their Voices Were Spectacular

Honestly, anyone who hated on Hanson clearly had some jealousy issues to sort out.

11. They Developed Into A Much Better Band Than I Ever Thought They Would

Seriously, why didn't I get this memo? "Thinking About Somethin'" is amazing. It's total blues brilliance with a spectacular Blues Brother homage video to go with it. (Hold up, Weird Al Yankovic is making yet another cameo? What is with that guy?) It's also super nice to hear that the summer-blues depressive pop vibes which seemed to weigh down many of their early songs in their career was instead replaced by a much happier power-pop blues tone. Hanson got happy, people. I'll sleep well tonight knowing that.

Does Hanson still grace the front covers of international music magazines? It might be time for me to start up my collection again. But as a grown up, which will just make me quirky and definitely not lame.