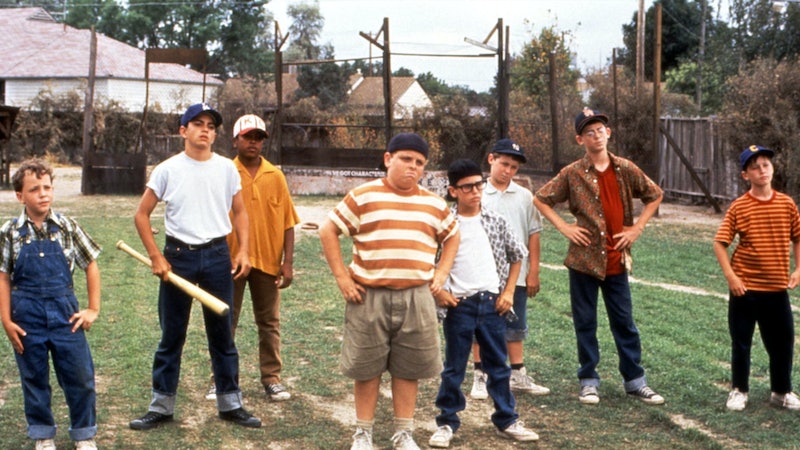 One night in the summer of 1997, I decided to watch a film about an abandoned parking lot full of sand. I know, by the way, that The Sandlot came out in April of 1993, and that I was years behind, but that's not important. What's important is that, despite my belated viewing, I learned that The Sandlot was the best movie of our generation.

When Scottie Smalls moves to picturesque Southern California in the summer of 1962, he's burdened with the very real, very difficult task of making friends as the "new kid." It doesn't matter that he's somewhat petite and, like, really not good at sports. Luckily, after some low-key but well-meaning verbal assault, a group of baseball players takes him in. The rest is beautiful, wonderful, atypical sports movie history. Because really, when you boiled it down, The Sandlot was barely even about sports. It was about growing up.

The Sandlot encapsulated youth. It's like it took the essence of what it means to be in midst of young adulthood, bottled it up, splashed it across strips of film, and then said, "Here, young friend. Watch me, and be forever changed." Do I need to lay it out again? The Sandlot was the best movie of our generation. Below, some proof.

1. How Else Were We To Know The Many Nicknames of Babe Ruth?

The Sultan of Swat! The King of Crash! The Colossus of Clout! The Great Bambino. Sorry, I'm going to need a minute. I'm pretty fired up right now.

2. It Taught Us How To Make S'Mores

"First, you take the graham. You stick the chocolate on the graham. Then you roast the 'mallow. When the 'mallow's flaming, you stick it on the chocolate. Then cover with the other end. Then you scarf." Hands down, the most important recipe I ever learned. (P.S.: Thanks for nothing, mom.)

3. It Gave Us The Best Kind Of Insults

Let the record show that, although I truly despise how "You throw like a girl" is the most cutting thing the kids could say to each other, I'm willing to look past it. Mostly because the range of other insults thrown around by this group are so good. So, so good. "You bob for apples in the toilet ... and you like it!" is a sick (and pretty specific) burn. I use it all the time now. Like, one to two times a day.

4. We Learned To Identify With The Underdog — AKA Scottie Smalls

When the movie starts, Smalls knows nothing about life and/or baseball. He can't throw, catch, or hit to save his life. To be frank, he can't do anything except wear a strangely-shaped hat, hide his anguish under that smile, and try to "bond" with his intimidating-as-hell stepdad. We related to him, and wanted to see him succeed.

5. Benny Rodriguez Was An Important Character

So yeah, it's safe to say that Smalls's life is a real downer until Benny "The Jet" Rodriguez saunters in with his beautiful brown eyes and pure heart. Benny hits a baseball into Smalls's glove from 300 feet away without even breaking a sweat. Benny hits a baseball so hard that it actually explodes. What's cool about Benny — besides the obvious fact that he has impeccable eyebrows — is that he's a minority, but he's looked up to by everyone. It's not often you see that, especially in children's films of the early '90s.

It seems that Smalls is pretty screwed at the beginning of the film. He's a quiet little guy who's just been transplanted to a new area. But then something miraculous happens — he has the best summer of his life. Who would have thought?

If you were worried that Scottie Smalls wasn't going to make friends in his new hometown, you weren't alone. But your fears probably subsided shortly after he decided to join the baseball team. (Despite being really bad at baseball. Shout out to when Smalls rolls the ball back to his stepdad Bill instead of throwing it.) Anyway, because of this, you learned that making new friends actually wouldn't be impossible for little Smalls. And if Scottie Smalls could do it, so could you.

In what world would you expect Yeah Yeah to get along with Squints to get along with Ham? Oh, that's right — in the real world, where people are different, but equally valuable. What a pivotal thing to try to grasp at a young age.

8. It Taught Us Empathy

Early on, The Sandlot makes us terrified of some abnormally large/predatory dog. Only after the kids face that false fear do they understand that there's a bigger kind of beast out there: loneliness. When Smalls and Benny meet Mr. Mertle, they get a glimpse into the life of a blind man who used to be a great baseball player, but now lives alone next to a baseball field where children play. It was a powerful and confusing thing to reconcile with as a young viewer — the real hurt and perennial loneliness that some adults live many years experiencing. But the fact that we got to see that and at least attempt to understand it means everything.

9. It Was Atypical Of The Traditional Sports Story

The Sandlot stands above the slew of '90s sports films. It doesn't give baseball prominence over any of its other larger themes. In fact, it doesn't even follow the traditional trajectory of the "sports story." There's no final game and no (real) bad guys to overcome. Just a group of kids trying to learn about life.

10. Everything We Know About Being A Team Player Is Because Of This Movie

And not just in a "I'm a team player because I'm on a team" kind of way; in a way that demonstrates the importance of having your friends' backs, of sticking up for one another and following through with your word. The Sandlot taught us integrity that extended beyond that of sportsmanship.

11. It Showed Us That You Can Be Your Own Kind Of Hero And/Or Legend

I can't believe it took me this long to say it: "Heroes get remembered, but legends never die." Though Benny is the only kid who goes on to try to become a baseball legend, all the characters find ways to be their own kind of heroes. For Squints, it was tricking Wendy Peffercorn into making out with him. (Still not OK.) For Smalls, it was finding his place in the world. Even the smallest victories count.

12. Mostly, It Reminded Us To Enjoy Our Fleeting Youth — Before We Even Knew What That Meant

For the boys of The Sandlot, the summer of 1962 is unforgettable, life-altering. But it ends, like all things have to. The boys grow up and move on. Some of them get "too into the '60s." Others went out to have successful careers. When you're a kid, you think it's going to last forever, that feeling of wanting to be an adult. When you're an adult, you look back on the summers and seasons that changed your life and wish that you would have appreciated being young and unencumbered. For 102 minutes, The Sandlot pulls us into that world, and even when you go back and watch it now, you'll find that it still has the ability to do so. Which is, when you really think about it, the point of movies.