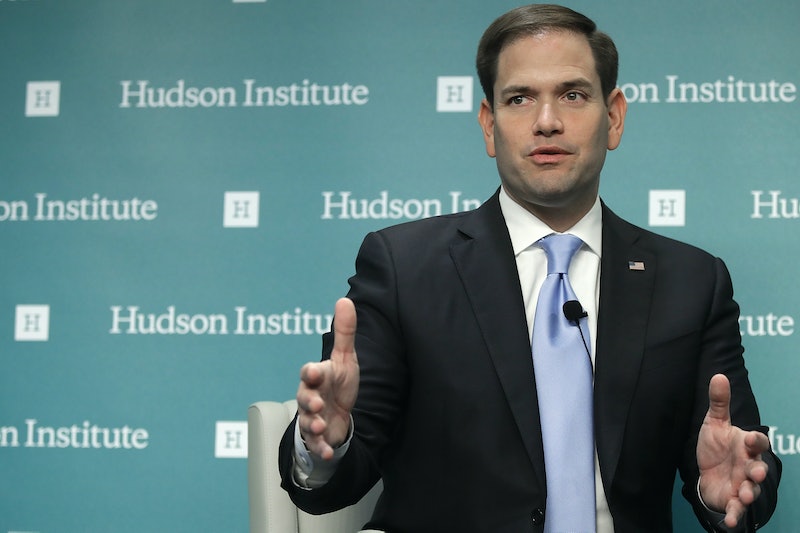 What do you do when your presidential campaign doesn't work out? It's a question that more than a dozen politicians have had to grapple with since ending their campaigns in the wake of Donald Trump's, Bernie Sanders', and Hillary Clinton's widespread success thus far. For his part, Florida Sen. Marco Rubio won't run for re-election in his home state — so is he preparing for something bigger than the Senate, or taking some time off from politics?

Over the holiday weekend, Rubio celebrated his 45th birthday. (He also went on quite the Twitter rant — more on this later.) He was one of the youngest candidates on the presidential campaign trail and, arguably, one of the candidates with the brightest political future. Rubio has amassed significant name recognition for a junior senator, but he has opted not to continue his work in the Senate — at least, not for now.

Rubio's current senate term is almost up. In November, Floridians will vote not only for president, but also for Rubio's replacement at the Capitol. Rubio's probably hoping they vote for current Florida Lieutenant Governor Carlos Lopez-Cantera, whom Rubio considers a friend. In an interview with CNN's Jake Tapper that aired Sunday, Rubio said he'd consider running for re-election if Lopez-Cantera weren't already in the race.

In the same interview, Rubio also hinted at what some of his next steps might be instead. Lately, Rubio has repeatedly pledged his support for Trump, who has officially clinched the Republican Party's nomination. Speaking to Tapper, Rubio said that he planned to attend the GOP's convention this July in Cleveland and that, if given the opportunity, he would speak on Trump's behalf.

That's quite the 180 for someone who spent months criticizing everything from Trump's policy proposals to his "small hands" on the campaign trail. Then again, that's politics. "Everything I said during the campaign I meant," Rubio told Tapper.

In the immediate future, Rubio may be working to support Trump through the general election, but beyond that, his role in politics remains unclear. With Tapper, Rubio mused about becoming the NFL commissioner, but he didn't seem too enthusiastic about becoming Florida's governor. While he figures it out, Rubio appears to be keeping himself busy on Twitter. On Friday, Rubio replied to many of his haters on Twitter, attempting to set the record straight about his campaign and his support of Trump.

Despite his unsuccessful presidential campaign, Rubio probably still has a shot at that bright future in politics — if he still wants it. After all, Trump's Twitter rants have seemed to work out surprisingly well for him so far. The NFL may be another story, though.