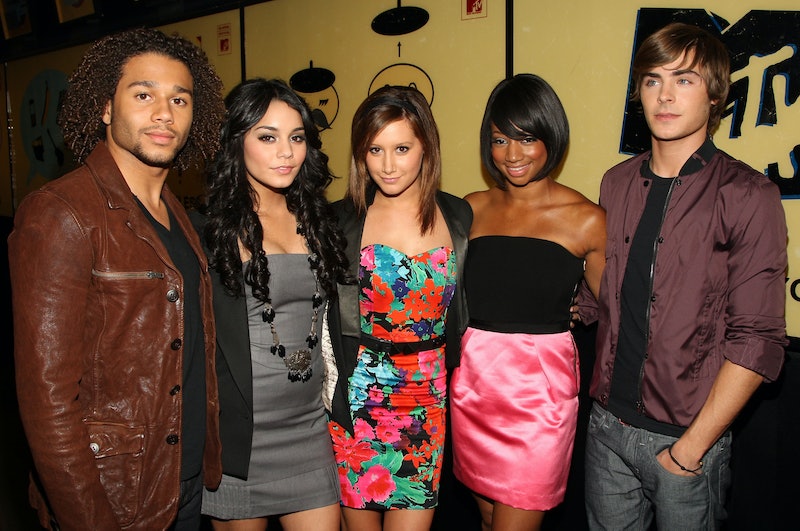 Over the weekend, Zac Efron took a moment to punch us all right in the feels, and honestly, I'm not mad about it. The Neighbors 2 star shared an Instagram throwback from his High School Musical days that'll make any former Wildcat feel awash in nostalgia. The photo shows Efron and his former co-stars — Vanessa Hudgens, Ashley Tisdale, and Corbin Bleu — looking young, adorable, and very 2008. In the caption, Efron called the time frame during which the photo was taken the "most cherished and exciting times of my life," and added about the people he calls his "o.g. crew," "love you guys forever." Aww.

It's totally crazy to realize that this crew is now all eight years older and that the Disney Channel series aired so long ago. Still, while High School Musical might seem forever ago, the photo proves that those Wildcat bonds are still alive and well. The High School Musical cast often reunites for events of all kinds, and whether it's an actual reunion for the HSM franchise, or an event where they rally support for a former co-star's new project, these celebs are seemingly always down to kick it together — and then share photos from the events that break their fans into teensy tiny pieces.

The following are some of the best times the High School Musical cast reunited and we all collectively lost our minds with the nostalgic joy it brought us. But first, take a look at Efron's latest, adorable photo:

1. When They Had Dinner With A Superfan

Tisdale, Hudgens, Bleu, Monique Coleman, choreographer Chucky Klapow, and director Kenny Ortega all went out in 2014 with a contest winner, Camilla. I can only assume that they gave her a night to remember.

2. When They Rolled Up To Support Ortega

When their former fearless director worked on a new Disney original movie, Descendants, the Wildcats showed up at the premiere. As usual, their group selfie game was on point. Lol at Tisdale's duck face.

3. When They Performed Community Service

When Alyson Reed, the actor who plays Ms. Darbus, became the new industry liaison for the L.A. Unified School District in 2015, she started an initiative called "Studio Adopt A School" SAAS, a program meant to aid in the arts departments at Los Angeles schools. Happily, some of Reed's former "students" joined in to show support; Coleman and Kayce Stroh surprised the students at Le Conte Middle School in celebration of the program's launch.

4. When They Attended Tisdale's Wedding

When Tisdale married Christopher French in 2014, her crew was there to take photobooth selfies with funny mustaches — and probably to cry a little bit at the beautiful ceremony.

5. When They Had Low Key Hangs

Olesya Rulin, who played the quiet and talented Kelsi Nielsen, shared this Instagram, showing her hanging out with Coleman and dancer Jason Williams. Her caption is too cute.

6. When They Had A 10-Year Reunion Of High School Musical

As if it wasn't exciting enough that there was a 10-year reunion of the first High School Musical (does anybody else feel a bit old?), the cast had to kick us right in the face with a picture o them checking out their old gym stomping grounds. Oh, my heart.

7. When They Saw Hudgens' Performance In Gigi

First, Bleu showed his support for Hudgens by appearing at a night of Gigi, in which she starred as the title character. Then, Tisdale presented Hudgens with the Tony for her Gigi performance. It's great that these actors support each other not only in life, but also in their craft.

Thanks to the incomparable Efron for leading me down this tour of memory lane with his snapshot of the crew in 2008. Nostalgia wins again, Wildcats.

More like this
The First Trailer For Zac Efron’s 'The Greatest Beer Run Ever' Is Action-Packed
By Charlotte Moore and Sam Ramsden
Revisit 1992’s 'A League Of Their Own Cast' Photos After The New TV Series
By Grace Wehniainen
17 Years Ago, 'Hannah Montana' Reportedly Almost Cast This 'Gossip Girl' Star
By Grace Wehniainen
Netflix Reveals First Look At Wednesday In The 'Addams Family' Spinoff Series
By Bustle Editors
Get Even More From Bustle — Sign Up For The Newsletter