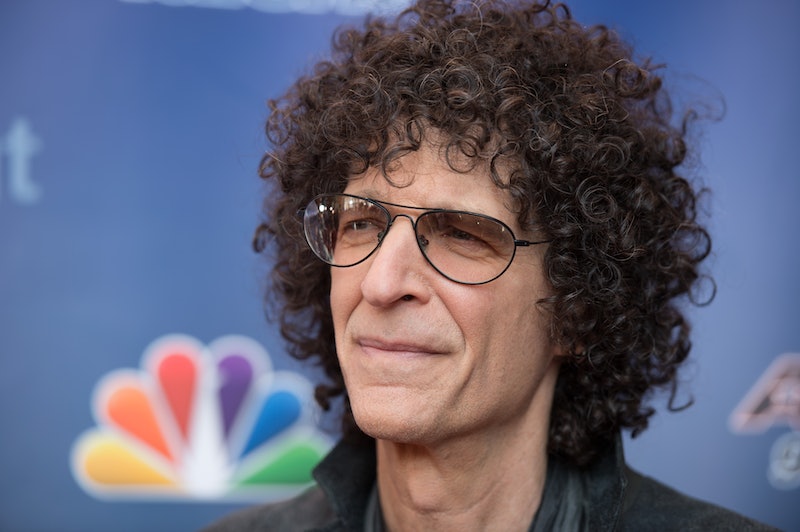 America's Got Talent is returning for its 11th season with one major change to the judges panel. Howard Stern is leaving, and Simon Cowell will be taking his place. But, why won't Howard Stern be judging America's Got Talent this time around? It seems like a pretty fun gig — you get to watch a bunch of acts, don't have to mince words when one is rotten, and then have the opportunity to say exactly what the audience is thinking when it comes to the constructive criticism portion of the show. But to Stern, it wasn't much of a dream gig.

In an appearance on Jimmy Kimmel Live! , Stern explained that he never enjoyed being on America's Got Talent. He even went as far as to say he "hated every minute" of the experience. It's kind of surprising, because Stern's reputation might be a tough, provocative shock jock, but he wound up being a total softie on the panel. Stern also had a shallower reason to leave the show — he told Kimmel, "I’m six-foot-five, and the camera man was shooting up my huge nostrils. I had no good side."

But even though Stern is leaving the show, that doesn't mean that AGT fans will have nothing to look forward to. His replacement is the reality TV MVP Simon Cowell — here are just a few reasons to be excited that Cowell will be judging reality TV competitions again.

One of Cowell's go-to comments is that he's "bored," meaning that he's already seen plenty of whatever act he's being forced to watch. And since he's actually an expert, at least when it comes to finding the perfect pop act, he has earned the right to do so.

Because You Love To Hate Him

I appreciate when someone knows what works for them and sticks to a sartorial uniform. I'm not sure how Cowell determined that he was meant to wear such a deep V-neck, but he's certainly stuck with them over the years.

And He Has Absolutely No Poker Face

You always know exactly what he's been thinking, be it good or bad, because he just can't help himself from expressing it on his face. No amount of time watching acts both good and bad can stop him from immediately expressing his inner feelings.

Because He Says What No One Else Will

Even though most of the panel prefer a softer judgement, more encouraging than constructive, Cowell is the one who's tough enough to tell a bad singer that they could use a singing lesson, an unfunny comedian that they should work on their material, or a lackluster dancer that they need better moves.

The biggest problem with Simon Cowell is that he can sometimes take too much control over the panel and make it so his voice is the only one that matters. But on America's Got Talent, the rest of the panel will ensure that he doesn't take complete control, and thus it'll be an amazing season.